Taylor Swift And Harry Styles Back Together – Can She Make It Last? 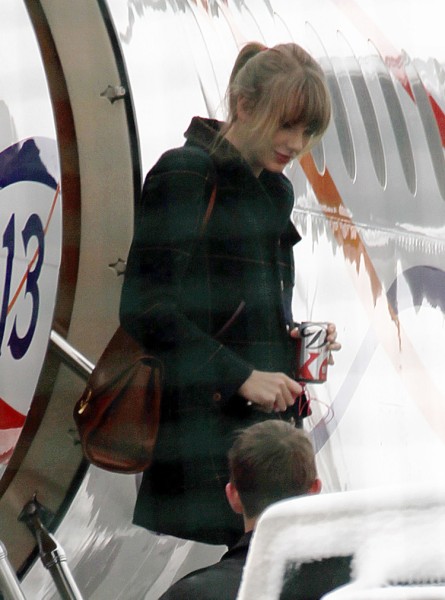 Well… technically they’re just going to be in the same room at an awards show in Cannes. Taylor Swift and Harry Styles are set to attend the NRJ Music Awards in France on Saturday and you know she’s going to be all about a reconciliation – that is if one didn’t happen already while she’s been stalking his house in London.

Check out the photos below of Taylor exiting her private plane in London yesterday. Look at the smirk. She’s in on the joke, right? That’s the thing about Taylor. She knows what we’re all thinking and she doesn’t really care. This is true love, remember? What is a little humiliation when eternal love is on the line? Whatever. She can be in on the joke as much as she likes but that doesn’t make her any less pathetic. Homegirl is chasing her man down in Europe. And while one of my favorite movies is Marisa Tomei and Robert Downey, Jr.’s Only You (watch it if you haven’t – adorable!), I’m not feeling the romance in Taylor’s decision making.  She’s the chick in Wayne’s World who refuses to believe Wayne broke up with her. I lost you two months ago. We broke up. Are you mental? Get the net!

Still… Taylor will rationalize this by saying it’s all business. She has to go to the awards show. She wanted to stop off in London to do a bit of shopping beforehand. Just because her current ex-boyfriend happens to be in both places is a random coincidence. Perhaps it’s more than a coincidence. It’s a sign from the universe that they should be together!

But here’s where Harry deserves a major shame on you. Apparently they’re staying in the same hotel in Cannes. What is that kid thinking? How can he ignore her if she’s right next door? Maybe he doesn’t want to ignore her. Maybe they really are working on getting back together. Maybe Harry is dumber than I thought. He probably is.

Are Taylor Swift and Harry Styles back together? Is that why she flew into London? Should we all steady ourselves for Haylor 2.0?