Taylor Swift Flies To London To Win Harry Styles Back, Desperate Or Cute? 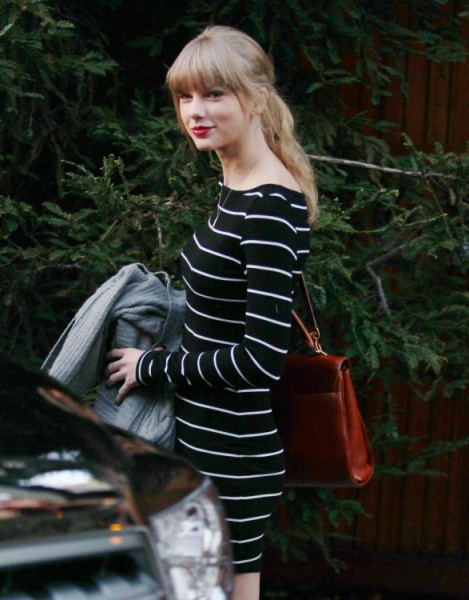 Let’s be honest here. We don’t know if Taylor Swift’s really in London to win Harry Styles back. She could easily be there to stalk him. According to British newspapers Taylor has no business reason to be there but took a private plan anyway and holed herself up in a hotel close to Harry Styles’ North London home. Either she expects some long night heart to hearts (which easily could have been done over the phone) or she brought her best pair of binoculars and nicest Snuggie with her because this is a stakeout.

In all fairness to Taylor, she told Harry this was going to happen. After Simon Cowell ordered him to call her back and calm her down she told him she needed closure in a face-to-face meeting. At the time I assumed he told her that wasn’t necessarily. Who needs face-to-face closure after two months of dating? Well, crazy people do and Taylor has done nothing but show us she fits in that category when it comes to the opposite sex.

And poor Harry. He’s been with One Direction in Japan and only has four days off in London before he has to go off somewhere else. And he has to spend probably close to all of his vacation time dealing with his psycho ex-girlfriend. But he has to listen, right? If this break up gets any worse the consequences could be dire. This is what Cowell was so worried about. No one wants an anti-Styles song right now. One Direction is riding so high. And despite all the Taylor bashing lately, she still has the power to get all her little tween fans on her side with just one catchy girl power song. So again, poor Harry. He will have to sit and listen. He will have to hold her kleenex and allow that maybe, someday in the far off future their love might be able to flourish again when they have more time and less commitments. Their love is pure that way. But will she buy it? Of course she will.

Do you think the Taylor Swift London bid could win Harry back? Do you want to see a Taylor Swift/Harry Styles reconciliation? I’m ready for the next victim.