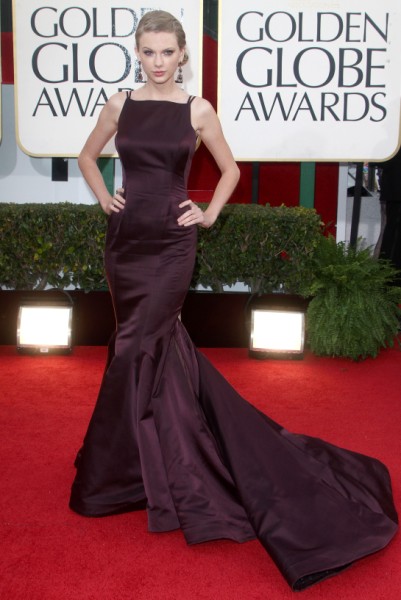 Let’s start with the dress. God, I hated it. It looked straight up prom. OK, so it was backless… tres riske! Apparently the color was pretty in person but plum just doesn’t translate well on the screen. I’m not even going to look up the designer because I don’t care. Is her body rocking? I guess. She’s really skinny but the gown did nothing to highlight her tasteful boob job. Don’t cover the puppies up. You paid good money for them! I got to go with fail on this one.

Then there was the bitch face. Taylor was throwing out some major bitch face ALL NIGHT. She posed with bitch face. She interviewed with bitch face. We get it Taylor! You’re a legitimate Golden Globe nominee! Now go back to dating and scaring off teenagers and let the grown ups have some fun. With all that bitch facing I couldn’t figure if she was annoyed when Adele beat her for best original song or if she was ultimately pissed. I’m going with pissed. She couldn’t really hide it. Rule number 1 at award shows – act gracious when you lose and surprised when you win. But honestly, who thought anyone had a chance in hell to beat Adele? Well… Taylor did which is why she  really is in her own little world.

And Tina Fey slapped her for it. I actually think Tina Fey ripping on you is similar to being touched by an angel but Taylor and I rarely see things the same way. The camera didn’t cut to Taylor when Tina told her (and the WHOLE WORLD) to stay away from Michael J. Fox’s kid so I have to assume there was some major awkwardness going on there. God bless Tina Fey for giving us the best joke even though it was the obvious one. And she was right. Michael J. Fox’s kid should be nervous around Taylor Swift. Biotch is crazy.

So all in all not the best night for Taylor Swift. Golden Globes are supposed to be fun and relaxed and she took herself way too seriously. Perhaps I just really hated the dress. Maybe she did too and that’s why her face looked botox happy. Hopefully, she licked her wounds by the end of the night and decided to listen to Tina Fey. Girl needs some me time.