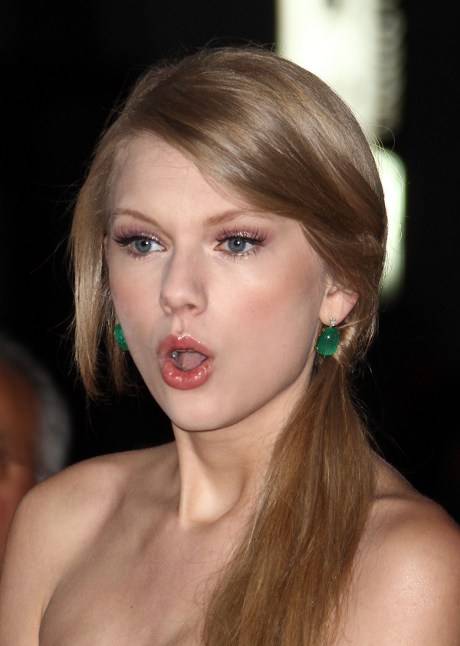 Taylor Swift, the serial dater extraordinaire and supposed Carrie Underwood hater, is supposedly making her moves on another pop sensation: Justin Bieber. He has just as much clout, if not more famosity, than our dear friend Harry Styles — and Justin Bieber also comes with something that Harry Styles does not have in in his past, something that just might pose a threat to Taylor’s shot at the big time with The Beebz. That special something is Selena Gomez, who is reportedly one of Taylor’s good friends and, obviously, Bieber’s ex. Yeah, this whole friend thing between Swift and Go? Might not last for too much longer if Taylor sinks her teeth any farther into lil’ Beebz.

Taylor has reportedly had a longtime crush on Bieber and she wasted no time in swooping in to get a piece of the Bieber cake once Selena was out of the picture — even if it meant jeopardizing a friendship in the process.

“Taylor feels Justin is fair game now,” an insider tells the National Enquirer. “She’s had a crush on him for years.”

As you might’ve suspected, this has Selena Gomez irked. Even though she and Bieber have broken up, supposedly split for good, that doesn’t mean Taylor Swift — who needs to relax after her break up from Harry Styles — should be swooping in for SelGo’s sloppy seconds. I apologize, no celebrity in this romantic love triangle is sloppy.

Poor Selena is apparently appalled and crestfallen that Taylor Swift and Justin Bieber would even consider taking this romantic step. “She’s heartbroken at the thought of the two of them getting together,” reveals the source “She’s quizzed Taylor about her intentions to­ward Justin, and Taylor says, ‘He’s just a friend – you know that!’”

C’mon, Taylor. Be nice now. Don’t fib. You and Justin have allegedly be texting back and forth — during which you’re probably confessing your love to him, planning your future marriage, and considering purchasing mansions together. It’s just the way this girl rolls, and we’re fine with it, even if her romantic antics give us mini heart attacks.

“Taylor says that as a superstar himself, Justin is the one person who knows what her life is like. She says Justin just ‘gets her,’ and she finds that incredibly romantic.”

Hmm, sounds like this is getting romantic and sparks have flown on more than one occasion, including when Justin has made special appearances at her concerts, during which he’s said, “Taylor’s such a sweet girl.” Geez, why don’t you just propose already? Do you think Selena has anything to worry about? Will the Justin Bieber/Taylor Swift relationship become a thing in the near future?