Taylor Swift Mocks Harry Styles At The Grammys – Get Over It Already? 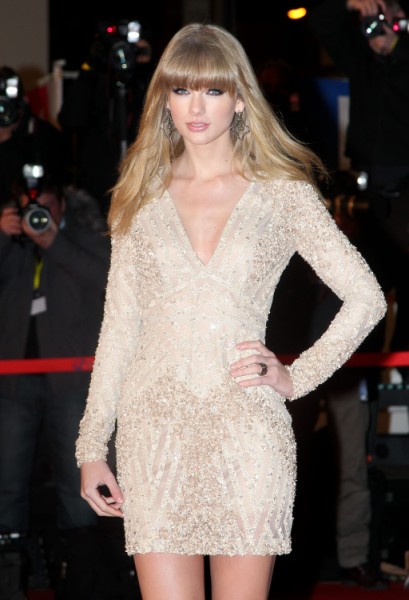 Taylor Swift may have been a loser last night at the Grammy Awards (though she did win a boring one for Best Song Written for Visual Media), she’s still proclaiming herself the winner in her epic break up with One Direction teenager, Harry Styles. According to all the British tabloids, Taylor Swift mocked Harry to start the show during her performance of We Are Never Getting Back Together.

She apparently put on a British accent when she said, “I’m sorry, I’m busy opening the Grammys and we’re never getting back together.”

Did you watch her performance? Did it convince you that the Taylor Swift/Harry Styles saga is still ongoing? I was whatever about the whole thing. The Alice in Wonderland motif was kind of lame. I just expected more from the dancing clowns I guess. And I remember thinking Is she going to reference Harry? But then at the end I remember thinking She totally didn’t reference Harry. I guess I was wrong!

But as much as I hate to call bullshit on the British tabloids’ daily shit stirring, I have to point out I did not hear a British accent. And she changed the lines of the song to give a shout out to the Grammys. I’m hesitant to make a big deal out of this and I LOVE to make a big deal out of things. Now, if the “boyfriend” in the performance had curly floppy hair and no muscles and looked like a young Mick Jagger, then sure, I’d play along. But that kid was straight up hipster fabulous. I saw nothing to remind me of Harry. Again, that’s not to say Taylor wasn’t trying to make a dig. Ordinarily, I’m just used to a very obvious Taylor Swift. If she wanted us to think she was talking about Harry I have to believe she would have shown his name in huge letters and flashing lights on the screen behind her and then tweeted about it afterwards. But maybe maturity is encouraging discretion? That’s no fun!

What did you think of the Taylor Swift Grammy performance? Was it worth all the hype?