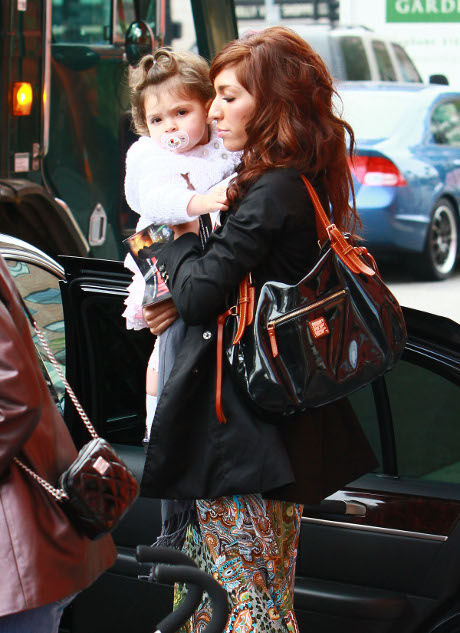 File this one under disgusting mother. Teen Mom‘s Farrah Abraham has gone from narcissistic bitch to monster mom giving Joan Crawford a run for her money. On Farrah’s latest blog, she tells the tale of her 3-year-old baby daughter Sophia’s demon unibrow. Too Fab has posted an excerpt from Farrah’s Sulia blog where she has the balls to say that she is a good mom. I refuse to quote her, but I will give you the gist of the situation.

Farrah is upset that her baby girl appears to have a unibrow. She brings this problem to Sophia’s attention. Again, Sophia is only 3 years old. Farrah attempts to remove said unibrow with hot wax. The baby touches the wax with a towel (probably because it burns) and gets fuzz all over her face. Mother of the century, Farrah, then decides to pluck the uni with tweezers while baby Sophia sleeps. This is when Farrah proclaims herself a good mom.

What the hell is wrong with her? What the hell kind of parents raised this ginormous twit? Please tell me child protective services is banging on her door right now. Does she seriously believe that she has done no wrong? Does she seriously have no idea what kind of psychological issues she has caused this poor baby? Is she looking for more attention now that her class’ Teen Mom series is over? Is she trying to be the next Tanning Mom? I have sooo many questions that need to be answered.

I have watched Teen Mom from the beginning and I can say this absolute confidence that Farrah is my LEAST FAVORITE. She has had the worst attitude to everyone around her and that’s just what they show on TV. Perhaps she deserved the slap to the face that her mother gave her.

What do you think readers? Do you know what is going on in Farrah’s mind?