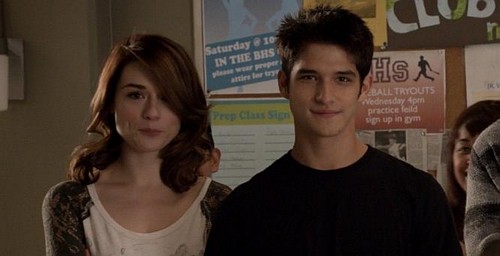 Tonight on MTV the popular show TEEN WOLF continues with its seventh episode of the third season called “Currents.” On tonight’s show, Scott’s trusted mentor and boss is threatened and Dr. Deaton, Kali, and the Twins go after Derek.  Did you watch last week’s episode? We did and we recapped it here for you.

On last week’s show, Scott and the gang underwent strange experiences when they were stranded at a motel, causing them to believe members of their own group might be the mysterious killer’s newest targets.

On tonight’s show, Allison and Scott share an intense moment while hiding from Mr. Argent.  This is the closest Allison and Scott have been in months and it looks like the two may kiss.  Why were they hiding? Well, Allison was snooping around in Mr. Agent’s drawers and found something. It looks as if Scott comes over to help with her investigation and Mr. Argent comes home early — so they’ll have to hide from the big bad Argent!

Tonight’s season 3 episode 7 is going to be an exciting one that you won’t want to miss, so be sure to tune in for our live coverage of MTV’s Teen Wolf at 10 PM EST! While you wait for our recap hit the comments and let us know what you think of Teen Wolf season 3 this year. Check out the sneak peek video of tonight’s show below while you wait for the recap!

The show opens up with Scott’s mom wheeling an injured woman into the hospital. Scott brings his mom dinner. Nobody can find the ER doctor on call. Scott asks what that means. Meanwhile, we see the doctor in the car. As she’s driving, a moth lands on her windshield. Back at the hospital, one of the twins brings in Danny. He barfs up a whole bunch of mistletoe. They wheel him back to a room. He doesn’t look good. With no doctor on call, Scott’s mom takes matters into her own hands and saves Danny — she puts in a trachea tube to help with his breathing. Danny says, “Thank you.”

The doctor driving crashes after getting attacks by a swarm of moths.

Ethan walks out of the hospital, following Scott. He says, “Look I know you’re not going to believe me, but I had nothing to do with this.” Scott, of course, doesn’t believe him. Ethan says that he and his brother immediately sought out Lydia and Danny because they knew one of them — somehow — was going to play a larger role in the end. Ethan, who clearly has a thing for Danny, says that now they know it’s Lydia. A car crashes in the parking lot. They run over to the car. They open it up and see a dead moth on the seat.

Stiles and his Dad arrive on the scene. Stiles and Scott seem to think that the next round of sacrifices (it will be three again) are healers.

Meanwhile, Derek’s house has been marked. He says, “It means they’re coming. Tonight.”

Scott’s Mom wakes up. Scott and Isaac are sleeping on the floor. They say that they were watching her — because she’s a type of healer and didn’t want her to be the third sacrifice.

In class, Stiles says that there are so many healers in that hospital, and that it will be hard to determine who goes next. Scott gets a phone call. It’s Dr. Deaton. While on the phone, a moth flies into his hand — an ominous sign. Being a druid, he recognizes this image of foreboding. To Scott, he says, “I need you to listen to me. I’m going to be taken. I need you to find me.” In his office, moths begin to overrun his windows, blocking out all forms of light. Bam. Commercial break. Wow, this is going to be an intense episode. Nothing better happen to our mystical guru, Dr. Deaton!

Boyd and Isaac walk into Derek’s lair (I like calling it a lair). They say they’ve arrived to protect him. They’re going to rig the place with electricity, to inhibit their changing and power.

Scott runs to Dr. Deaton’s office. Stiles father is already there. He says that Scott needs to tell him everything he knows.

Scott and Stiles walk into the back of the practice. Scott says that we have to tell him — everything. Stiles is immediately opposed to the idea. Finally, please tell him! He needs to find out. Stiles wonders if now is really the right time? They, after a long conversation, say that they should tell him. They walk back out. Miss Morell — who’s Dr. Deaton’s brother — is there. She’s talking to Stiles’ dad, who eventually leaves.

Scott and Stiles say that they’ll do anything to help find Dr. Deaton. Morell says, “No cop or investigator will be able to find my brother. If there’s going to be any hope, you’ll have to find someone who can seek out the supernatural.” Morell seems to have allegiances to Deucalion’s pack — though she still cares deeply for her brother. Duh.

Meanwhile, Lydia is making out with Aiden. The fire alarm sounds, breaking up their lil’ love session. Lydia tries to get out of the room, but she’s stopped by Derek’s sister, who wants her to stop seeing Aiden.

Scott’s mom thinks she has some information to help find Dr. Deaton — she tells Stiles’ father.

Stiles brings out a ouija board, thinking that this this will somehow help Lydia connect with some mysterious force. Scott hears a ticking noise and follows it down the hall. He walks into a room and finds Deucalion tapping on a desk. Deucalion says that he might be able to help find Deaton.

Meanwhile, Stiles is desperately trying to get Lydia to connect with Deaton’s energy. She holds Deaton’s keys in her hands — but sees nothing, connects with nothing.

Deucalion says that he will tell Scott exactly where Deaton is if Scott can grab the cane from his hand. But Scott struggles against this. Deucalion reveals that Scott will have a very important decision: Derek or Deucalion. One person will die tonight — and he will have to choose. He won’t have time to find and save them both. Scott yells, Just tell me where he is! Deucalion says, “I’ll give you one very important clue. Follow the current.”

Scott walks into the room where Lydia’s trying to connect with Deaton. She says, “I’m not psychic.” She says they should talk to Danny. Stiles wonders why. Scott says, “Because, he wasn’t a victim, but he was attacked last night.” With that mistletoe-barf-attack.

Uh oh, what role does Danny play in all this?

Scott’s mom talks with Stiles’ dad as they examine one of the victims in the morgue. Suddenly, she’s become the show’s resident medical examiner. She says that the marks around the victim’s wrist are a sign of being hung, suspended in the air by the wrists. She says he doesn’t have long. He needs to be found fast.

Stiles and the crew head to the hospital to chat with Danny. But Scott says he will meet everyone there. He gets a text from Allison saying she might have found something. Scott arrives at her house. Mr. Argent arrives. They run into the closet. They get quite close and Scott gets *erm* excited. Mr. Argent passes in and out. They get out of the closet. Allison shows him a map. There’s nothing on it until she runs a blacklight over it. He’s marked places where the bodies have been found and other crucial elements to this investigation. Allison thinks that her father knows where the bodies will be found.

Mr. Argent comes back in. Allison is sitting on her bed eating licorice. Scott sneaks out.

Stiles arrives in Danny’s hospital room. He nudges him awake — then sort of slaps him awake. But he’s groggy and thinks he’s dreaming about Stiles in his room. Stiles proceeds to investigate his backpack. He finds a report — a physics project. Stiles says that he might’ve found something important. He was working on a project for the science teacher. Something about “currents.” Perhaps this is why Danny was attacked — because he knew too much.

Back in Derek’s lair, covered with water (part of their plan to electrocute the Alphas), the power goes out. Their little plan seems to have failed. His eyes glow red. Boyd and Isaac asks, “What now?” Derek says, “We fight.”

Kali opens the door to Derek’s lair. She walks into the apartment. Derek and Aiden have Ms. Blake hostage. He says to Kali that he’s going to rip her throat out.

Danny was reportedly working on a project about some type of geomagnetic currents heavily influenced by lunar phases. They think that Deaton is being held int he same bank vault that Boyd was being kept in. Derek’s sister gets a text: the plan didn’t work.

Scott says that he can go save Deaton. The other should go help Derek. Scott arrives at the bank vault. But he’s blocked by a ring of — I think wolfsbane. He can’t get through. He better figure something out quick — because he doesn’t have long.

Kalie is beating up on Kali pretty bad. She kicks him with her bare feet.

Scott tries to get through the power of the circle. He pushes very very hard. Deaton sort of wakes up. He pushes vigorously — and his eyes GLOW RED. Stiles’ father shows up at the bank vault. He says, “Let me give it a shot.” He shoots down the rope.

Meanwhile, Kali kills Boyd. She leaves, saying, “Make the right choice, Derek. Join the pack. Or, next time, I’m killing all of you.”

After Stiles’ father said he remembered the celtic symbol from the bank (which he also saw in Dr. Deaton’s residence), Dr. Deaton tells Scott that his eyes glowed red. That means he’s a True Alpha — something that happens once every 100 years, and occurs only by a sheer force of will, of great virtue, and doesn’t require one to kill for power. He says that he had a feeling all along that Scott would assume this power. Hurrahh! Or wait, not hurrah, because Deaton then says Deucalion’s actually after Scott.

In the end, we also see Allison visit her Grandfather — who seems to know a lot about what’s happening. Deucalion and his pack seem to have an interesting back story, one we’ll be exploring in the coming weeks. Seems like we’ll get to find out his true motivations.

What an awesome episode! What did y’all think? Tune in next week to find out what happens next in this epic story!