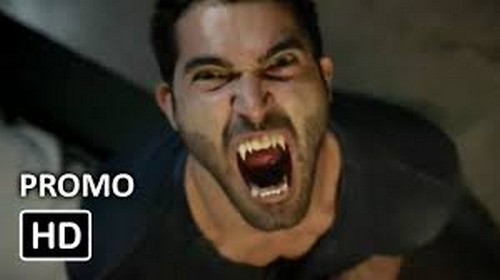 Tonight on MTV the popular show TEEN WOLF continues with its eleventh episode of the third season called “Alpha Pack.” On tonight’s show Derek and Peter are going to try to figure out how to save Cora’s life. Did you watch last week’s episode? We did and we recapped it here for you.

On last week’s show Scott and Derek must defend themselves against the Alphas while, at the same time, attempting to save Cora’s life — which will prove to be quite a feat!  Deucalion’s expert strategy is exposed to the group.

On tonight’s show with the threat growing far more personal and time running out on innocent lives, Scott will be forced to make a difficult choice in order to save both friends and family while, at the same time, Derek and Peter to figure out how to save Cora’s life.

Tonight’s season 3 episode 11 is going to be an exciting one that you won’t want to miss, so be sure to tune in for our live coverage of MTV’s Teen Wolf at 10 PM EST! While you wait for our recap hit the comments and let us know what you think of Teen Wolf season 3 this year. Check out the sneak peek video of tonight’s show below while you wait for the recap!

The show opens with Stiles slapping the living daylights out of Derek. Derek’s lying in the elevator and wakes up. Stiles tells Derek that Scott left with Deucalion. Peter and Isaac are driving in the getaway car. Allison and Chris Argent come running out. Peter leaves the car. Derek comes driving up — without Stiles. Stiles stays at the hospital to hold off the cops. Derek fills everyone in on what’s gone down.

Derek stands over Cora. Isaac says, “She’s dying isn’t she?” and asks what he’s planning on doing? Derek says he doesn’t know what he’s going to do. Isaac starts yelling at him, saying that he’s doing nothing, that everyone else is out there dying while trying to beat the woman he’s been “rolling around in the sheets with.”

Peter comes out and gives one of his weird speeches, saying that anger is just a method. Isaac runs out of Derek’s place and states he’s going to go help the others since Derek refuses to do anything.

Stiles tells the Argents about the name written on the door. Chris tells Stiles not to overreact and not to lose hope. He says that he thinks Jennifer is still planning, plotting, and calculating. Waiting. Chris is “one of them,” a guardian, but instead of running away from Jennifer he says that the number one mission right now is to locate Melissa and Sheriff Stilinski.

Chris, Allison, and Stiles try to find out the location of the next sacrifice. They arrive at the conclusion that maybe Lydia can help.

Allison and her father suit up with weapons. Chris says to keep an ear out for Scott.

Peter tells Derek that there might be a way to save Cora. He says he’s heard it’s possible that an Alpha might be able to fully heal a member of their pack; he says it might work and it might not work, but if it does work it might kill him. And if it does work, there’ll be a cost: he will no longer be an Alpha. Peter smirks at the thought of this.

Chris, Allison, and Isaac enter the bank vault. Chris immediately takes out his taser and shocks Isaac. He then proceeds to lock up Allison. She shouts, “What are you doing.” He responds, “I’ve known for a long time that she wasn’t just following the currents [magical energy], she’s been in sync with them.” As Chris drops his gun, Jennifer walks in. “Now this is a sacrifice,” she says with a smile.

Stiles talks with Lydia. She asks what she can do to help. She says she understands what she is but she doesn’t know how to turn her abilities on and off. She wonders why, after Jennifer found out she was a banshee, why she didn’t decide to kill her.

Isaac frees Allison. She breaks down.

Derek considers his options. Peter sort of urges him not to go through with it because he says that this might be exactly what Jennifer wanted — to get him out of her way so she can have the Alphas to herself.

In school, Stiles gets a text. It’s from Isaac. He tells him that Allison’s father’s gone now too. He has a panic attack.

Chris wakes up in the nematon, right beside Melissa and Sheriff Stilinski. Jennifer walks down the stairs. She has all three sacrifices now . . . “Argent. The French word for silver,” she says. “Interesting how truth becomes altered by legend. When it’s not actually the metal silver that kills werewolves but the actual family.”

She says that she wishes there was another way besides sacrificing innocents, but she admits there is not another way.

Back at the school, Stiles is stressing out. Lydia tries to calm him down. She tells him to think of something happy and then kisses him on the lips. He relaxes, calms himself. “How’d you do that?” he asks. “I read once that holding your breath can stop a panic attack. SO when I kissed you, you held your breath.” He says thank you, and both are taken aback. Stiles has an epiphany. They need to see Ms. Morrell. They go in to her office but she’s not there, and they think she might be missing because she knows too much about everything, being that she herself is a druid.

Stiles finds Lydia’s file, and inside it is a drawing of a tree. Lydia pulls out her notebook and she’s been drawing a picture of the same tree over and over and over again. She’s been drawing the nematon. Stiles flips it over: the tree isn’t a tree, but a root system, with a stump above ground. It’s the nematon. Stiles figures this out and says, “I know where they are.”

Lydia and Stiles leave the school, but Stiles is impeded by the FBI agent, who begins interrogating him. He says that it’s fine if he doesn’t want to help, but that he doesn’t want him staying alone tonight and asks if he has anyone to stay with. “Yes.” Dr. Deaton walks in and saves him.

Ms. Morrell is running through the forest. She’s being chased by the twins. Scott’s beside Deucalion. They see a firefly. Deucalion says that perhaps animals can sense impending supernatural disasters, just as they can predict natural disasters.

Peter admits that he doesn’t know where the nematon is because Talia, Derek’s mother, took the memory of its location because of the danger it harbors.

Ms. Morrell finds a spot in the woods. She throws a circle of mountain ash around her, creating a sphere of safety. However, Kali and the twins surround her. And now she’s trapped.

Deucalion approaches Ms. Morrell. He says, “How did you know that we’d come for you.” She says that’s what you’ve always done: come for people like me. She spills information. She says that she’s been assisting people outside the Alpha pack because she’s always been trying to maintain balance — with nature, etc., the role of the druid. Ms. Morrell tells Scott, “This isn’t you. Go back to your friends.” Deucalion throws his walking stick at Ms. Morrell. It pierces her shoulder. She falls out of the circle of mountain ash. Scott runs over to her. He asks for any info she might have. “The nematon. Find the nematon and you’ll find Jennifer.”

Meanwhile, Chris, Stilinski, and Melissa are talking in the nematon. Sheriff Stilinski thinks he’s always known that something otherworldly has been going on this town, as he had an unnatural encounter as his wife, Claudia, died.

The team tries to find the location of the nematon. Dr. Deaton says there might be a way to find it, but it’s dangerous. He says, “We’re going to need Scott.”

Scott meets Stilinski and Dr. Deaton. Dr. Deaton tells them that they will act as surrogate sacrifices — in place of their parents. Dr. Deaton says he can bring them back but that there will be consequences: There will be a darkness surrounding them. Also, he says that by doing this it will fill the nematon back with power. It will then serve as a beacon for all manner of supernatural beings.

The children of the parents about to be sacrificed prepare for the ritual. They each have a special, meaningful item. Dr. Deaton prepares the ice baths. They will be submerged. Dr. Deaton says someone meaningful will have to have the strength to keep them submerged, but also pull them back. Lydia goes beside Stiles. Isaac goes beside Allison. Dr. Deaton assists Scott.

Stiles says to Scott, “By the way, if I don’t make it. Your dad’s in town.” Scott’s dad is the FBI agent we met at the beginning.

Derek watches over Cora. He prepares to bring her back from the brink of death.

Allison, Stiles, and Scott are pushed into the ice baths. They go under. They’re held under.

The episode ends: To be continued.  But before it does, Scott’s eyes open and glow a fierce yellow.