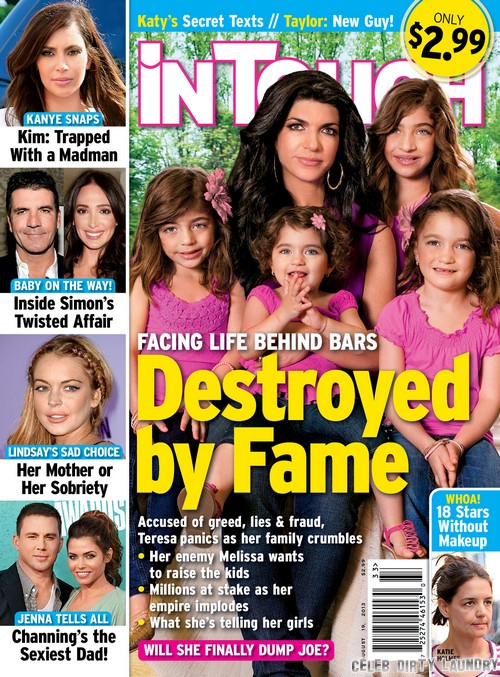 I guess someone needs to attempt to earn an honest living in the Giudice family and so Teresa Giudice will be the one to try and carry on, business as usual while facing that nifty 39-count indictment. On August 14th Teresa and her shady husband, Joe Giudice are expected to plead not guilty at their formal arraignment and that evening Teresa will be all decked out for a book signing!

According to the Aug. 19th print edition of In Touch, Teresa’s close (maybe only) friend, Kim DePaola, says that Teresa will indeed follow through on her already scheduled book signing to be help at Kim’s upscale boutique, Posche. Rather than cancel the event, Teresa has decided to be strong and not let her fans down and Kim totally has her back. I have to wonder how many fans will show up to have their cookbooks signed. These events usually take place in Jersey and by now I’m think Teresa has likely exhausted her supply of fans, don’t you think?

Will the press instead be all over Kim’s boutique looking for a first hand quote from Tre, fresh out of court? She is expected to still stand in solidarity on Aug. 14th but how long do you think that will ask? Teresa supposedly believes that she can get out of this mess without jail time but those close to the case say that the feds will not strike a deal that doesn’t include jail time and that if Teresa can get away with an offer of only serving a year or two she should run with it. Will she ever take that type of deal or will she ride this out to the end and inevitably end up doing much longer than two years? Tell us your thoughts in the comments below!