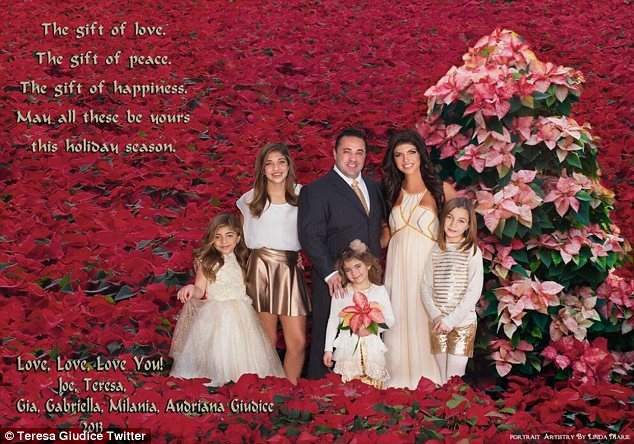 Tis the season to downsize and oh boy it isn’t a good look for Teresa Giudice and her family.  The Real Housewives of New Jersey star released her season greetings card and all anyone can say was – did she have it done at the mall? The family looks cute in  their best attire but the cheesy fake roses of a background feels like it was done by some poor sap earning less than minimum wage. She probably would have looked much better simply going the at home adobe photoshop route.

To say Teresa and husband Joe Giudice have money problems would be a vast understatement. Even if they’ve hidden money around the house; they wouldn’t be able to use it. Currently their out on bail stemming from financial fraud charges. The only way they can claim they weren’t living outside of their means is by claiming to be flat out broke. Otherwise having a spare thousand around simply makes Joe’s actions look like greed. Excuse me “look” and “like”  were the wrong words. No, Joe’s actions were based on greed.

The Giudices wanted a crazy expensive lifestyle – they did to keep up with their “friends” and look how well that worked out. One of the “friends” probably talked her into sharing this Christmas card on Twitter. I suspect long time enemy Melissa Gorga was behind it. After all she’s family as well so she probably spoke to Teresa saying “No one will be able to tell.” Lie!

And yes maybe Melissa does get blame for a lot of things she hasn’t done, but did I also mention how Melissa released her own Christmas card this year? Melissa’s family session won’t be winning any prizes in photography and yet her picture is better than Teresa’s. With both of them out; who could help themselves for not doing a side by side comparison.