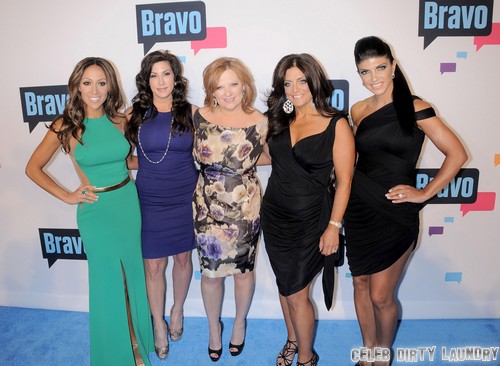 We are three episodes into the new season of Real Housewives of New Jersey and we still have not seen any interaction between Teresa Giudice and Jacqueline Laurita. In season four the women went through what Teresa called a Friends Divorce. It doesn’t look like reconciliation will happen anytime soon.

Teresa mentioned in her blog this week the reasons the reasons she is no long friends with Jacqueline. She writes “Last season when she brought up fake tabloid stories about me on camera and pretended to be worried that they were true, that was too much for me.” The other reason Teresa said their friendship is over is because Jacqueline fingered her in strippergate. Teresa says Jacqueline told her brother Joe Gorga that his sister set up his wife. Teresa writes “He texted me that Jacqueline told him I set it up and that I was ‘dead to him’ and to never speak to him again. It’s the single reason why we stopped talking for good. Jacqueline knew I didn’t set Melissa up. She knows who did. For her to use that lie to break up my family for good was too much for me.”

Teresa has a point. Her family had their problems but for Jacqueline to go straight to Joe is just wrong. Joe hearing about his sister’s involvement in the scandal was the straw that broke the camels back for him. If Jacqueline didn’t maliciously interfere in an issue that was none of her business maybe Teresa and Joe’s relationship would have had a chance to heal. Joe said he refused to go to his Goddaughter’s birthday party.

He was sick with pneumonia but he also wasn’t ready to see his sister. In the same episode Jacqueline said Teresa asked her friends to interfere and then told them to mind their own business. In this instance, Teresa didn’t ask Jacqueline to do anything. Jacqueline wanted to hurt Teresa and she knew what she was doing when she talked to Joe. Teresa was vindicated during the season four reunion when Kim D said she was the one who set Melissa up. Jacqueline still wasn’t moved and kept throwing darts at Teresa.

Although these former BFFs are no more they still have a soft spot for each other. Jacqueline wrote on her Facebook wall on June 17 “I felt bad that T&Joe weren’t able to communicate w/out a mediator.I’ve been there w/my daughter.Now we r better than ever! #Hope.

Jacqueline also tweeted support for Teresa regarding her father being hospitalized in the ICU. She wrote, “It’s a horrible feeling when your parent is not well. I understand Teresa’s pain.” Teresa said some nice things about Jacqueline, too. In her blog from the season five premiere she said “I give Jacqueline a lot of credit for sharing Nicholas’ story. Dealing with his disorder and dealing with it publicly takes a lot of courage. Nicholas holds a special place in my heart because he was born three months before Audriana.”

Hopefully Teresa and Joe can rebuild their relationship. It would be awful if they stayed estranged because they are keeping their children apart and hurting their parents.