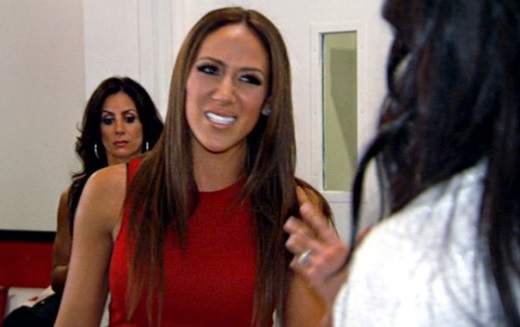 On the June 30th episode of Real Housewives of New Jersey, Season 5, Episode 5, we see more of the same family drama that has occurred since this season’s premiere episode. Most of the cast say they want to move forward but there is so much hurt and anger no one can move forward. The cast members that are family are expressing mixed emotions of love and hate. It’s still Teresa against the world. In this episode, however, we see a slight change in the tide.

Joe Gorga comes home from the gym after running into his sister, Teresa Giudice, in a very bad mood. He vents to his wife, Melissa Gorga, about the explosive fight he just had with Teresa. Joe mentions as an example Teresa accused Melissa of a mean tweet. Melissa admits it’s true. She wanted to give Teresa a taste of her own medicine. Now Joe is furious with his wife. He says no matter what that’s his sister, and he will school Melissa if she does it again. It was good to finally there something positive come from Joe regarding his sister. Teresa has never mean tweeted Melissa. When she writes her Bravo blogs Teresa states the facts but does not name call.

The Manzos again are just taking up space. I will say Caroline finally did something smart. She gets a call from Teresa and is informed of the confrontation at the gym. Caroline says she feels she should step out now. She should not have injected herself in someone else’s family drama in the first place.

The Lauritas are also just making an appearance on the show. Jacqueline is frustrated because her son has stopped progressing in his autism treatment. That’s all there is this week.

In this episode we see a little more of Teresa’s cousin Rosie Pierri. She, too, wants a crack and talking sense into Teresa. Rosie wants to talk to Teresa on Joe’s behalf. The cousins have a good conversation but then get into a screaming match as usual. But this time after they get it all out they just listen to each other and talk. This conversation was good for Rosie and Teresa’s relationship but it ended up having nothing to do with Teresa and Joe mending fences.

I’m really tired of third parties offering to speak to Teresa on Joe’s behalf. Joe gives his consent for these people to interfere but he is making matters worse. Joe feels he can’t get through to Teresa. I think he isn’t trying to get through to her. Joe doesn’t really listen to what is going on with Teresa. He blew off Teresa’s comment about Melissa mean tweeting her because he blindly loves Melissa. Well, he got schooled tonight. Score another point for team Teresa!!

The Wakiles are boring and annoying as usual. Kathy has finally had enough of Rich making decisions for her dessert business. They are partners in Kathy’s business but at the same time Kathy wants more of a say in things like the color and design of the boxes. Kathy has a point. She says to Rich she is new at running a business and needs to learn, not have Rich do everything for her.

Next week Teresa talks to everyone about going away on retreat. Every time this group goes away together it doesn’t end well. Melissa said before the new season started there is a happy ending this time. I’m hoping we start to see the beginning of the end of the feuding between this extremely close family and their extended family the Lauritas and the Manzos. The thing is everyone keeps saying Teresa has to admit she was wrong and apologize. No one has come forward to apologize to her. They are just as culpable when it comes to this fighting.