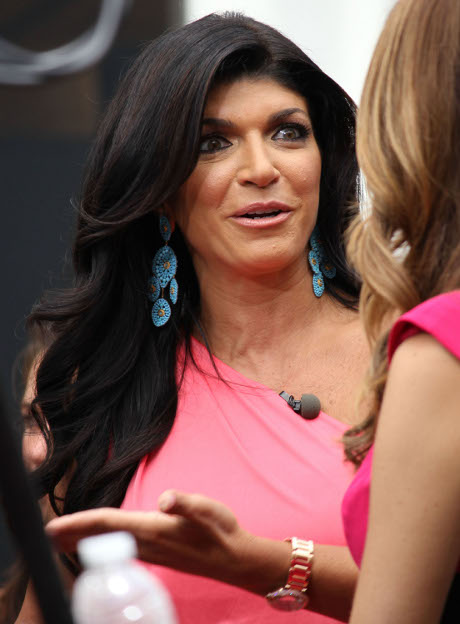 There’s no drama in the celeb world quite like Real Housewives of New Jersey drama! Teresa Giudice‘s husband, Joe Giudice, has definitely made a name for himself (not necessarily a good one) while being featured alongside his wife on RHONJ and his image continues to grow shadier. He allegedly cheated on his wife with Nicole Cemelli, and after his alleged mistress caught wind of a potential story outing her affair with “Juicy Joe,” she fell into a panic attack. Turns out she got so worked up (and terrified) that she picked up her little telephone to call Teresa herself!

Apparently, “Nicole was flipping out. She’s really upset and worried,” a source told Life & Style Magazine (via Radar Online). Another source close to the situation said, “She was hysterical. Nicole comes from a very good family and does not want this out there.”

Sources say that Teresa never believed that Joe would cheat on her and that she feels extremely sorry for the poor girl who was caught in the middle of this horrible tabloid crossfire. HOWEVER, other people are claiming that Teresa simply doesn’t want to admit to the fact that there are large cracks in their marriage — despite the very outright letter she left on her blog:

“It’s not acceptable to falsely portray our friends, family, business associates, fans, and even acquaintances this way,” the 41-year-old reality star wrote. “The poor girl in your photo is freaking out now — and rightfully so — because she’s getting harassing calls at her work, being stalked on the Internet and even followed.”

Sources told Life and Style that she “doesn’t want to acknowledge the cracks in her marriage.” Seems as if she’s trying to protect her children? Time and time again, she’s said she wouldn’t stay with a cheater, but now she has her pride to think about.  If Teresa decides to end it, she’s going to have to confront the fact that they (her children) may never forgive her.”

What do you think about this situation? Do you think the confrontation will continue to heat up RHONJ style, for better or worse? Do you think Joe is a cheating scumbag?