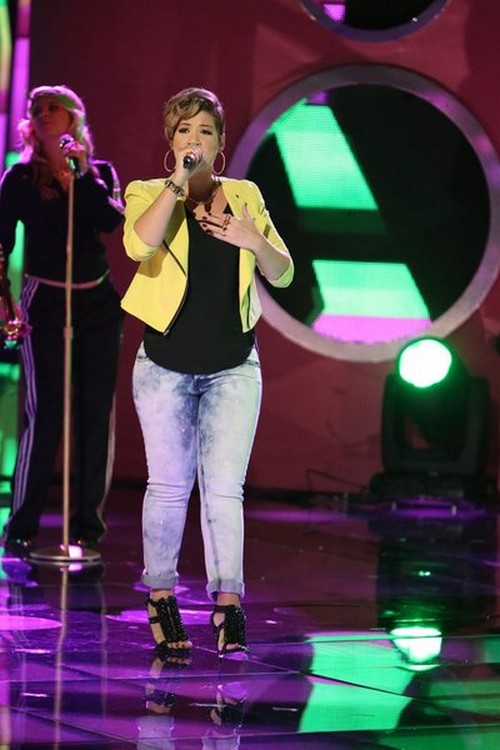 Tessanne Chin took the stage tonight on THE VOICE for her Top 6 video performance.  Tessanne Chin sang “Unconditionally” by Katy Perry.  Tonight’s show the remaining artists from each coach, Christina Aguilera, Adam Levine, CeeLo Green and Blake Shelton team performed live for America’s vote and the chance to move on to the Semi-Finals.

Judges Comments: “Adam says that he believes Katy Perry songs have a lot of ground to cover; but he was not concerned about Tessanne singing it. He believes that she has such strong range doing this song and one by Bob Marley; he feels she could do any genre and be successful. Blake is glad for once he can talk; he believes that she is a world class vocalist and every time she never fails to amaze him.”  Did you see Tessanne’s other song she sang tonight Redemption Song” by Bob Marley?  If you missed it, we have it right here for you.

On last week’s show Tessanne sang “Underneath it All” and the judges loved her performance.  The judges said this about her performance,  “Adam says that it’s such and amazing moment; because there aren’t many songs that have such spice and flavor. Adam believed that this song basically is Tessanne and loved how soulful she is when singing. CeeLo says that it was awesome; it was impeccable and he has been to Jamacin. He believes she is the immense beauty that’s born from that place. Christina thanks her for listening and hearing her Jamacin accent in the song; it really made her feel like she could understand her much better.”