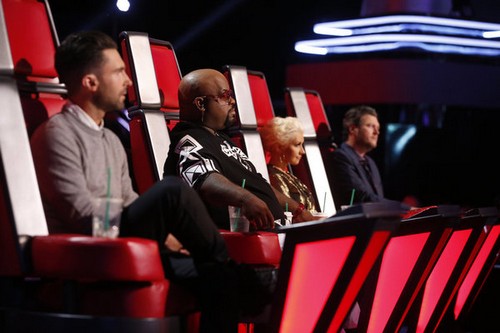 THE VOICE is one of our favorite singing reality competitions because the judges – definitely have a good time and are even quite funny. Tonight, The Voice season 5 will be returning with a new episode called, “The Top 6 Live Performances.”  On tonight’s show the remaining six artists give do-or-die performances and America votes for who’s headed to the semifinals.  In case you missed the last week’s show we have the full and detailed recap right here for you.

On last week’s show It was another nerve-wracking night at Stage 12. Jacquie Lee, James Wolpert, Matthew Schuler, Will Champlin, Tessanne Chin, Ray Boudreaux, Cole Vosbury and Caroline Pennell paced nervously backstage as Carson set the scene for the night.  At the end of the show Caroline Pennell from Team Cee Lo and Ray Boudreaux from Team Blake reached the end of the line and were sent home.

Tonight’s  The Voice “Live Top 6 Live Performances”  is going to be an exciting one, which you won’t want to miss. So be sure to tune in for our live coverage of NBC’s The Voice – tonight at 8 PM EST!   While you wait for our recap, hit the comments and let us know how excited you are about the new season of The Voice.

RECAP: The number one song chosen for Cole Vosbury to sing by Blake is “Rich Girl”; Blake bring Cole a brand new guitar and Cole talks about how his first one was from his dad. Blake wants Cole to have fun and wants to shows off how great a vocalist he is; Cole is the last man standing on team Blake and wants to represent him in the finale.

Blake says that he doesn’t even know why he worries about Cole; he’s such a pro and that he makes it clear that he works hard as a singer. Blake believes they could record his live performance and could sell it with no problem; he loves the fact week after week he stands there and sings his best every week and respects him a lot. CeeLo says that he did a great job and loves the song he sang; it’s a pleasure to still see him here today, he thinks he’s a great talent. Adam says that he loves Cole’s voice; it’s always a pleasure hearing him sing.

Next up is Tessanne Chin and she is singing a song by Bob Marley called “Redemption Song”; Adam believes it’s a song that is basically her countries national anthem. Tessanne was so excited to get this song and it’s really important to her people; she wants to get it right.

Adam says that there is a list he could recite about how much he loves that song; he feels like that it’s hard to do that song and he believes that she carried the flag of the song so proud. Christina says that she loves the Jamaican accent and loves her so much; it really brought back so many memories and it made her just lost in the song.

Next up is Matthew Schuler singing “The Story Of My Life” by One Direction; it’s dedicated for his whole family and how much he loves them for supporting him throughout his entire life with his dreams.

Christina says that she loved Matthew’s song choice and that he always has a way of making a song his own; when the choir came out with him he made such a special place and thinks the stage suits him so well. Adam says he isn’t familiar with the song but is now; every time he goes on stage he always impresses him and loves how he always does different things.

Next up is Will Champlin singing “Change Is Gonna Come” by Sam Cook; he dedicates the song to his wife and daughter. They have went through a lot of hard times and loves them dearly for sticking with him.

Adam says that he loves how well Will can play the piano like a bad ass; he loves how he sings an all time classic in his own way with such grit in his voice. Adam thinks the way he dedicates the song to his family is beautiful; he loves his optimism in his heart. CeeLo says that Will has soul and heart; the way he made him say damn with how great his vocals were at the end.

Next up is James Wolpert singing “I Fell In Love With A Girl”; his dad has been behind him through a lot of the choices he’s made in his life; he appreciates his love and support throughout his entire life.

Adam says he kind of slipped in the middle of the song but he felt like it was still really good; he loved bringing a simplicity to the song that really gave a nice slow feeling compared to the original. Blake says he sings with such a great voice and didn’t really realize a mess up in the song; he thought his pitch was really good.

Next up is Jaquie Lee, Christina gave her the song “Cry Baby” because she wants her to show how vulnerable she is. Jaquie has never really gone through love before so it’s hard for her to portray this song but she feels like she needs to nail it; she wants to stay next week.

Christina says that gets up from her chair and goes up to Jaquie; she shows her how the mic stand is on the floor and that she left her heart and soul on the floor. Christina says she sees so much of herself in her and loves how her courage is much strong now. CeeLo says it’s truly amazing; it’s like some sort of vessel where the spirit flies through. She gave such a powerful and real performance; he is completely amazed. Adam says the day her heart gets broken she will release such an amazing song.

Next up is Cole Vosbury singing “Better Man” to his first love; even though it didn’t work out and they aren’t together anymore, she made him want to become a better man.

Blake says that if he doesn’t get him back after that song there is something wrong; he loved how he did this song because of how he shows dimension and that he could do everything. He can sing so well and show off so much character; he respect Cole so much. CeeLo says that he agrees with Blake; it’s bitter sweet for him but still amazed to see how much he has grown. He’s also amazed with how he stops wearing his hat and is comfortable with himself now; he feels that he is so proud and would love for him to win this. Christina says that the only thing that was a little different and that he has been so consistent and has to watch out for getting a little too raspy.

Next up is Tessanne Chin who dedicates the song “Unconditionally” by Katy Perry to her parents; even though they are not together anymore they still have showed her how important love is and loves them both very much.

Adam says that he believes Katy Perry songs have a lot of ground to cover; but he was not concerned about Tessanne singing it. He believes that she has such strong range doing this song and one by Bob Marley; he feels she could do any genre and be successful. Blake is glad for once he can talk; he believes that she is a world class vocalist and every time she never fails to amaze him.

Next up is Matthew Schuler, Christina choose the song “When A Man Loves A Woman” because Matthew has not had a truly soulful moment; Matthew says he’s never done a song like this and is a little nervous about doing such a different vibe tonight. Matthew put his last performance behind him last week and doesn’t want to see the bottom three again.

Christina says that it takes a great artist to embody so many genres of music and he’s one of the best on the show to do that; she loves how he went from One Direction to such a blues feeling. Blake says that the show is just doing amazing with the classic; he believes that Matthew did a great job.

Next up is Will Champlin with his second performance; Adam believes that Will is a heart worker and such a diverse singer. He gave him the song “Hey Brother” to show off that he can do many different other styles; Adam even had him play the banjo on this song.

Adam says that he loves that song; it’s so weird because of how it brings so many genres in one and Will figured it out perfectly. Adam believes he is a powerful vocalist and nailed all the vocals; he wants to hear more from him. Blake is impressed by the song choice and loved the banjo a lot; he thinks they are so cool.

Next up is Jaquie Lee and she is dedicating this next song “The Voice Within” by Christina Aguleira to her coach; she says the song really made her want to become a vocalist.

Christina says that the song really took her back and was so glad to have her sing that; she finds that they both share so many similar aspects as not only performers but as people as well. She is amazed seeing her dig so much deeper ever weaker; she truly appreciates what she did with the song.

Next up is James Wolpert with the song Adam chose for him and that song is “I’d Do Anything For Love” by Meatloaf; James is happy with this song selection and having done theatre in school he is very excited.

Adam says that ever since they decided on this song he has been singing it; James is actually sick and is proud of him having come up on stage even though he has kind of lost his voice but still did an amazing job.