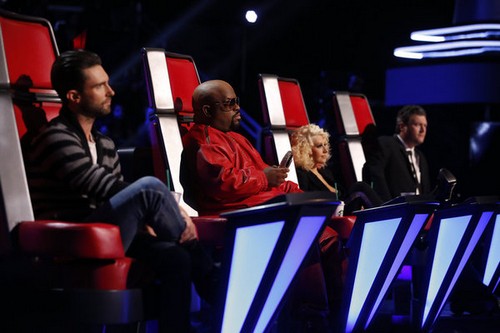 THE VOICE is one of our favorite singing reality competitions because the judges – definitely have a good time and are even quite funny. Tonight, The Voice season 5 will be returning with a new episode called, “The Top 8 Live Performances.”  On tonight’s show a full night of The Voice starts at 8/7c as we learn more about the Top 8 and see them perform live for your votes.  In case you missed the last week’s show we have the full and detailed recap right here for you.

Tonight’s  The Voice “Live Top 8 Live Performances”  is going to be an exciting one, which you won’t want to miss. So be sure to tune in for our live coverage of NBC’s The Voice – tonight at 8 PM EST!   While you wait for our recap, hit the comments and let us know how excited you are about the new season of The Voice.

RECAP: Kicking off the show is Robin Thicke with his brand new single “Feel Good”.

First up for tonight is James Wolpert performing a Queen classic; Adam’s team is doing well and are all celebrating the fact that they all stayed this week. Adam is amazed at what he does and how he can sing almost anything; James chose to sing “Sombody To Love” by Queen. Adam feels like he is going to blow their minds and Queen is one of his favorite bands; James really wants to knock it out of the park.

Adam says that Queen in general is one of the tallest orders for a male vocalist; Adam believes that James could sing in Queen. It was an unbelievably impressive performance; it was dynamic and beautiful. Blake says that it was incredible; it was dynamic and dramatic. It was a solid performance and one of his best performances so far. Christina says he should feel very proud; he used a lot of the stage and kind have had a feeling she was watching a Broadway show. CeeLo says he`s a big fan of Queen but he did such a wonderful job, his timing was great; one of the greatest performances on the history of The Voice.

Next up is Tessanne Chin; Adam believes she has the best moment to strike right now. Adam bought all of his members a picture of them on stage performing again; Tessanne is going to sing “Underneath It All” wanting to introduce a Jamacin song to the show. Tessanne’s mom stay up at 4am to just see her on TV and Tessanne wants to impress her; she is happy with her song choice because she likes staying true to her culture.

Adam says that it’s such and amazing moment; because there aren’t many songs that have such spice and flavor. Adam believed that this song basically is Tessanne and loved how soulful she is when singing. CeeLo says that it was awesome; it was impeccable and he has been to Jamacin. He believes she is the immense beauty that’s born from that place. Christina thanks her for listening and hearing her Jamacin accent in the song; it really made her feel like she could understand her much better.

Next up is Caroline Pennell and CeeLo is glad that she was voted back into the competition; Caroline felt discouraged with being in the bottom three but she hopes she can find the moment for herself this week. Caroline is singing “Dark Days Are Over”, CeeLo thinks the alternitave sound is something that would be different yet very appealing; CeeLo believes she can do anything.

CeeLo says that is very happy and proud of Caroline; he appreciates and respects how well she performed that song. CeeLo says that she is the only thing that matters to him at this moment and wants her to succeed; if she wins nothing else then she at least wins his heart. Adam says that it was a very important thing; he liked seeing her step outside of the box a little bit.

Next up is Tessanne Chin, Will Champlin, Ray Boudreau and Cole Vosbury singing “One Day”.

Next up is Cole Vosbury; Cole was brought to the Tonight Show and watched Blake live on the show as a guest. Cole was really glad to get to met Jay Leno; Cole is singing “I Still Believe in You” by Vince Gill”. Cole loves country music and his grandmother was a country artist; it’s very important to him. Blake doesn’t want him to be distracted so he lets him take the guitar and do it acoustic.

Blake says that Cole’s heart is just laying there on stage when he performs; the emotions from Cole really showed his character so well and that there is no one out there who can sing like him. Christina says she loves how invested he is with his emotions in the song; she really does love it a lot. She felt like it gave them a quiet moment to reflect; it was a very special moment.

Next up is Matthew Schuler, Christina tells him happy birthday and gave him the song “It’s Time”. Matthew says this song is exactly how he feels right now and is excited to sing it; Christina brings in her choreographer and is showing him how to be a stronger performer on stage.

Christina says that she loves from Matthew is how he sings with how he really feels and it connects really well; she loved how the song spoke the truth of how he felt. CeeLo says that the song is something he really believes in and that Matthew should keep being himself.

Next up is Caroline, Matthew, James and Jaquie singing “Lego House” by Ed Sheeran.

Next up is Will Champlin, Adam is really impressed and surprised by how hard Will works; he’s a real artist. Will is singing “At Last”, Adam wants him to take this risk by doing a song that nobody would ever expect; Adam tells him that emotion is more important then technique in the song.

Adam says that he is laughing because it doesn’t matter how high a note is or how challenging a song is; Will is always trying to push himself to his limits to do better. Will is singing at least eight notes higher than he did in rehearsal; it’s just amazing. Christina says that her spirit lives in that song; it’s one of her all-time favorites. Christina says that Will did a great job, she loved how he sang with all his heart and could talk for hours on how great it was.

Next up is Ray Boudreaux and Blake allowed him to go meet Jay Leno alongside with him; Jay says that show business is much like high school with money, it’s something quite straightforward. Blake gave Ray “Give Me Some Loving” to sing this week; he really wants him to live up to what he did last week.

Blake says that Ray has some style and it was like Robert Palmer up there; it was incredibly awesome and entertaining. Blake loved how Ray went for such big notes; it was a amazing. Christina says that she loved the whole thing and that it was a great performance. CeeLo says he’s going to call him Sugar Ray; he loved the energy and it’s a song that he loves. He thinks Ray did an amazing job with the song.

Christina says she loves Jaquie so much and the soul in her voice just really makes her so happy to hear her; she loved seeing her getting up there and singing her heart out.

Adam says that he always wondered how she can portray all this heart break so well; it’s amazing to see how she can do this with such powerful vocals. Blake says that it was full of energy and dynamics; he has no idea who she was singing to but they probably fell in love with her.