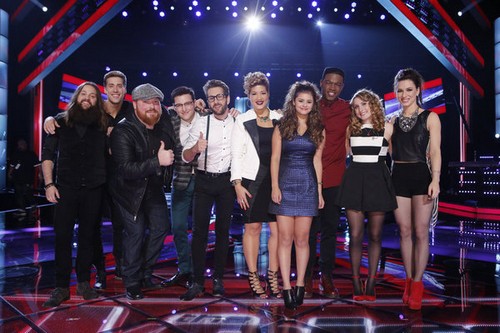 THE VOICE is one of our favorite singing reality competitions because the judges – definitely have a good time and are even quite funny. Tonight, The Voice season 5 will be returning with a new episode called, “The Top 10 Live Performances.”  On tonight’s show a full night of The Voice starts at 8/7c as we learn more about the Top 10 and see them perform live for your votes.  In case you missed the last week’s show we have the full and detailed recap right here for you.

On last week’s show the remaining artists discovered who would move on to the Top 10.  For the guest performance Sara Bareilles took the stage and performed new hit, “Brave.”  By the end of the evening.  On last week’s show eliminated was Jonny Grey and rocker Josh Logan.

Tonight’s  The Voice “Live Top 10 Live Performances”  is going to be an exciting one, which you won’t want to miss. So be sure to tune in for our live coverage of NBC’s The Voice – tonight at 8 PM EST!   While you wait for our recap, hit the comments and let us know how excited you are about the new season of The Voice.

To start of the show we get a performance from the top 10 artists with the song “Just Say it, Just Say It” by The Mowgli’s.

First up is Austin Jenckes who was saved by America; Blake wants him to shock people. Blake believes he could make this song his own and is making him sing “Your Love” by the Outfield; Blake wants Austin to prove to America that he has some real pipes. Austin is having a lot of trouble with the song and feels pressured; but is prepared to give it his all because this is something he wants to do with his life.

Blake believed that was his break out performance; since day one they were trying to master this range in his voice and loved how he was so good. Christina was surprised with how hard he rocked that song and was impressed. Adam felt it was really great and loved how amazing his range was; the sound of his voice and his high tones was really good. CeeLo says that he is a fan of his and didn’t realize he had that much range; it looked so effortless and he is just amazed. [VIDEO HERE]

Next up is Jacquie Lee and was she saved by America; Christina wants to dig deeper into her personality and introduced her to her friend Krista and they both did yoga together. Jacquie feels the yoga gave her more control of her breath; Jacquie is singing “Clarity” by Zedd; Christina believes Jacquie needs to make a deeper connection with the audience to nail this song.

Christina says that she is so lovely and loved seeing her in that setting; she believes the vulnerable feel was very touching. CeeLo says that she is one of the best they have but some moments in the early bits of the song was a little unnerving; but it was still awesome. Blake says that he agrees with CeeLo and wants to see Jacquie do some stronger songs. Adam says that she is very young, but what she did was very beautiful and commends her on it. [VIDEO HERE]

Next up is Will Champlin from team Adam who was saved by America; Adam is incredibly proud of Will. Will feels like he knows where he’d like to be as an artist now with the help from Adam; he’s been given the song “Love Me Again” by John Newman. Will is excited about this song and loves how upbeat it is; it’s challenging but Adam is pushing him really hard to nail this song.

Adam says that Will has been passed around between coaches a lot but he truly believes that he belongs here; the performance felt really good because Will was so comfortable with the song. Christina says she loves Will and felt that he has the full package; she felt the song really felt like it was his own. Blake says he is such an accurate vocalist; he rolls of the notes so well and is believes he is great. [VIDEO HERE]

Next up is Caroline Pennell who America saved first; CeeLo believes she has what it takes to win the competition. Caroline’s mother says that she really appreciates all that CeeLo has done for her daughter; Caroline is glad to be coached by him. Caroline is singing “Leaving On a Jet Plane” by John Denver; it’s one of her favorite songs and wanted to sit it because it means so much for her.

CeeLo says that it was so nice; she really puts a smile on his face with her performances and he supports her so much. He is pleased about letting her choose her own song and losing herself to it; he really believes that she is consistent with her quality but felt the song at one point kind of felt like it might overpower her. Adam says that this was really great for him because he got to see her make a statement; he liked seeing her stay true to herself and felt that she is good at song choices. [VIDEO HERE]

Next up is Cole Vosbury; Blake feels Cole is the most creative person on the show. Cole is doing one of his favorite songs in the world; he is so happy Blake gave it to him. Cole is really glad to be with Blake because he’s guiding him so well in his music; he really doesn’t want to leave. Cole is singing “To Be With You” by Mr. Big.

Blake is so happy and can’t see how somebody would not like Cole; he really feels like the girls are on board for the Cole train. He loved how it was so acoustic and personal; he really nailed it. Adam says that Cole could have done the song in any way and hasn’t heard that song in so long; Adam has his heart broken knowing Cole isn’t on his team. CeeLo says he’s so proud of how far he’s come and supports him so much; he loves how open Cole is and how comfortable he is singing. [VIDEO HERE]

Next up is Tessanne Chin; Adam believes the next song for her is very crucial and wants her to connect with the audience much more. Adam gave Tessanne the song “If I were Your Woman” by Gladys Knight and The Pips; Adam believes it is perfect for her. Tessanne is having a little trouble with the song but trying hard to do it perfectly.

Adam says that song is something nobody has done on the show before and really felt that it was solidifying her presence on the show as a contender and is so proud of her. Christina says that she heard her Jamaican accent a bit in the song and loves it so much; Christina enjoyed her so much and would love to hear more moments like this where she shows off her dimensions in her voice. [VIDEO HERE]

Next up is Ray Boudreaux; he is singing “You Are The Best Thing” by Ray LaMontagne. Blake wants Ray to give off the feeling that he’s giving off a concert; he believes the song is perfect for Ray. Ray feels like it’s a song that he can relate to and Blake believes it’s what makes him sing the song better.

Blake says that he can’t hear a thing with the crowd going crazy; he believed it was an awesome performance. Last week Ray rattled the cage of who he was but feels like he now showed off who he truly is and the chorus was just perfect. Christina says she loved the performance but was thinking that out everyone here Ray has shown the most growth; at first she couldn’t tell who he was but now she feels that Ray has found an identity that suits him well. CeeLo says that he agrees with Christina; he loves Ray’s soulful singing and believes it was a great job. Adam says he always like Ray and feels he has been very solid; but wanted to see a bit more at time and bust out. [VIDEO HERE]

Next up is James Wolpert and Adam believes he keeps surprising him more and more ever week; James appreciates how Adam believes in him so much. Adam gave James a classic song “Without You” by Harry Nilsson. James feels pressured because he wants to do the song justice; but believes in Adam’s teachings.

Adam says that song is one of the hardest ones to sing and a favorite of his; he believes that James took the song and makes it his own. He has such an individualistic way with how he performs; he would buy the album. Christina loves the look and the song choice; the whole thing really impressed her and his voice is so clean. Blake says vote for James! [VIDEO HERE]

Next up is Kat Robichaud and she was saved by America’s tweets; CeeLo says that she has nine lives and wants to allow her to be the artist she is. Kat is singing “We Belong” by Pat Benatar; Kat loves the song and how it shows off a more vulnerable song to herself. CeeLo wants the song to be on epic proportions; he wants this performance to embody Kat’s style of performing.

CeeLo says that he is so proud of Kat, he loved seeing what all of her hard work had become; it was so amazing to see how she was true to herself on stage. He believes the performance was done so well; it will live forever that performance. Adam says it was incredible but in the past she seemed to struggle and felt it was the perfect song for Kat; it was literally what everyone has been wanting to see from Kat the whole time.

Last to perform tonight is Matthew Schuler singing “Beneath Your Beautiful” by Labrinth. Christina believes Matthew can do everything and had him to yoga with her like she did with Jacquie Lee. Christina believes that it’s the first time people will see this romantic side of Matthew; Matthew says it’s interesting to sing this and is obviously on the lookout for the perfect girl.

Christina says that they all love him and that he should take in how every time he finishes a performance the crowd goes so wild; he makes everyone go crazy. She believes that he is amazing and proved it once again that he can do everything; she doesn’t even need to write notes about him because there’s nothing bad to say. Adam says that he’s a great singer and is so sad that Matthew is not on his team; he nothing but amazing. [VIDEO HERE]