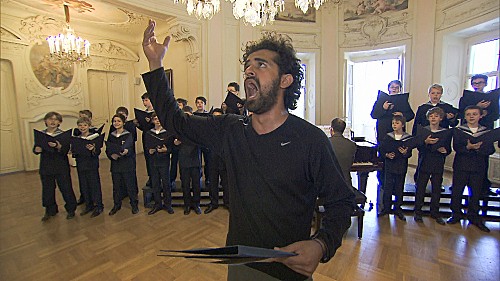 Tonight on CBC their Emmy award winning show THE AMAZING RACE continues with a new episode.  On tonight’s episode called “Choir Boy at Heart”  an intense dispute breaks out at the mat.  Did you watch last week’s episode 6?  If you want to know what happened, we have a full and detailed recap, right here for you.

On last week’s show teams traveled to Gdansk, Poland where racers struggled to keep up the beat during a polka challenge. Meanwhile, a double U-turn jeopardized each team’s chances in the Race.

On tonight’s show one team is tempted by the Fast Forward but will their choice pay off? Meanwhile, Racers struggle to stay in tune with the world famous Vienna Boys Choir and an intense dispute breaks out at the mat.

RECAP: Seven teams remain, Tim & Marie are the first team to leave and have to travel 640 miles by train to Vienna, Austria where they need to find the Vienna Opera House, once there, they have to find the costume director to get their next clue. All teams are on the first train except for Leo & Jamal and Ally & Ashley who are on the second. But once in Poland, all teams catch up with each other. Leo & Jamal lie to all the teams that they didn’t U-Turn Brandon & Adam, they don’t want the other teams to know.

All the teams run into the opera house and run up many flights of stairs to the costume room and get their next clue. It is a Detour and teams have to choose between “Masquerade” and “Light Brigade”. In masquerade, the teams have wear elaborate masks and play close attention to couples who are dancing to find the one that is wearing the same mask as them. In light brigade, teams have to dress up and put together an elaborate chandelier, if they don’t get it on the first try the chandelier will come crashing down. There is also a Fast Forward, but it is a successful bungee jump 500 feet that will get them to move forward. Jason & Amy are the first team to arrive at the Fast Forward and it is too windy to bungee jump and are told to wait it out for fifteen minutes. Amy wants to wait it out, while Jason thinks they should go back and complete one of the Detours.

Nicole & Travis, Tim & Marie are at the masquerade. Tim & Marie are the first team to complete the Detour and move on. Nicky & Kim have also just completed the detour, with Leo & Jamal just behind them.

Jason & Amy are still arguing about bungee jumping, she finally gives in and leaves with him to the opera house. Tim & Danny have finished at the masquerade, while Nicole & Travis have also finally finished. Jason & Amy finally arrive at the masquerade and are upset they are obviously in last place since everyone is gone.

Next up is a Roadblock, one team member will have join the choir and sing die forelle. When the choir master believes that they have put on a great performance, he will hand over the next clue. Ally has a hard time, while Jamal looks like he is having an easier time of it. Nicky thinks she is doing good because her dad speaks German. Travis is excited because he plays a lot of instruments and loves to sing. Meanwhile, Jason & Amy are done and excited to catch up with everyone else. Tim is having hard time and just keeps going over and over it. Amy is practicing as well now, Jason is so happy that it is back to an even playing field.

Travis is ready to give it a go, he sings and the children of the choir smile and giggle, the headmaster tells him to go practice again. Jamal gives it a go and pretty much gets the same reaction that Travis got. Ally is the same while Tim is not even making away from his instructor.

Tim gives it a go, the same results as everyone else, back to the drawing board. Nobody seems to be able to get this right, it is really tough.

Finally, Nicole & Travis are done and get there next clue, they need to head to Schonbrun Palace, Nicky & Kim are next.

Leo & Jamal, Tim & Marie are the next two teams done and on to the next clue. Tim & Marie steal Jason & Amy’s taxi and plan to blame it on Leo & Jamal.

Nicole & Travis are the first team to arrive and they have to navigate a maze to find the clue box which will tell them to look for the Gloriette, the Pit Stop for this leg of the race.

Nicole & Travis are the first team to arrive, they have won a trip for two.  Nicky & Kim are team number two, Leo & Jamal team number three. Ally and Tim are still trying to sing the opera and having a hard time.

Jason & Amy meet up with their old cab driver and find our that Tim & Marie are the ones who took their cab. Both teams are at the Pit Stop and Jason makes a comments about someone being sneaky. Tim & Marie are team number four, Jason & Amy are team number five. An argument breaks out about the cab, Marie tells them that at the end of the day it’s a game. Jason in return says that he and Amy are going to kick their ass in this game.

Ally fails her third attempt at the opera, so does Tim. Ally & Ashley are finally done, while Tim is upset that he and Danny are in last place. Finally Tim is done and the two are on their way. It is going to be a foot race between the two last teams, Danny & Tim are hoping the girls have trouble finding the next clue so they can catch up. Ally & Ashley are team number six at the Pit Stop, it is a huge relief for them. Danny & Tim are the last team to arrive, they have been eliminated from the race.