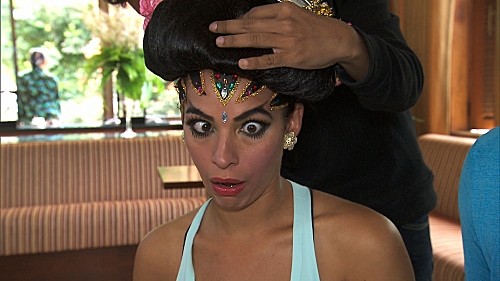 Tonight on CBC their Emmy award winning show THE AMAZING RACE continues with a new episode.  On tonight’s episode called “Cobra In My Teeth” the race continues in Bandung, Indonesia where they have to eat snake.  Did you watch last week’s episode 9?  If you want to know what happened, we have a full and detailed recap, right here for you.

On last week’s show mistakes abound as the pressure of the Race gets to the final five teams in Bandung, Indonesia, and one team’s relationship turns icy when they struggle at a Detour.  At the end of the show Ally & Ashley were the last team to arrive at the Pit Stop and they were eliminated from the race.

On tonight’s show the final four teams are in Indonesia where they must stomach a serving of snake, and Racers reach their boiling point during a challenging Road Block.

RECAP: It is now the start of the 10th leg in Indonesia; Leo & Jamal are the first to depart and have to head to King Cobra House to eat some cobra which is a delicacy in this part of the world. Nicole & Travis are hoping to catch up in this leg since Nicole set them back when she had trouble with one of the tasks in the last leg. All the teams arrive at the King Cobra House and Tim & Marie are lost.

Leo & Jamal are the first to leave and now have to head to Kawah Domas Lembang while Tim & Marie are still Lost. Other teams are finishing quickly and following behind Leo & Jamal.

It’s now a RoadBlock, teams must choose who is going to head out on the back of a small motorcycle with a local to an old volcano and boil a dozen eggs in some boiling water found in a spring.

Teams are talking about the fact that Tim & Marie are MIA.

Tim & Marie finally arrive at the King Cobra House and Marie is having hard time getting the cobra down. Meanwhile the other teams say that they cannot see Marie having being able to eat it; they are right.

All teams hurry to finish boiling their eggs and find out that they are not hard boiled; they head back to the hot spring and come up with a plan to tells Tim & Marie that it only takes 8 minutes so they will have to do it twice as well.

Leo & Jamal have fallen behind, they are in third place but are now heading to a Detour where they have to choose from  “Paint Your Partner” or “Turn Over a New Leaf”, while Tim & Marie are boiling eggs.

In paint your partner, teams have to put makeup on each other. In turn over a new leaf they have to find shears in a field of tea leaves. Tim is hoping the Marie accidentally overcooks the eggs so they are hard boiled.

Leo & Jamal are the only team so far to choose to head to the tea fields where they have to dress in traditional garb and walk through the fields to find the shears. Marie finishes her hard boiled eggs and unbelievably on the first try; they are now heading to the Detour and decide to paint each others faces as well. Leo & Jamal are getting to the point that they are going to give up and head over to the other Detour because they can’t find the shears.

At the paint your partner, Leo & Jamal quickly find out that they will have to shave their mustaches and beards which causes them to quickly head back to the tea fields.

Jason & Amy are finished painting each others faces and head to the Pit Stop at the waterfall, they are the first team to arrive a win a trip for two to Cancun, Mexico. Tim & Marie are the second team to finish the painting and are headed to the Pit Stop. Leo & Jamal are still in the tea fields while Nicole & Travis are having a hard time with the makeup; but finish and are heading to the Pit Stop as well. Leo & Jamal have finally found the shears, their mistake was that they were looking at the ground versus looking in the bushes.