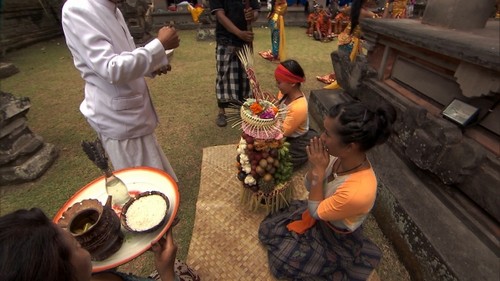 Emmy Award winning THE AMAZING RACE returns to CBS tonight with a new episode called, “I Love Monkeys!” On tonight’s show in Detour B, Best friends Pam and Winnie must assemble an elaborate religious offering known as a “Gebogan” then take it to the Pura Desa Puseh Temple for a blessing in order to receive the next clue.   Did you watch last week’s premiere episode? We did and we recapped it here for you.

On last week’s show the Amazing Race headed to New Zealand. Feathers, fun and fast cars proved too much for one team? There’s only one rule in this race; never, ever give up.  Meanwhile, David’s debilitating leg abrasion threatened to cut short his adventure with his son Connor.  No one was eliminated last week.  Dave & Connor arrived at the Pit Stop, they were team number one and they won a trip to Bankok with a Thai boxing lesson. Phil told them the race was still going, he had their next clue.  Dave was still thinking he should drop out.  Part 2 continues tonight.

On tonight’s show the race continues in Bali, Indonesia and the stress of the Race brings one Racer to tears and another Team makes history while trying to avoid elimination.

Tonight’s The Amazing Race Season 22 episode 4 is going to be exciting, and you won’t want to miss. So be sure to tune in for our live coverage of The Amazing Race — tonight at 8 PM EST! While you wait for our recap, hit the comments and let us know how excited you are that The Amazing Race is back? Also, check out the sneak peek of tonight’s episode below!

RECAP: Teams are now heading to their next destination, Bali. Dave’s leg has gotten progressively worse and he and Connor are the in first place. All other teams are following them and heading to the airport. Chuck & Wynona were the last team and are very lucky that the leg is still on. Some teams are smart and book their flights before they get to the airport, but Joey & Mehgan, Jessica & John, Bates & Anthony didn’t do that and end up having to finding a travel agency. In the end, all teams make their way there, but they are on three different flights. Dave & Connor are still in first place, although three other teams were on their flight and they all have landed in Bali. Pam & Winnie were on that first flight as well and their first stop is a park filled with monkeys were they have to place a coconut on the ground and encourage a monkey to open it for them.

Dave & Connor are the first team to get their next clue and it’s a Detour, they have to choose either “Sandy Bottom” or “Fruity Top”. In Sandy Bottom they have to transport sand from the river to a brick maker. In Fruity Top they have to make a fruit offering and have it blessed by a priest.

Bates & Anthony get a cab driver that doesn’t know where he is going and it appears they may just have been pushed into last place.

Pam & Winnie have finished the Fruity Top, so have Dave & Connor and are bringing them to the priest to bless. Teams must now head to Uluwatu Surf Beach and search for their next clue. Max & Katie and Caroline & Jennifer also just finished their Fruity Top. Bates & Anthony finally arrive at the monkeys and they are definately in last place.

Jessica & John are starting their Fruity Top along with Joey & Mehgan.  Mona & Beth are the only team to have chosen the Sandy Bottom and they are finding the weight of the sand to be tough to carry on their head.

At the beach, there is a Roadblock. They have to find a specific surf board and bring it to the Pit Stop. Winnie is the first person on the Roadblock searching for the surfboard with Connor not that far behind her.

Bates & Anthony are catching up because Jessica & John are not doing well with the Fruity Top. Wynona & Jake are done their Fruity Top with Joey & Mehgan right behind them. Jessica & John have left the Fruity Bottom and heading over to the Sandy Bottom just as Mona & Beth finish.

Jessica & John just finished the Sandy Bottom, while Mona & Beth arrive and they are team number six. Chuck & Wynona arrive with the wrong board, Bates & Anthony are team number seven. Chuck & Wynona are team number eight. Jessica & John finally arrive at the Pit Stop with the right board, they are the last team to arrive and are eliminated with an Express Pass that was never used – dumb. John goes down as one of the dumbest players in Amazing Race history, he should have listened to Jessica when she said to use the Express Pass after they left Fruity Bottom.