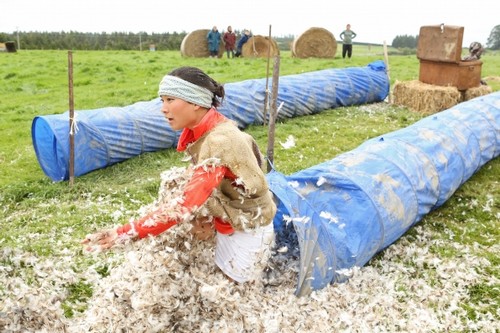 Emmy Award winning THE AMAZING RACE returns to CBS tonight with a new episode called, “Like James Bond Again.” On tonight’s show in a road Block, Winnie must participate in a Shemozzle Race which requires one team member to dress as a Kiwi sheperd and run through a wild obstacle course while collecting eggs. Did you watch last week’s premiere episode? We did and we recapped it here for you.

On last week’s show one team experiences extreme panic when faced with the seas of Bora Bora and another Team injures themselves sprinting to the mat.  The twins were the last team to arrive at the Pit stop and were eliminated from the race.

On tonight’s show the Amazing Race heads to New Zealand. Will feathers, fun and fast cars prove too much for one team? There’s only one rule in this race; never, ever give up.  Meanwhile, David’s debilitating leg abrasion threatens to cut short his adventure with his son Connor.  I wonder if that is going to put David in jeopardy this week?

Tonight’s The Amazing Race Season 22 episode 3 is going to be exciting, and you won’t want to miss. So be sure to tune in for our live coverage of The Amazing Race — tonight at 8 PM EST! While you wait for our recap, hit the comments and let us know how excited you are that The Amazing Race is back? Also, check out the sneak peek of tonight’s episode below!

RECAP: Bora Bora is the start of the third leg in the race around the world, Bates & Anthony were the first to arrive in the last leg, so they get to depart first and they are heading to New Zealand. Once they arrive, they have to drive themselves to the Rakaia River Gorge. Dave & Connor have a disadvantage this leg with the Dave’s injury, but they got an Express Pass give to them so they are safe for now, but Dave still has to see a medic when they arrive in New Zealand.  Dave gets fitted with a boot, he has also torn the tendon in his leg. Everyone is at the airport waiting to depart the next day on their connecting flight to New Zealand.

Teams have landed in New Zealand and must now make their way to Rakaia River Gorge.  Pam & Winnie are already hopeless lost. Caroline & Jennifer are all over the road, but they have an alliance with Bates & Anthony, so they are confident they will do well.

Dave & Connor are at the gorge, they are number one to get a ticket to a boat tour the next day; the rest of the teams follow suit. Chuck & Wynona are in last place.

The next day, Dave & Connor really want to win the leg and if they have to use the Express Pass, then they will. Teams get to drive a jet boat  Teams now face a Detour, “Rev It Up” requires teams to put the pedal to the medal in a modified vintage car where they have to complete a course in an allotted time. In “Reel It In”, teams have to catch at least one fish that is twelve inches long.

Most of the teams choose to “Rev It Up” but Dave & Connor can’t because Dave can’t use a clutch with his foot. Connor wants to use the Express Pass, but Dave doesn’t want to, he wants to try the other Detour.

Dave & Connor are not getting any action, so the use the Express Pass and get to head to Mt. Hutt Station for their next clue. Meanwhile, the other teams are not having that easy of time of it either, but Jessica & John are the first team to finish the Detour.

Bates & Anthony are in 5th place, there are still teams trying to finish the Detour. Chuck & Wynona headed over to catch some fish.

Road Block; teams have to race through a muddy terrain in gum boots covered in molasses and feathers to collect eggs though an obstacle course, they need to collect twelve of them unbroken. Connor is the first person to go through the Road Block.

Katie is getting Max lost and he is upset because they are losing time.

Teams must now drive themselves to Terrace Downs, the Pit Stop for this leg of the race and Dave & Connor are the in first place right now, heading to the Pit stop. John is the next one to tackle the obstacle course. Chuck is also on the course and he thinks it is fun. More teams arrive and there are lots of people on the obstacle course now. Max & Katie finally arrive at the Detour and she can’t help tell him she told him so as they already passed this area before.

Dave & Connor finally arrive at the Pit Stop, they are team number one and they win a trip to Bankok with a Thai boxing lesson. Phil tells them the race is still going, he has their next clue.  Dave is still thinking he should drop out.

Stay tuned next week for part 2.