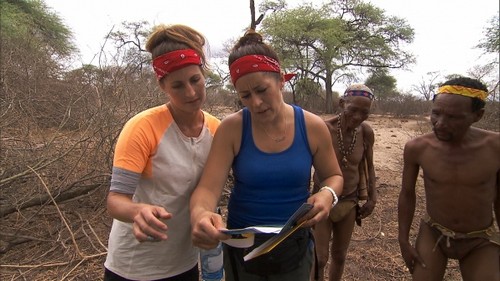 Emmy Award winning THE AMAZING RACE returns to CBS tonight with a new episode called, “Scorpion King Hunter.”  On tonight’s show in Detour B, Roller Derby moms Mona and Beth must construct and set a snare to catch a guinea fowl in order to receive the next clue.   Did you watch last week’s premiere episode? We did and we recapped it here for you.

On last week’s show the game gets personal as Teams face a Double U-Turn in Hanoi, Vietnam, and one Team faces crushing news.  One team will quit and double U-turn could send two teams home.  At the end of the show Chuck & Wynona were the last team to arrive, but since Dave & Connor had already left the race, they were officially team number seven and that meant they were still in the race.

On tonight’s show the teams are leaving Vietnam and heading to Africa where they participate in a safari and one of the brilliant racers comments, “this is where The Lion King was made!”  I guess he forgot the Lion King was a cartoon.  Racers take on the daunting challenge of hunting for scorpions in Africa and Chuck and Wynona confront Team YouTube for using the U-Turn against them.

RECAP: Teams are now heading to Botswana, Africa. Pam & Winnie is the first team to head to the airport.The rest of the teams are leaving, one after the other and there are three all female teams still in the race. Chuck & Wynona are having a hard time at the travel agency, they take some time figuring out their destination – they also find out that they were U-Turned by Joey & Meghan. At the airport, all teams are caught up with each other but there are three flights. Mona & Beth, Pam & Winnie, Chuck & Wynona are on the last plane.

Teams now have to drive down a marked road to find their next clue. Roadblock “Who Wants To Make A New Friend”. Teams have to go dig up a scorpion, a bushman’s best friend.

Bates is shocked when the bushman wants him to dig in whole for the scorpion, but he does it. Max follows a bushman and he’s in it just like Bates, Caroline is digging her way in.

Bates is first to locate his scorpion and now has to head down the road with three bushman, while Caroline is second and is surprised when her bushman puts the scorpion in his mouth. Joey is terrified of bugs and is so nervous about the whole ordeal but he manages to get through it.

Max was all in it, until his bushman put the scorpion in his mouth and he looked like he was going to faint. Bates & Anthony are in first place, they are have their next clue, it’s a Detour. Teams must now choose “Fire” or “Fowl” where they will learn some hunting and gathering skills from the local bushman. In “Fire” teams have to learn how to make fire with two sticks and light the elder bushman’s pipe to get their next clue. In “Fowl” teams have to set a trap over eggs, that has to ensnare it.

Most teams choose “Fire”, while Pam and Wynona are the last two to find their scorpion.

Caroline & Jennifer find building the fire is really, really tough. Pam & Winnie are the only team to choose “Fowl” and they call it “Sesame Street on crack”. Mona & Beth think they have chosen the wrong Detour, they are having trouble making fire.

Chuck & Wynona finally catch up and they decide to also do “Fowl”. Joey & Meghan ditch the “Fire” and head over to “Fowl”. Pam & Winnie are done, they are heading to the Pit Stop.

Max & Katie are having a hard time with the snare while Caroline & Jennifer have arrive in fifth place. Mona & Beth are done with the Detour, but they run in the wrong direction, luckily they arrive at the Pit Stop and are team number sixth. Max & Katie are the last team to arrive, but there is good news, this is a non-elimination race.

Max & Katie will encounter a Speed Bump in the next leg that they will have to complete.