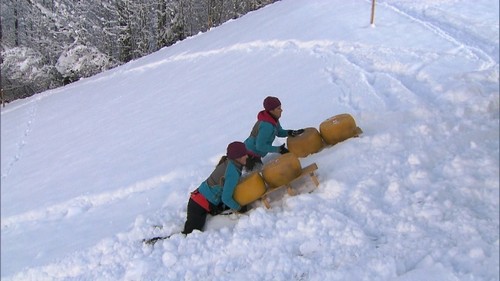 Emmy Award winning THE AMAZING RACE returns to CBS tonight with a new episode called, “My Cheese is Out of Control.” On tonight’s show in an Active Route Marker, Roller Derby moms Beth and Mona must transport 200 pounds of cheese using a Swiss mountain sled.  Did you watch the last episode? We did and we recapped it here for you.

On the last episode the remaining teams continued on the seventh leg of the race.  When racing around the world, you’ve got to be quick, persistent, and fast. Never expect to run into a speed trap. Plus, Sunday night, you’re going to see something they have never asked teams to do before; water ski with crocodiles.

On tonight’s show on the eighth leg of the race teams race through Switzerland where they grapple with giant wheels of cheese in a return to a classic Race challenge “Switchback,” and Racers are on the edge when they dangle thousands of feet in the air traversing the north face of Eiger mountain.

RECAP: Six teams remain, who will be eliminated next? The Royal Tree Lodge in Africa is the start of the eighth leg of the race. Bates & Anthony were the first team to arrive in the last leg, so they are leaving first and teams are now heading to Zurich, Switzerland. It seems like there is no rush, because all teams are on the same flight, it is back to square one for the teams.

Teams must find a conductor in a red hat who gives them their next clue, head to Grindelwald and wait for the alpine shepherd who will deliver their next clue. Some teams have arrived, but the shepherd is not arriving till 8:55am, so even teams that have fallen a bit behind are all back at the same starting place again.

Teams now have to travel by train to the base of the mountain and the conditions are slippery as their was fresh snow overnight. Chuck & Wynona are arguing, he is constantly disappointed with her no matter how fast she goes and it is wearing her thin

Teams must now travel with a rescue dog by train but it is no easy task for Caroline & Jennifer when their dog does not want to get in the train. Luckily Anthony came to their rescue and lifted the dog up. Teams have to deliver the dogs to the top of the mountain to a rescue team to receive their next clue.

Teams deliver their dogs then head up on the elevator to get their next clue, it is a Roadblock, “Who Wants To Enjoy The Sights”. This Roadblock requires the teams to climb out of an upper observation window and travel across a mountain 6,000 feet up to to retrieve a gnome that has their next clue.

Bates is the first person out, it is straight down and terrifying. Katie is out, she is looking down and she is not scared. Chuck tells Wynona that if things go wrong, he won’t re-marry for the first month. Beth is doing ok, but she has never done anything like this in her life and just chooses not to look down. Jennifer is on her way out and she is eager to get the task done. Wynona is having trouble, she can’t get to it.

Teams must again travel by train to find their next clue. Bates & Anthony are first but they have to wait for the train and other teams could catch up. The train is leaving and Chuck & Wynona, Mehgan and Joey are not on the train.

Teams must now follow the marked path to join the local work force. Teams have to grab a sled, run up a hill, that is really like a mountain to get to the cheese. There is a rope to hold on to because the hill is so steep. Bates & Anthony are way ahead of everyone else. The cold is not the problem, teams are having a hard time because it is so slippery. Katie is in front of a big group and she is holding everyone back. Bates & Anthony have their to blocks of 50 pound cheese and are on their way down the hill. Caroline & Jennifer are having a hard time, they are dropping their cheese every five seconds.  Joey & Mehgan have finally arrived, with Chuck & Wynona just behind them.

The final two teams are in the taxi on the way to the Pit Stop, Churck & Wynona arrive in fifth place, however Wynona had to use proper methods to transport the cheese, she rolled it down the hill. There is 30 minute penalty, it is anyone’s game now. Joey & Mehgan have arrived at the Pit Stop, they are the last team to arrive and she is crying. Jeff tells them that because Chuck & Wynona have incurred a penalty, they are still in the race and are team number five. Chuck & Wynona are officially the last team to arrive and are eliminated from the race.