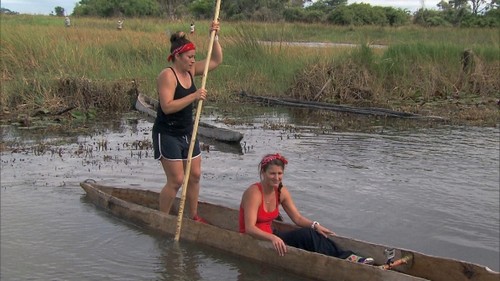 Emmy Award winning THE AMAZING RACE returns to CBS tonight with a new episode called, “Be Safe and Don’t Hit A Cow.”  On tonight’s show during the Road Block, Roller Derby moms Beth and Mona must propel a Mokoro, a traditional canoe, down the Thamalakane River to a near by village where they will exchange two goats for the next clue.  Did you watch last week’s premiere episode? We did and we recapped it here for you.

On last week’s show the teams leave Vietnam and headed to Africa where they participated in a safari and one of the brilliant racers commented, “this is where The Lion King was made!”  I guess he forgot the Lion King was a cartoon.  Racers took on the daunting challenge of hunting for scorpions in Africa and Chuck and Wynona confronted Team YouTube for using the U-Turn against them.  By the end of the show Max & Katie were the last team to arrive, but there was good news, it was a non-elimination race.  Max & Katie will encounter a Speed Bump tonight that they will have to complete.

On tonight’s show the remaining teams continue on the seventh leg of the race.  When racing around the world, you’ve got to be quick, persistent, and fast. Never expect to run into a speed trap. Plus, Sunday night, you’re going to see something we’ve never asked our teams to do before; water ski with crocodiles.

RECAP: Caroline & Jennifer are relying on their faith to get them through the race so far, they realize they could have been gone the first week. Teams are scrambling to get to their cars and head to Maun. Caroline & Jennifer get stopped by a police officer and they try to talk themselves out of a ticket for speeding. Mona & Beth soon pass them, they don’t get stopped. The ticket price is 820 pula, or 120 dollars American. Meanwhile, Max & Katie have trouble finding their vehicle which only pushes them further in their last place position.

Joey & Meghan feel like they are getting stronger on every leg, but directions are still a problem for them. Bates & Anthony are the first team to arrive at the Road Block but decide to take the Fast Forward where they have to stay on water skis for one mile where there are signs to beware of the crocodiles. The water is murky, all the boys can think about is the crocodiles. Both boys are up on the skis and as long as they don’t move, they will make it.

Pam & Winnie arrive at the Road Block “Who wants to go up a creek without a paddle” where they have to transport two goats in a small canoe type of boat across the river.

The boys make it one mile on the water skis, they can’t believe they have done it and both don’t know if they are excited or relieved. The two are now headed to the next Pit Stop at Royal Tree Lodge.

Chuck & Wynona arrive next at the Road Block and Wynona is as nervous as hell when she has to go get the two goats. Mona & Beth arrive next while Caroline & Jennifer have to exchange money because the police station does not accept American dollars.

Max & Katie are the next team to get stopped for a speeding ticket. Caroline & Jennifer got their money converted and paid their speeding ticket. Pam & Winnie deliver their goats while Chuck & Wynona are having a hard time navigating their boat. Mona & Beth are stuck in weeds and the two start arguing out of frustration. Meanwhile, Joey & Meghan are still lost and Joey is hoping the other teams are having just as much of a hard time.

Caroline & Jennifer finally arrive at the Road Block. Wynona finally delivers the goats, she and Chuck are headed back. Once the Road Block is completed, teams must head by water taxis to the Royal Tree Lodge Game Reserve to retrieve their next clue.

Max & Katie are at the police station, waiting in line to pay their ticket. Bates & Anthony have arrived at the Pit Stop, they are team number one again and they have one $7,500 each for a total of $15,000, three first place finishes in seven legs of the race.

Chuck & Wynona are enjoying the ride in the water taxi, just behind Pam & Winnie. Max & Katie have finally paid their ticket, but now they have banged up their vehicle when Max backs into a pole.

Joey & Meghan have also arrived and started the Road Block, they have the goats in their boat and are on their way down the river. Chuck & Wynona, Mona & Beth, Caroline & Jennifer and Pam & Winnie have all arrived at the Detour where teams have to choose between “Brains” or “Braun”. In Brains they have to find animal cutouts that they have mesmerized and in Braun they have stack wood in a cart and convince donkeys that are lured by a carrot to haul the load.

Joey & Meghan are having a hard time with the boat while Max & Katie finish their Speed Bump quickly and head on over to the goats.

Mona & Beth are team number two at the Pit Stop with Caroline & Jennifer team number three shortly behind them. Chuck & Wynona are still trying to mesmerize their animals, they now have to put animal tiles in the correct order in which they say the cut outs, they do it and are team number four to arrive at the Pit Stop. Pam & Winnie fail at the Detour and have to head back to look and mesmerize the animal cutouts again, although they both think it is a minor error and they will be done soon.

Pam & Winnie head over to the “Braun” challenge, they complete it and are the last team to arrive at the Pit Stop, they are eliminated from the race.