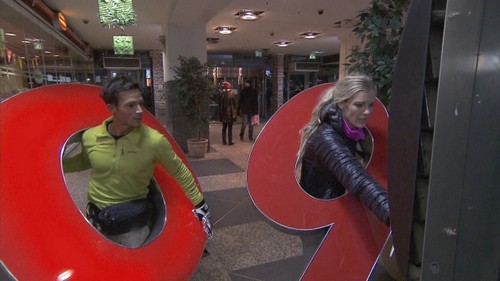 Emmy Award winning THE AMAZING RACE returns to CBS tonight with a new episode called, “The Ultimate Fun House.” On tonight’s show in Detour B, Newlyweds Max and Katie must deliver illuminated billboard letters on foot in order to receive the next clue. Did you watch the last episode? We did and we recapped it here for you.

On the last episode on the eighth leg of the race teams race through Switzerland where they grapple with giant wheels of cheese in a return to a classic Race challenge “Switchback,” and Racers were on the edge when they dangled thousands of feet in the air traversing the north face of Eiger mountain.  Jeff told Joey & Mehgan who arrived at the Pit Stop last that because Chuck & Wynona have incurred a penalty, they were still in the race and team number five. Chuck & Wynona were officially the last team to arrive and are eliminated from the race.

On tonight’s show the race heads to Berlin, Germany where contestants experience the ultimate free fall and the ultimate underground rave.  The final five teams are in Germany, where they plunge 37 stories through the Berlin sky and take a twisted journey through a psychedelic labyrinth.

RECAP: Bates & Anthony had their third first place win in the last leg while Chuck & Wynona made a critical error that sent them home. Switzerland’s gentle slopes is the start of the ninth leg in this race around the world. Bates & Anthony is the first team to depart and they are now heading to Dresden, Germany. On the train, Bates put his bag down and fell asleep and when he woke up, the bag is gone – but he has his passport.

In Germany, teams all race to find a taxi to the Ministry of Finance. Teams must answer three questions about their next destination, they are race inspired questions from their My Ford touch screen. Max & Katie are the first team to answer all the questions and now must drive 100 miles to Berlin, Germany and find the Brandenburg Gate where Ronald Reagan made his famous speech.

Teams must now head to a roof top to base fly to find their next clue. Caroline & Jennifer have lost Bates & Anthony and have no idea where they are going. All teams have arrived at the building, Max & Katie are the first to drop. Max says the base jump feels like he jumped off a building 37 stories high.

Time for a Detour, teams have to visit one of two museums. In Trains Trials, teams lay train tracks on a platform and when a model train completes the entire track, they will get their next clue. In Font Follies, choose letters at a market place and deliver the them in tact where they will find their next clue.

Caroline & Jennifer have caught up with Bates & Anthony and the four are headed to Font Follies. Meanwhile, Max & Katie have their letters O and b and are headed to deliver them. Mona & Beth have also headed to Font Follies. Joey & Meghan are the only team to head to Trains Trials, they find the Detour really fun. Max & Katie have finally found the museum and have to head up an escalator to deliver the letters. The next clue has the teams heading to Salon Zur Wilden Renate, a shady little place according to Max. It’s a Roadblock, first teams have to figure out which famous person made a certain quote “Ich bin ein Berliner!”, it is actually John F Kennedy. Then they have to go through a twisted labyrinth, pitch black and look for a white room that has a clue attached to the wall.

Caroline & Jennifer are looking for directions, Anthony puts his letter down and it breaks, he has to go back and get another one. Katie found the clue, she describes the labyrinth as her worst nightmare. The clue has the teams then heading to Kurfurstendam, the Pit Stop for this leg of the race.

Caroline & Jennifer have finally delivered their letters and cannot believe how isolated the museum was. Meanwhile, Bates & Anthony have headed to Train Trails, the other Detour.

Max & Katie are the first team to arrive at the Pit Stop, they have each won a 2013 Ford Fusion.  Joey & Meghan are at the labyrinth, Joey doesn’t have an answer for the question about the quote, but he asks some random people and gets the right answer. Joey cannot believe how scary the labyrinth is, he says it is the top task in the race history.

Bates & Anthony know that they need a prayer if they are going to be lucky enough to catch up and not be eliminated, they may just have it as Mona & Beth are lost and having a hard time finding their way. The girls stop and ask for directions, hopefully they work. At the labyrinth, Jennifer finally found the room and the clue.

Beth & Anthony start to work together in the labyrinth, they finally find the white room together. It’s a race to the Pit Stop, the guys are following the girls and they have arrived, both teams have to run and the boys get there first. Bates & Anthony are team number four, Mona & Beth are the last team to arrive. There is bad news for Bates & Anthony, they have to continue racing with Mona & Beth because it is a non-elimination race – Phil was just joking about the bad news.