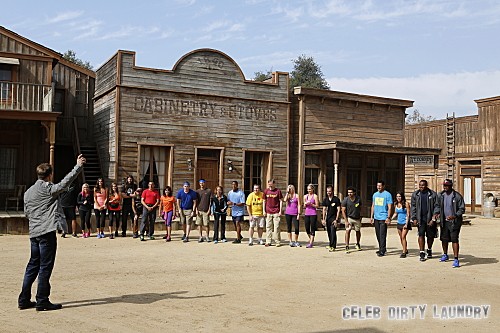 Emmy Award winning THE AMAZING RACE returns to CBS tonight with the season 23 premiere called, “We’re Not In Oklahoma No More.”  On tonight’s show Emmy winning host Phil Keoghan sends 11 teams, each comprised of two members, against each other on a trek around the world for approximately 25 days.  Did you watch last season’s finale?  If you want to know who won, we have a full and detailed recap, right here for you.

This season 11 new teams, each comprised of two members, will be pitted against each other on a trek around the world for approximately 25 days. At every destination, each team must compete in a series of challenges, some mental and some physical, and only when the tasks are completed will they learn of their next location. Teams who are the farthest behind will gradually be eliminated as the contest progresses, with the first team to arrive at the final destination winning THE AMAZING RACE.

On tonight’s show With the Double Express Pass on the line, teams depart for their first destination, Iquique, Chile, where one racer must face their fear of heights.

Tonight’s The Amazing Race Season 23 season premiere is going to be exciting, and you won’t want to miss. So be sure to tune in for our live coverage of The Amazing Race — tonight at 9 PM EST!  While you wait for our recap, hit the comments and let us know how excited you are that The Amazing Race is returning!

RECAP: The teams are in the old wild west and in a few minutes they are travelling to South America for a ride of their lives.  Whomever wins this leg, will win an Express Pass plus an additional one to give to another team before the fifth leg. The teams are ready and they are gone.

Teams are now heading to Iquique, Chile. Leo & Jamal are leading the pack, with the other teams quickly behind them. Tim & Danny are already lost and cannot find the airport. Leo & Jamal make a quick run through the airport doors, they are the first team there. Seven teams are on flight 1. Brandon & Adam are the first team on flight 2. The guys are already fighting for Ally & Ashley’s attention, calling them eye candy.

In Chile, the first flight has landed and teams are heading to Alto Hospico where they find a Roadblock. One team member is going to have to do some paragliding. Travis is the first one to take off, Chester is next. Nicole thinks she has an advantage in finding Travis on the ground because she can communicate with the taxi driver in Spanish. Tim & Marie are the last team to arrive, while Leo is strapped in and ready to take off, as well as Ally who is a little panicked. Rowan has also taken off and thinks it is fabulous.

Kim is having a panic attack, she is really scared and thinks she is going to throw up, while Leo took off and loves it. Kim is ready to take off and she is praying before take off. On the ground, Ashley steals a cab that Jamal ordered and he is upset about it.

Rowan and Shane are in first place, they now have to head to Muelle Prat to get their next clue. Other teams are all landing and meeting up with each other. Meanwhile, the final four teams have landed.

Another Roadblock, teams have to choose a rowboat and collect a total of five fish from three fishing boats. Travis is the first one in a rowboat and he is finding it physically exhausting. Nicole keeps cheering Travis on and he soon finds his five fish and is heading back.

Brandon & Adam are the first team out of the final four to arrive at the Roadblock to do some paragliding.

Jamal and Rowan are having a hard time rowing, soon other teams join them and a lot find it really hard. Leo & Jamal make a mistake, Jamal hand glided so he can’t row as well, he has to return and Leo needs to row.

Brandon is still rowing his boat and has finally gotten his five fish while Naina is having such a hard time and she realizes that she read the clue wrong, her father, Hoskote should have rowed the boat. Hoskote gets all the fish and they head to the Pit Stop, they are eliminated from the race.