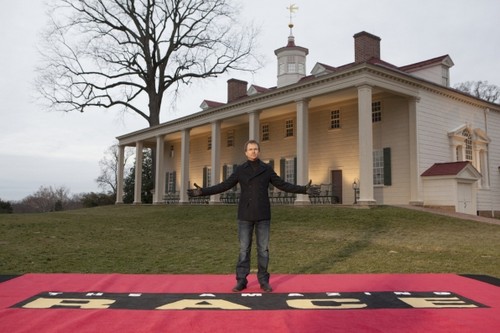 Emmy Award winning THE AMAZING RACE returns to CBS tonight with a new episode called, “Beacon of Hope.” On tonight’s show Emmy winning host Phil Keoghan greets the winners at the Pit Stop on the 22nd season finale of The Amazing Race. Did you watch the last episode? We did and we recapped it here for you.

On the last episode with a chance to compete in the finale on the line, the final five teams raced through Scotland, where they encountered a double U-turn that put two teams in jeopardy of elimination.  At the end of the show Mona & Beth headed to the Pit Stop with Joey & Meghan just behind them. Basically this was all going to come down to who got to the Pit Stop first.   Mona & Beth are were team number four to arrive at the Pit Stop. The last team to arrive was Joey & Meghan, they were eliminated from the race.

On tonight’s episode the 4 teams start with bog snorkeling in Belfast, where 1 team faces elimination. The final 3 then sprint to the finish line in Washington, D.C. in a Race through the capital for $1 million during the 2-hour season finale.

RECAP: Max & Katie are the first team to leave, they must head to Belfast, Ireland by ferry. Bates & Anthony are quickly behind them and are eager to lose Caroline & Jennifer, basically at this point it is all about winning the money. Mona & Beth are the last team but they are confident that the other teams feel threatened by them because they are still in the game despite the hard time they had last round.  All teams were on the same ferry and once they arrive it is a footrace to get to their cars. Caroline & Jennifer, Mona & Beth take the wrong way and are in third and forth place.

Teams are now at the RoadBlock where they have to go Bog Snorkeling. Teams have to race in a murky marsh and complete a route in under four minutes. The team members are dressed in a wet suit but the water is disgustingly muddy. Bates & Anthony are the first team done and now have to head back to Belfast and find the Thing With A Ring.

Jennifer is having a hard time in the bog, she is on her second try and giving up because she says she can’t breath. Meanwhile, the other teams have finished and are on their way to find the ring.

Max & Katie are the first to find the ring and the clue box. It’s a Detour, teams have to choose between “Tray It” where they have to descend into the dry dock where the Titanic was built and serve five courses of actual courses served on the Titanic, or “Spray It” which requires teams to finish one piece of graffiti art using a picture for reference.

Meanwhile, Jennifer is on her third attempt with Caroline trying to motivate her to finish the task, she does it.

Max & Katie are serving the courses and they have already completed two, Bates & Anthony have just arrived.

Bates & Anthony fail at the first course, so do Mona & Beth. Max & Katie have now complete their fourth course. Mona & Beth fail at a second attempt at first course, while Anthony drops the second course.

Caroline & Jennifer are lost, they ask for directions to the “ring” but are sent in the wrong direction. Meanwhile, Mona & Beth just can’t get it right and are wrong again. Bates & Anthony are now finished their fourth course.

Caroline & Jennifer have finally arrived at the Detour and decode to “Spray It”.  Max & Katie have finally finished the Detour. Bates & Anthony can’t get the fifth course done right and Bates is about to lose it.

Max & Katie are now heading to the Pit Stop at Ulster Hall, the first three teams that make it their first are going to be racing for the million dollars. Bates & Anthony are finally finished the Detour and also headed to the Pit Stop.

Max & Katie are the first team to arrive at the Pit Stop, Bates & Anthony number two. Max & Kate have won a trip for two to Dominican Republic with full butler service.

Mona & Beth are finally done, Caroling & Jennifer as well, it is going to be a race to the Pit Stop – anyone’s guess on who is going to get there first.

Time for the 12th and final leg of the race, Max & Katie are the first team to leave and head to London, England. After an eight hour ferry ride, teams are ready to go.  All teams are on track, they arrive at a pub and order two pints to get their next clue. Teams must now head to Washington, DC and figure out that they have to find the Lincoln Memorial where Martin Luther King Jr. made his famous speech.

Max & Katie are the first team to arrive and get their next clue. Teams have to head to 1100 Pennsylvania avenue to get their picture with the President. Max & Karie are again the team in first place and find out that it is actually not the real President that they are getting their photos taken with, but it’s still cool. Teams must now find a marked car at the Tidal Basin, knocked three times to get a brief case that has their next clue. It’s a RoadBlock, teams must play the spy master when they have to figure out which of fifty agents have the correct answer to their question on their clue. Bates & Anthony are the first team to finish the Detour, Max is still running around searching for his agent. Mona & Beth have just arrived and are searching for their agent.

Bates & Anthony are now at Nationals Park, while one team mate is suspended in the air, another is dressed in a baseball mascot costume and has to catch some balls dropped by the other team mate.

Mona & Beth, Max & Katie get their clue from their agent at the same time and are both headed to Nationals Park.

Bates & Anthony are done and now have to head to Hains Point, they have run from the back to the front but they are not getting cocky. At Hains Point, teams have to get inside a huge pool filled with balls and find those that are marked with the countries that they visited on the race. Bates & Anthony have a good head start, but Max & Katie are on their way there with Mona & Beth in third place.

Once the country balls are found, teams have to put them in the correct order of which ones they visited first.

Bates & Anthony are finished, they must now head to the first home of George Washington which is the Finish Line for the race, the winner will win it all.

Mona & Beth are finally at the pool filled with balls while Max & Katie have found their first ball.

Max & Katie have finally finished and are also headed to the Finish Line. Bates & Anthony are the first team to arrive at the Finish Line and are the winners of one million dollars. Max & Katie are the second team to arrive, with Mona & Beth coming in third. Katie is too funny, you can clearly see that she is pissed that they did not win, no doubt she is going to blame Max for how long it took him to find the agent. Mona & Beth are gracious and thrilled that they made it so far.