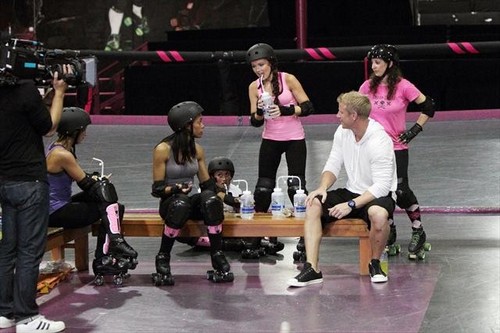 THE BACHELOR Sean Lowe returns to ABC tonight with a new episode. On tonight’s show tears and recriminations take center stage as the women tackle new challenges and clash head on to get closer to Sean.   Did you watch last week’s premiere? We did and we recapped it for you HERE.

On last week’s show a potential record-breaking date for the world’s longest on-screen kiss got Lesley M.’s heart all aflutter, while the claws come out at a very competitive volleyball group date that revealed some of the women’s true colors. Sean’s magical date with AshLee at an amusement park was shared with two girls who suffered from a chronic illness. The Bachelor had one more surprise for his date and the girls: a private concert by his favorite country group, Eli Young Band. However in the middle of this, one bachelorette took a nasty fall down the mansion stairs.  Sean stirred up a shocking finish to the night right before the rose ceremony.  At the rose ceremony Sean helds a rose out but he stops and took Kacie outside for a minute.  He told her that he respected her too much to make her stand through another rose ceremony.  He told her they were better off as friends, and he put her in a waiting limo.

On tonight’s show a challenging week is ahead for the 13 remaining bachelorettes as Selma learns that what she thought was an opulent date will actually be a rock climbing adventure. Eight women join Sean for a rock’em sock’em roller derby match, which ends with a trip to the hospital. Leslie H. is the stunning bachelorette that Sean surprises with a Rodeo Drive shopping spree a la “Pretty Woman,” and an elegant romantic date that ends with the couple being treated to a VIP private concert from folk-rock-pop artist Ben Taylor. But the controversy continues to swirl around one disruptive woman even as the others try to deepen their connection with Sean.  A tension-filled rose ceremony leaves 11 bachelorettes remaining to join Sean on a journey around the world to find love

Sean wants to focus on his individual relationships with each girl.  The first one on one is with Selma. She is super excited and ready to show him the real her.  Tierra is not pleased.

Sean says he’s had a connection with Selma since day one. She pretty nervous at this point and he reveals that they are taking a private plane to their destination.  Selma believes their date will be romantic and then they land. After the limo ride and private jet, they land in the desert. Selma is less than enthusiastic.

Sean reveals that he wanted to “take this glamorous girl out of her element.”  Selma admits that she does not do well in heat.  Sean tells her that there may be snakes, but they need a better view.  They are going to rock climb to the top.  Selma has a mini meltdown.

They start the climb and Selma is getting it done.  She says that Sean gave her courage and adrenaline and she climbs to the top. At times she seems to outdo him and he struggles to keep up.

Instead of ending the date in a fancy hotel, Sean takes Selma to a mini RV park. Each RV has its own theme.  Selma thinks it’s cute.

The pair starts to talk about their pasts.  Sean admits that after college his girlfriend started to hint at marriage after a year together.  He wasn’t ready.  Selma talks about her Muslim faith and the fact that she was born in Baghdad. She is fearful that her strict culture will be a negative factor in his decision.

Sean tries to kiss her, but Selma tells him that she can’t kiss him but she wants to. She can’t disgrace her family on national television.

He is okay with that and he offers her a rose.

Time for the group date and its roller derby time!  Amanda tells everyone that she’s a member of the rink that they are at, but only to get in the other team’s head.

Sarah is upset that her missing arm is hindering her roller derby skills. Sean tells her not to worry about it and all that matters is that she tries.  Meanwhile, Amanda is still doing great when she wipes out and slams chin first to the ground. The girls call the ambulance.

A paramedic assesses Amanda’s injury and tells her that she may have a broken jaw.  She is taken to the hospital.

After the incident, Sean decides that they will just have a roller skating disco date.  The girls love it and have so much fun.    Afterwards they get dressed and head off to the Roosevelt for a nice dinner and drinks.   Sean pulls Sarah aside to tell her how proud he is of her for overcoming her obstacle.

During Sean and Sarah’s short one on one time Tierra and the girls sit and wait in an almost awkward silence.  It’s clear that the girls do not like Tierra.  She calls them out on it for singling her out.

Back at the house we find out that Leslie H. is going on the next one on one date with Sean.

Tierra is complaining to the girls that she is done and tells a producer that she wants to leave.  She starts to look for Sean who is on a short one on one with another girl.  She is waiting for him in a dark corner and she lets him know that she is done with everything. She is tired of the girls being mean to her.  Sean tells her that he’s been through that and not to worry about things.  He excuses himself and walks to the small table in front of the other girls and takes the lone rose.  The girls are horrified because they realize that he is going to give it to Tierra.

Sean gets back to Tierra and takes her into the darker part of the corner and offers her the rose.  He believes she has so much self-doubt, but he wants to assure her that he is interested and he doesn’t want to wonder “what if” if she leaves early.   The other girls are pissed.

The next day is Leslie H.’s one on one date with Sean.  She is excited because she was given diamond earrings for the occasion.  Sean shows up in an Aston Martin and takes her shopping on Rodeo Drive.  Sean picks out a dress for her at Badgley Mischka and a diamond necklace from Neil Lane.  He also lets her get shoes and a purse to complete her ensemble.  Now it’s time for the real date.

The date takes place at the Bradbury.  Sean says this is the most romantic date he could think of.  This is the date that will decide whether or not they have any chemistry.  Sean wants to know as much about her as possible.  She tells him that she doesn’t want to settle and that when she gets married it’s only going to be one time.  As the date progresses Sean admits that the spark isn’t there.  He’s not sure what it is about her, because she’s a great person, but something is just missing.  He tells her that he’s sorry, but he can’t give her the rose.  He can’t let her settle.

The next evening the girls are pretty happy that another girl is gone.  Tierra takes Robin and Jackie aside to apologize to them.  She’s upset that they are worried about what she is doing instead of focusing on their own strategy.  She is tired of the “high school” pettiness.  The girls appreciate the apology, but don’t seem to really accept it.

Sean and Tierra get some one on one time.  He realizes that she needs tons of reassurance and tells her to be confident in the two of them.  She agrees to keep her eye on the prize.  The other girls continue their cattiness but agree not to say anything to Sean about what a bad person Tierra is.