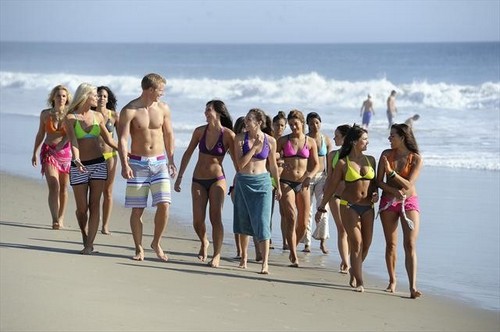 THE BACHELOR Sean Lowe returns to ABC tonight with a new episode. On tonight’s show a scorching kiss, a bad tumble down a flight of stairs and a heartfelt date marks Sean’s continuing journey to find love, even as he drops a bombshell.  Did you watch last week’s premiere? We did and we recapped it for you HERE.

On last week’s show the 19 remaining bachelorettes moved into the mansion with hopes that they would end up as Sean’s soul mate and future wife. But first our Bachelor had a few tricks up his sleeve, as he took Sarah on a jolting one-on-one adrenaline date, while Desiree got the full hidden-camera prank treatment to see if she had a sense of humor.

The group date gave 13 lucky ladies the chance to compete in a photo shoot challenge to win a deal to appear on the cover of several famed romance novels. But it didn’t take long for the drama to ramp up, and an intense rose ceremony lied ahead.  At the end two girls went home on top of Katie who already left and they were Diana and Brooke.

On tonight’s show A potential record-breaking date for the world’s longest on-screen kiss gets Lesley M.’s heart all aflutter, while the claws come out at a very competitive volleyball group date that reveals some of the women’s true colors. Sean’s magical date with AshLee at an amusement park is shared with two girls who suffer from a chronic illness. The Bachelor has one more surprise for his date and the girls: a private concert by his favorite country group, Eli Young Band. However in the middle of this, one bachelorette takes a nasty fall down the mansion stairs – or is it just her way of getting Sean’s attention? Finally, Sean stirs up a shocking finish to the night right before the rose ceremony.

Sean starts the day working out.  His voice-over is heard saying, “I had no idea I would have feelings for someone this early.  I could see myself spending my life with one of these girls.”

There are only 16 girls left.  It is announced that there will be 3 dates today.  One group date and 2 one on one dates.  Of course everyone wants the one on one, but Leslie M. is the chosen one.

Sean is excited for the date.  He has something special planned for Leslie.  When they get to their destination, Leslie is less than impressed.  They are at the Guinness World Record museum.  Sean proceeds to show her that his father is in the world record book and her demeanor changes.  Now she’s enjoying herself.  Sean announces that he wants to break his own record with Leslie.  They walk through a set of curtains and a timer is set with an audience to watch.  The will attempt to break the world’s longest on –screen kiss record.

The current record is 3 minutes and 15 seconds.  A representative is there to verify their time.  Before the two begin they get nervous and have turned red from embarrassment.  They are awkward and laughing most of the time.  Members of the audience say they look awkward, but the pair continue and try to avoid parting.  Once they stop touching the time stops.  Time is up and they give each other a real kiss.  Sean and Leslie have broken the record.

Sean and Leslie spend the evening on the roof of the Roosevelt Hotel.  Sean says he like spending time with Leslie.  Now he wants to know more about Leslie’s childhood.  Leslie says she wants a marriage like her parents.  The still hold hands and are madly in love.  She’s scared she will never find that.  Sean tells her not to be scared because the person she’s going to have that with could be sitting right next to her.  Then she kisses him.

Back on the rooftop, Sean offers Leslie M. a rose before the date is over.  Somehow or magically confetti falls all over them.

The group date is taking place on the beach.  Of course all the girls are in bikinis and throwing themselves at Sean, who might I add has no shirt.  Chris Harrison shows up.  His announcement is that the girls will be splitting up into two teams and play volleyball.  The winning team gets to continue the date.  The losers go immediately home.

The game starts.  I’m pretty sure no one has ever played volleyball in their life.  The girls are getting frustrated and are just ready for the game to be over.

The winning team is enjoying their time in the water with Sean.  The losing team is crying.

The 6 members of the winning team are dressed up and ready to enjoy their time with Sean at his place.  Lindsay is the first to get some face time with Sean.  She tells him that he’s perfect on paper and that she feels the chemistry.  Then he kisses her.

Next girl up tells Sean, “I’ll never get tire of hanging out with you.”  She is in the friend-zone for sure.

Amanda is up.  She tells Sean that she can add a light and airy atmosphere to his life.  He agrees and kisses her.

Kacie is next and tells the girls she’s going to be selfish.  During her alone time with Sean she tells him about the drama going on between Desiree and Amanda.  He wants to know why she is telling him this.  Why is she getting in the middle of things?  She says she doesn’t know.  She feels that she is stuck in the middle and felt that she had to tell him what was going on.  Sean tells her that he wants to spend time with Kacie not this crazy person.  Kacie’s plan has backfired.

The alone time mini sessions are over and Lindsay gets the rose.

Back at the house, the girls find out that Ashley gets the next one on one date.

Ashley is getting ready for her date.  She plans on talking about her adoption and other aspects of her life.  She believes nothing will go wrong on the date.

As the girls are at the house you hear something in the background.  Tiarra has fallen down the stair and hit her head.  She seems out of it.  Sean shows up and believes she may have a concussion.  Paramedics arrive and Ashley admits that she is disappointed that this happened during her one on one time.

Tiarra does not want the paramedics to take her anywhere.  She makes a big deal and the paramedics agree not to take her to the hospital.  All the girls are skeptical that anything was really wrong with her and they are beginning to get upset because Sean is spending time alone with her.

Tiarra and Sean are talking.  He tells her that he knows that the situation may be embarrassing for her, but if she is really hurt she needs to go to the hospital.  She says she is fine and they begin to joke around.  Sean says that he is sorry that she fell, but at least the two of them got some one on one time together.  The rest of the girls feel bad for Ashley who is all dressed up and waiting in the kitchen for her date.

Sean and Ashley are finally on their date.  Sean says he is looking for someone with a caring compassionate heart and the ability to act like a big kid. The pair have an amusement park all to themselves.  They are sharing the day with a pair of girls who are part of a program for kids with chronic illnesses.  Briana and Emily have been best friends for over a year, but they have never met in person.  Sean is surprising the two by having them meet up and enjoy the park together. Ashley admits that the date is perfect and they are enjoying watching the girls spend time together.  Sean is excited that Ashley is so compassionate and comfortable with the girls.  The night is ending with a private concert for the four of them with the Eli Young Band, Sean’s favorite band.

Ashley is finally alone with Sean and is telling him her story.  She tells of being abused by a foster family, but when she was adopted at 6 her family showed her nothing but love. During his “after date” interview Sean admits that Ashley seems like the type of girl who has had it all.  He cries after hearing her story and offers her a rose.

Time for the cocktail party, but first Sean has a surprise for Sarah.  He walks her outside and a limo pulls up to them.  Sarah starts to freak out and cry.  She tells him that he can’t do this to her and he can’t send her home.  To ease her nerves he hurries to open the limo door and her dog Leo is there.  She is so excited.

Kacie steals Sean away and apologizes for their last time alone.  He tells her that they had a moment before and then took two steps back with her gossip about the girls.  Then they are interrupted by two more girls and their alone time is over.

Time for the Rose Ceremony

As Sean holds a rose he stops and takes Kacie outside for a minute.  He tells her that he respects her too much to make her stand through another rose ceremony.  He tells her they are better off as friends, and he puts her in a waiting limo.

Sean is back inside and explains the situation.  Now it’s time to pass out roses.