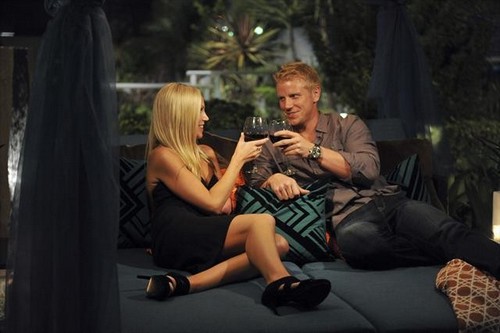 THE BACHELOR Sean Lowe returns to ABC tonight with a new episode.  On tonight’s show fierce emotions explode when the women confront their fears, their jealousy and one deceptively charming women as they battle for Sean’s attention.  Did you watch last week’s premiere?  We did and we recapped it for you HERE.

On tonight’s show the 19 remaining bachelorettes move into the mansion with hopes that they will end up as Sean’s soul mate and future wife. But first our Bachelor has a few tricks up his sleeve, as he takes Sarah on a jolting one-on-one adrenaline date, while Desiree gets the full hidden-camera prank treatment to see if she has a sense of humor. The group date will give 13 lucky ladies the chance to compete in a photo shoot challenge to win a deal to appear on the cover of several famed romance novels. But it doesn’t take long for the drama to ramp up, and an intense rose ceremony lies ahead.

Sean whisks Sarah AWAY via helicopter to the top of one of Los Angeles’ highest buildings. He holds out a sweet reward: a romantic picnic – but only after the couple free-falls 300 feet to the ground. Despite the difficulty of having one arm, Sarah is ready and willing to attempt the perilous fall. Later she shares her emotional story about being physically challenged and how she strives to overcome this hurdle. But how will Sean receive this message? Will he accept Sarah wholeheartedly, or will her dream date end in heartbreak?

Recap:  Sean really enjoyed meeting all the ladies and really feels that his future wife could be amongst these women. The first date has arrived for the women, Sarah gets the first one “are you ready to fall in love today?”.  Sean shows up in a helicopter to pick up Sarah and she’s ready for her date.  Sarah is thrilled that she is the first one on one date, everything is happening the way she wanted it to.

Sarah is terrified, her date consists of a free fall 360 feet from the ground with 40 feet per second, but they are taking the plunge together. They did it, 35 floors down and they share an endearing hug when they reach the bottom.

In the evening, Sarah confides in Sean about what her dad told her about finding the man for her, she needs someone who has faith and courage in her. Sarah goes on to tell him about the longest relationship she has ever been in which is three years. Sean takes Sarah on the roof and gives her a rose.

Thirteen girls are going on a group date where they go on a fashion shoot and act out scenes from steamy romance novels. Sean is really anxious and exiting for this shoot. Tierra is excited about the date but she can’t believe how some of the girls are acting. Meanwhile, Robyn can’t stand Tierra and hates it when she says that she is “au natural”.  The girl that makes the best photo with Sean will get a three book cover deal and that is Kristy who flaunts her victory in front of everyone.

Sean goes and has a little alone time with Lesley and when he tries to kiss her, she interrupts with saying something mundane and ruins the mood – but he still likes her. Everyone wants the rose and Daniella included, Lesley purposely leaves Sean with a peck on the lips in front of her.  Next, Sean takes Kacie aside and tells her that he is really shocked that she is on the show, he thought she only felt like friend with him. Kacie tells Sean that he always treated her like a lady and she liked that. Selma has some one on one with Sean and loves how sweet he is. Tierra is thrilled because Sean singles her out to tell her that he wants her to stick around.

A new date card has arrived, it’s for Desiree “love is priceless” and Jackie is not thrilled, it’s her birthday tomorrow and can’t believe she didn’t get it.

Katie is upset how over the top all the personalities are and is not adjusting well; she searches out Sean and tells him that his is not the right setting for him and feels like she needs to go home. Sean doesn’t even hesitate to walk her out. The other women are thrilled, especially Kacie who is super stoked that one less girl she has to fight against and feels she’s got the rose in the bag. Time for Sean to give out the rose and as Kacie predicted, she gets it. Tierra is furious and damn if I don’t see a little Courtney Robertson in her personality, hopefully she doesn’t go psycho on Sean.

Sean is getting ready for his date and he is planning a little practical joke on Desiree when they visit an art gallery and she thinks she is responsible for breaking a very expensive piece. In the end, Desiree is such a great sport and Sean couldn’t imagine doing it to anyone else.

At dinner, Desiree and Sean discuss their families and are happy that they have so many similarities. In the pool, the chemistry between the two of them was like sparks flying, Sean could really see himself marrying someone like Des.

It’s time for the second Cocktail Party and Sean is pretty sure which two women he is sending home tonight who he doesn’t feel that he has made a connection with.  Sean takes Lindsay aside and finds out a little more about her and likes what he discovers. Meanwhile, Amanda is making everyone feel uncomfortable, she is actually being rude to the other women, doesn’t talk to them and they have a hard time reading her. Robyn wants to find out if Sean is attracted to black females and sits down with him and asks him straight out. Sean likes the question, he claims not to have a type, he is just looking for someone that is sweet and likes to have a good time.

Selma has her time to spend time with Sean is thrilled while Amanda is still causing a lot of negative attention in the house and the rest of the girls want to see her gone. Sean singles out Amanda and all of a sudden, she comes to life.  Lesley finds it very alarming that Amandea has two personalities and while Desiree is not alarmed by Amanda, she is upset at the way she acts and thinks Sean deserves better than her.

Time for the Rose Ceremony, to everyone’s shock Amanda gets the final rose. There are two girls going home on top of Katie who already left and they are Diana and Brooke.