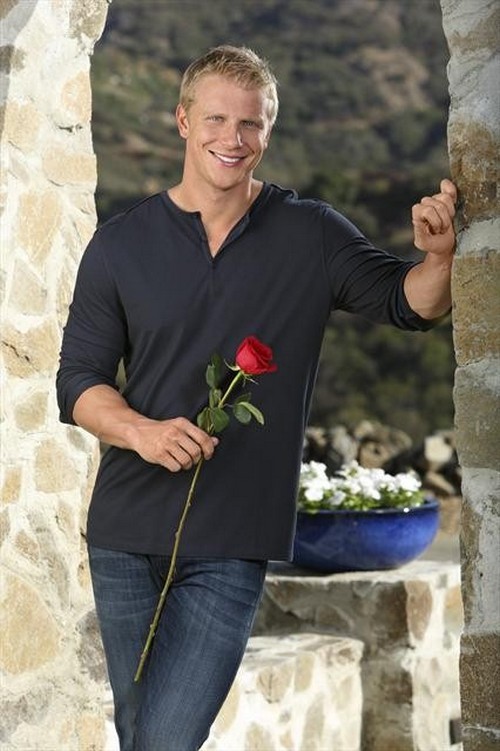 Can you believe The Bachelor is still on television?  Regardless of the fact the whole show leaks before the season even starts, people keep coming back.  Tonight is the season 17th season premiere of The Bachelor 2013.  Our new bachelor this season is Sean Lowe, 28, the handsome business entrepreneur from Dallas, meets 26 potential soul mates as he begins his exciting search for true love.  You might remember Sean he was on last season The Bachelorette, Emily Maynard.  Emily did not choose Sean.

Sean prepares for the night of his life as the 26 beautiful bachelorettes, all clamoring to meet him, begin to arrive. Jackie, a beautiful makeup artist, makes sure Sean will remember her, kissing him emphatically on the cheek. Robyn, an oil field account manager and former cheerleader, falls for the Bachelor right from the start, back flipping out of the limo — but tumbles right on her rear. Kelly, the attractive cruise ship singer, looks to her possible future with Sean and croons an original love song to him. Sexy Ashley P. stuns the Bachelor with her in depth knowledge of the bestselling novel, Fifty Shades of Grey, while pulling a tie out of her cleavage. And Lindsay is all ready to walk down the aisle, dressed in a bridal gown, and steals the first real kiss of the night.

Sean shakes up the night when he decides to hand out early roses to women with whom he has an immediate connection. But not all the women are that lucky and wonder how to impress him to get a coveted rose. Sarah reaches out with honesty and sincerity, not afraid to show her vulnerability. But Lindsay decides the best way to handle the situation is to come on strong.  Finally, after Sean’s first rose ceremony, 19 women will remain to compete for his affection and, in the end, his heart.

If you NEED to know what happens tonight on the premiere episode, we posted some juicy tidbits HERE for you enjoyment.  If you don’t want to know, don’t click!

We will be live blogging the premiere tonight of The Bachelor 2013, Sean Lowe and you just know there is going to be tons of drama, cat fights and tears.  So come back tonight at 8PM for our live recap of The Bachelor 2013 Sean Lowe premiere.  While you wait for the recap, hit the comments and let us know if you will be tuning in this season?

Recap: Sean Lowe is our new Bachelor from Dallas, Texas, he loves his career and is down to earth family man.  First, we get a glimpse back at Sean and Emily’s journey where he describes himself as very vulnerable it that situation and it was the first time he ever pictured himself spending the rest of his life with someone. In the moment when Emily gave the rose to Arie not him, he was completely blindsided; everything he thought his life was supposed to be, was gone. Sean credits his great friends and family for helping get over Emily. Sean is eager to have a family and spending his time with the people he loves.

The thought of Sean being The Bachelor is slowly sinking in and he is hoping that the end result is that he finds someone to love.

Sean’s friend, Arie comes over for a visit; they both fell in love with Emily had their heart broken by her. Arie thinks this is going to be tough for Sean and tells to make sure his delivery is smooth. Arie goes on to give Sean advice about kissing, since he has a reputation for being the best kisser from his season of The Bachelor. In the end, Sean is ready for possibly the wildest night of his life.

We get a glimpse into the lives of some of the 25 girls, Desiree is a bridal consultant and looking forward to finding Mr. Right,  Tierra is has fallen in love twice and had her heart broke both times, Robyn is sick of being single and wants to fall in love, Diana owns a hair salon and she is a single mom of two children, Sarah is an average girl but she was born with one arm, Ashley P. actively looks for a boyfriend but hasn’t met Mr. Right yet and get this – she has an obsession with 50 Shades of Grey, Lesley is looking for a nice southern gentleman, Kristy is a Ford model and thinks the girls will be jealous of her and AshLee is a Professional Organizer who is adopted but still thinks she is blessed.

Time for the limo exits; AshLee is the first one out and tells him it’s the best first, not last. Jackie gives him an endearing hug and puts her mark on him right on the cheek with bright red lipstick. Selma pulls Kleenex out of her cleavage and wipes Jackie’s kiss of Sean’s cheek. Leslie is nervous and tells Sean that he is cuter in person. Daniella gives Sean a cool handshake. Kelly wrote him a song and sings it to him. Katie teaches Sean a yoga pose. Ashley P. gets right into her obsession with 50 Shades of Grey. Taryn promises Sean a lot of fun. Catherine  calls Sean a hunk. Robyn does two black flips and hits her head on the ground, but Sean says he is still impressed. Lacey gives Sean a heart of lace. Paige was on Bachelor Pad 3. Tierra has a heart tattoo on her finger that is open and tells Sean that she hopes he is the guy to close it to which Sean leaves her to go and get a rose because she made that much of an impression on him. Tierra walks in with her rose and the claws come out – the other girls are clearly pissed, game on! Amanda tells Sean she wants the awkward pause now to get it out of the way, then it’s done. Keriann drove over 2000 miles for a shot with him and hopes the adventure continues. Desirie brought pennies to make a wish together in the fountain. Sarah asks Sean if this how he imagined to fall in love and he says no. Brooke tells Sean she is ready for this wild and crazy journey with him. Diana wants to call it night and leave with him. Lesley M. brought a football and does a little play with Sean. Kristy tells Sean she brings the best from the midwest. Ashley H. says “Hi Ken, I’m Barbie”. Lauren would love to take Sean home and cook for him but her dad sends a message, if he breaks her heart, her dad is going to break his legs. Lindsay shows up in a wedding dress and she plants a kiss right on Sean’s lips. Wait! there is a surprise for Sean, a girl that requested to be on the show just for him…. who is it? Kacie. B. from Ben’s season of The Bachelor and she tells him that she knows she doesn’t deserve a second chance but that is why she is here. Sean is worried about what the other girls are going to think about Kacie being there. And, when Kacie walks in there are tons of tacky and forced smiles and handshakes.

Sean is clearly overwhelmed, but excited to spend time with them. Sean sits down with Kacie and tells her that he is really surprised to see her and excited to explore if there is anything between them. Sean starts giving out more roses to other girls and they are wondering what this means, is there a first impression rose. Selma also gets a rose and she understands what is going on, Sean is just giving the roses to people that have great energy and that he feels he has had a connection with. Lindsay is feeling a little insecure and hoping that Sean got the joke about her showing up in a wedding dress, unfortunately she has drank too much and throws herself at him and Sean is only willing to give her a kiss on the cheek.

Ashley also drank too much and starts booty dancing in front of the girls, then steals Sean from one of the girls. The girls are all pushing for alone time with Sean but Taryn refuses to go after the one on one time if he doesn’t come and get it and he does, but to her dismay he chooses to spend time alone with Brooke who is sitting beside her. Sarah approaches Sean and tells him that she wants to clear the air about her having one arm, she doesn’t want him to feel uncomfortable, he gives her a rose.

It’s time for the first Rose Ceremony and Kacie, along with some of the other girls, are really worried because they didn’t get roses. Twelve women have already got roses, here are more that are given out; Amanda, Lesley M, Kacie B., Kristy, Daniella, Taryn and Lindsay. That is it, there are no more roses to hand out tonight. Paige is really disappointed, after failing on the Bachelor Pad and now again, it sucks. Kelly is embarrassed because she sang for him and really doesn’t know what he saw in the rest of the girls. The disappointed in the girls that were jilted is clear, but Sean is hopeful in the ones that are left that he will find his happily ever after.