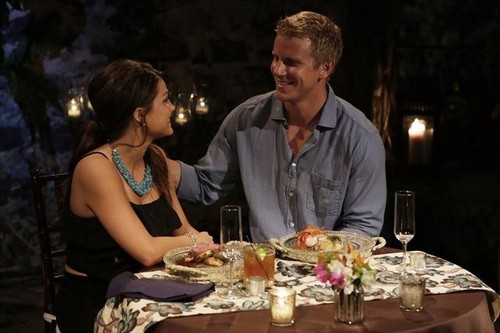 THE BACHELOR Sean Lowe returns to ABC tonight with a new episode. Tonight is the biggest meltdown in”Bachelor” history takes center stage as hometown dates loo during a hot trip to St. Croix for Sean and the remaining six women.  Did you watch last week’s episode? We did and we recapped it for you HERE.

On last week’s “Bachelor” it was a two night special event which concluded as Sean continued his journey around the world to find love, taking the nine remaining bachelorettes to spectacular Alberta, Canada.  Nerves were at an all-time high, and Sean’s feelings were growing for all of the women, but six remained at the end of the night.

On tonight’s show the pressure mounts as the crucial hometown dates loom, but before returning stateside, Sean takes the remaining six bachelorettes to romantic St. Croix. AshLee not only risks revealing a secret about her past, but also decides to go on the attack when it comes to Tierra. Tierra, feeling anxious about her relationship with Sean and how the drama with the other women will influence his decision, desperately discloses something that will shock him. Lesley’s individual date has her re-thinking her strategy.

Sean, confused over whom he should send home, invites his sister to St. Croix to help him sort through his feelings. A huge drama erupts at the hotel and Sean knows what he must do, dropping two bombshells and leaving the four women who will take him home to meet his families.  Cannot wait to see what the meltdown is tonight, rumor has it that it is all about Tierra.  Chris Harrison tweeted today, “It’s meltdown Mon people! See you tonight in St Croix #Bachelor.”

Sean and the remaining girls have just arrived in St. Croix.  The hotel is amazing.  The water is amazing.  Everything is just gorgeous.  The girls are so excited and chatting about their plans out there and Tierra uses this time to bring out the roll-a-way bed and make herself her own space in the living room…and the drama begins.

A note from Sean tells the girls that Ashlee will be going on the One on One date with him.  Tierra is not happy.  The girls are wondering what her problem is.

One on One Date

Ashlee and Sean are on a boat enjoying each other’s company and they end up on a private island.  As they are together Tierra comes up again.  Ashlee is complaining that Tierra is not polite and that she is concerned Tierra will show her true colors and hurt Sean.  Sean believes everything that she says.

Second One on One Date

Back at the house, the girls find out Tierra will be enjoying the next one on one with Sean.  This is exactly what she has been waiting for.  To everyone’s surprise Tierra has nothing but complaints about the possible conditions of the date, from bugs to sweat to make-up dripping off.

One on One Date

During a romantic dinner Ashlee feels that she has to come clean to Sean.  She is completely worried that this will make or break his decision.  She tells Sean that 15 years ago, while having serious problems with her family, she was in a relationship which led to her getting married at 17 years old.  She got married as a high school junior and divorced as a senior.  To Ashlee’s relief, Sean is okay with that detail in her past.  After screaming, “I love St. Croix,” Ashlee then yells out “I love Sean.”

Second One on One Date

Today is Tierra’s time alone with Sean.  After Ashlee gave Sean an earful about Tierra’s personality, he feels that this is his chance to find out what she is really like.  Sean takes her shopping and they dance in the street with a parade.  Sean feels that her energy is off the charts and he is having so much fun with her.  They are both ecstatic about the day’s events so far.

Back at the house the girls are excited because they believe Tierra will be going home after all of the gossip Sean has been hearing.

Sean gets his chance to talk to Tierra and her answers do not seem to be making him happy.  She portrays herself as the victim again and he asks her if she would react differently if given the chance and she says, “No.”  This does not bode well for Tierra.

At their private dinner, Tierra confronts Sean about being distant.  He is taken by surprise and didn’t even realize that he was acting distant.  He realizes that Ashlee’s comments about Tierra affected him more than they should have.  Tierra uses her time to profess her love for Sean and he truly appreciates this.  In the end he knows that Tierra may not get along with the other girls in the house, but she is genuine with him.

The girls find out that Catherine, Desiree and Lindsay will be enjoying a group date with Sean; which leaves the third and final one on one date open for Leslie.

The next morning, Sean walks in the girl’s room while they are still sleeping.  His goal is to catch them without makeup and to let them know that they only have 5 minutes to get ready.  Mission accomplished.

In the jeep they girls are anxious to know where they are going.  They pull over and Sean tells them that they are on the eastern most part of the U.S. and they would be the first 4 to see the sun rise.  The girls love it.  He tells them that they will also watch the sun set, but they would have to be on the other side of the island for that.  Until then, they have a lot planned for the day.  They go to the Sugar Mill, to the Café, and to the Treehouse.  The girls are starting to get annoyed that Desiree is occupying most of his attention.

Sean and Lindsay are enjoying alone time on the beach.  She tells him she’s not going anywhere.  Sean says he is crazy about her.

Sean and Catherine are together and Sean feels like she has something she wants to tell him.  Catherine tells a story about her father and his battle with depression.  She wants him to know that at 14 years old he tried to kill himself in front of her and her sister.  He admires her for being such a great person despite that set back.

BACK AT THE HOTEL

Ashlee and Leslie are talking to each other on the balcony and they start gossiping about Tierra, who happens to be a few feet away from them.  Tierra is fed up with them.

Sean and Desiree get their time alone and she tells him that her family means everything to her.  When the group gathers Sean offers the hometown rose to Lindsay.  Des is shocked and visibly upset.

Third One on One

Sean and Leslie are on their one on one date.  Sean feels that he hasn’t had much time with Leslie and really just wants some peaceful time to talk.  He feels as though he is not as close to Leslie as he is with the other girls.  Leslie knows that she needs to tell him how she feels, but she is finding it hard.  She’s had several opportunities to tell him, but she misses each mark.

Sean is having problems figuring out what to do and he needs advice.  His sister, Shay, comes down to help him out.  He tells her that he has a connection with all of them and he could see himself marrying them so he’s finding it hard to decide which four to keep and which two to send home.  Sean tells her that the only one he has a question about is Tierra since her name has been coming up since day one.  Shay reminds him of the only piece of advice she offered him before he went on the show; “Do not pick the girl that nobody likes.”

Meanwhile, back at the hotel, Tierra is in the middle of an argument with Ashlee which begins to include the other girls.  Sean, not knowing what is going on, tells his sister that he will grab Tierra so they can all talk and she can give him her opinion of her.  As he gets to the room he find Tierra alone and crying.  Tierra admits that she confronted Ashlee because she feels that she is trying to sabotage her.  Sean is visibly upset and has to step outside to weigh his feelings against his sister’s advice.

Upon returning to Tierra, Sean makes the decision to send her home.  He tells her that she means the world to him and Tierra tells him, “obviously not.”  He walks her to a waiting van and she is on her way.  When he gets back to his sister he tells her that he had to let her go.  His sister tells him that he needed to think about what was best for both parties.

Ashlee is very scared and worried.  She knows that she is the cause of this last drama scene with Tierra.

Sean shows up and presents the first rose to Desiree.  Lindsay is safe because she got her rose on the one on one date.  The next rose goes to Catherine.  The final rose goes to Ashlee.

The choices seem to be tough for Catherine who admits that Sean had more in common with Leslie than with herself.  Leslie is heartbroken.