The Bachelor Sean Lowe Gets Physical With Desiree’s Lovestruck Ex-Boyfriend! 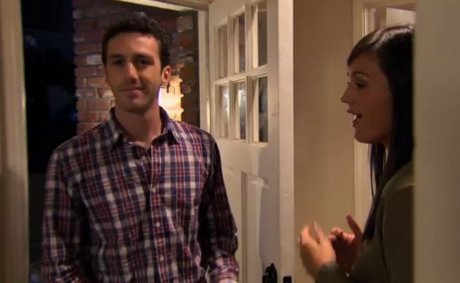 The Bachelor Sean Lowe is getting ready for his one-on-one dates where the ladies will introduce him to their families. Now, at this point in the game, even more drama is likely to ensue — as not everyone is totally on board with the The Bachelor‘s methods of producing loving and healthy relationships. Sometimes, we can’t blame them. The drama is going to escalate on tomorrow night’s episode of the show during Sean and Desiree’s date. As they prepare dinner for her family, they get a surprise visit from Desiree’s ex-boyfriend.

He comes into the house, surprised by the cameras, confused as to what Desiree’s doing with Sean (who he thinks is an “actor”), and confesses his love for Desiree. Sean doesn’t know how to react and, in true Bachelor cheezeballs fashions, the cameras cut to a clip of Sean’s fist, which is somewhat clenched. But, in all actuality, I think that’s probably just how the dude keeps his hand.

Sean asks Desiree if she wants to talk to him. She says no. That’s when Sean suggests that maybe it’s time for him to hit the road. The Ex puts a hand on Sean, and that’s when Sean tells him not to touch him — to get his hands off the goods! The clip ends there and we’re not sure if a fight’s going to break out or if noses are going to get broken or if bloody knuckles are going to put a damper on Sean and Desiree’s glorious meet-the-parents dinner date.

Honestly, the whole thing seems extremely scripted, but that’s no surprise with this show. Seriously, it sounds like the dude is reading off a teleprompter or notes written on his hand *sigh*. Make sure to check out the clip by clicking here for all the crazy corniness (the clip is titled “Ex Boyfriend Sneak Peek”).