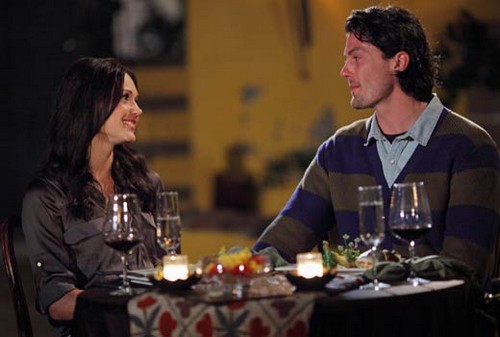 Fans of The Bachelorette know that Brooks Forester made quite the impression on Desiree Hartsock this season, especially when he walked away from her and the show as the final two were about to be chosen. Well now the hunky heart-breaker is taking to Twitter to let everyone know what a good guy he is.

Brooks has been retweeting up a storm.  All of course were compliment about him, girls professing their love for him, you get what I am saying. It was like he was ego boosting himself through social media and he so got called out for it by one of the producers from the show, who called him lame for retweeting compliments. Brooks response was “Do what I want #unconditionallove.” Well does that just say a whole heck of a a lot does it?

The recent revelation on Twitter goes seamlessly with his actions on the show.  He did what he wanted when it came to Desiree and he will do what he wants on Twitter. I hear he is getting a lot of flak for breaking Des’s heart but I give the guy credit for being honest and coming clean with her. I personally like his whole do what I want attitude. I mean he wasn’t a jerk about it all, on the show anyway. On Twitter now he was kind of coming off like a douche but that is what happens when you use the cyber world to express your feelings.

Call me crazy but I am Brooks fan, I started following him on Twitter as soon as the show began. Something tells me that Brooks will continue to do as he wants and as he does it he will gently fade out of the semi spotlight he created for himself by being on the hit ABC show.

What do you think about Brooks’ little Twitter remark was he being a douche or honest? Tell us what you think in the below comments section.