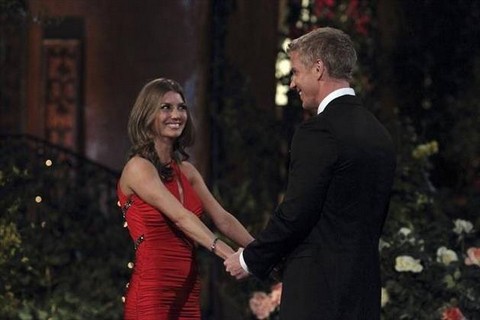 What do you do if you’re a The Bachelor contestant that didn’t find love with Sean Lowe?  Well, if you’re Ashlee Frazier you look to the guy sitting beside Sean I guess. While vying for that final rose Ashlee couldn’t help but notice that the show’s host, Chris Harrison is a good looking guy and super nice.  By the time the After The Final Rose special taped everyone else couldn’t help but notice how Chris and Ashlee were flirting up a storm.

According to In Touch magazine, Ashlee wouldn’t mind a date or two with Chris to test the waters either. She believes the two of them are on the same page when it comes to dating.

“I  think he [Chris] just gets it and part of that is because I’m older. You’re in a different place in your life.”

Chris should get it, he was married to former wife Gwen for 18 years before pulling the plug on that relationship. At the time there were rumors of Chris’ infidelity and dalliances with some women connected to the show. I wonder if Ashlee knows about any of that stuff.

Regardless, I think she has a better shot of finding love with Chris than she did as a contestant on the show. At least anything with Chris would be based on real life and not a limitless fantasy that would make anyone the happiest that they’d ever felt.

What do you think of the possibility of Ashlee and Chris getting together? Surely the host of America’s most popular dating game deserves another shot at love himself, right? Should they test things out or do you wish Ashlee was cast as the next The Bachelorette instead? Tell us your thoughts in the comments below!