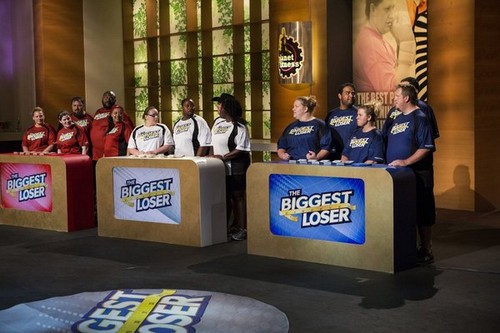 THE BIGGEST LOSER returns to NBC tonight with a new episode.  On tonight’s show contestants bid on gym equipment in the first ever auction.  Did you watch last week’s premiere episode?  We did and we have a full and detailed recap, right here for you.

On last week’s show the dreaded “week 2 curse” was on all the players’ minds, especially when they learned that only one person’s weight on each of the three teams would count at this week’s weigh-in. And they did not know who it was beforehand, only when a roll of the die at the scale determined who will represent the red, white and blue teams. One lucky group got a weigh-in advantage if they won the first challenge of the season, a water-bucket race that tied each team’s fate together in more ways than one. Also this week, one player got sobering health news from Dr. H, another contestant connected with a very special family member and the show caught up with one of last season’s popular child ambassadors to see how they were doing now.

On tonight’s show the contestants are surprised to find that the gym is empty – and the only equipment they’ll be able to use is equipment they’ve successfully bid on with “Biggest Loser” bucks in the show’s first ever auction, run by host Alison Sweeney. Trainers Bob, Jillian and Dolvett and the players have to get creative to make the most of their limited equipment. Later, one player opens up to her trainer about her difficult childhood, and all of the contestants re-charge their spirits with a very special treat – getting to skype with their loved ones back home in emotional, heartwarming family visits. Then it’s time to head to the gym for a very emotional weigh-in. Also this week, the show catches up with season 12 fan favorite Vinny Hickerson.

In the beginning of The Biggest Loser, it shows Fernanda’s progress after leaving the Biggest Loser camp; she’s now currently 195 pounds and is continuing with working out and being healthy in general. Fernanda’s life has had a great improvement after losing weight, and she plans to stick with doing so. Bob is going to be talking to Matt one on one, Bob talks about how Matt was supposed to get married this week; but Matt talk s about how he wants to be the best version of himself for when he marries his wife. He feels selfish for being at The Biggest Loser camp; he doesn’t have any time to fail this second chance he was given at a better life. Bob tells Matt that he will not regret for being at the camp, that when he’s done at the camp he’ll feel a lot better.

Everyone enters the gym, all the equipment is gone; it turns out that there’s the first Biggest Loser auction. They’re given a budget of Biggest Loser dollars to buy from ten different types of equipment, whatever they buy is what they’re team will use. The contestants believe that they should buy whatever their trainer makes them use the most; Hap starts off with winning the auction of the weights and kettle bells. Now it’s for treadmills, the bid starts at 150, Ruben bids, but then Hap bids; but then Jay bids on it and wins the treadmills.

The white team believe that they need to win this, all three teams are fighting for the mystery box; they really want this box. The white team wins the mystery box, it turns out that it’s a bunch of bags of flour and sugar. The last item is The Biggest Loser trade voucher; the white team trade their baking ingredients for the red teams boxing equipment.

Jillian arrives at the gym and sees the aftermath after the Biggest Loser auction, Bob arrives too and sees what his team got, Dolvett sees that his team got barely any equipment; but that won’t stop him at all. The three teams are with their trainers, and they’re working hard with what they’ve got. Bob is making Matt work harder than anyone else on his team; he really wants to get his mind off of his marriage and what not.

Jillian is making sure that her white team is going to be working hard, so that they don’t lose again this week. Tumi wants to show Jillian how she can do her best and be competitive. Bob wants Happy to carry Holley on his back across the gym; Holley is reluctant at first but does it. The white team is having fun with the boxing equipment, the red team is working hard; in fact all of the teams are working their ass off with the workouts.

Dolvett doesn’t believe that Tanya is giving a hundred percent in this workout; he wants her to go and give her best. Tanya can even notice that she isn’t doing as good as her teammates during the workout. Dolvett is talking with Tanya about how she needs to let pain come to her, that it’ll only make her stronger and better. Dolvett wants to know what Tanya is doing here at the Biggest Loser, Tanya mentions how she just wants to live; to make a difference for herself and her family. Tanya doesn’t want to neglect her daughter, like her mother did to her; Tanya goes on to talk about her abusive drug relying mother. It for surely wasn’t an easy life for Tanya to grow up, she’s in fact pissed with her entire family; because she told her family about her mother’s drug addiction and physical violence, but none of them did anything for her. Tanya starts to breakdown in tears, she doesn’t want anyone to feel the same way she felt with her mother, Dolvett mentions how she can’t be successful in life if she’s angry about the past, she needs to let it go and forgive. Dolvett wants Tanya to write a letter to her mother and her family, he wants Tanya to write her feelings down on paper, in order for her to start to forgive what’s happened to her. Tanya agrees to do what Dolvett wants her to do, he believes that Tanya is holding onto the pain from what’s happened to her in the past. Tanya begins to embark on her journey of forgiveness.

Bob talks about how all of the contestants have been putting their all in the workouts, it turns out that they’re letting the contestants talk to their family on the computer. Matt tells his wife that his spirit is a little bit broken, because so much of him is still at home; he feels like he left his wife hanging, but his wife tells him that he doesn’t need to worry about that, she supports what Matt wants.

Ruben begins to cry while talking to his mother, because they’re like best friends and he misses his entire family. Craig is talking to his wife, he wants to know if his child is either a boy or girl, turns out that she’s a girl; this gave Craig a boost of motivation. Jennifer feels great after speaking to her family, Matt can’t wait to get back in the gym and David is pumped to work hard.

The contestants arrive at the weigh in area, we’ll see how well the people trained with the equipment they bought. Matt is up first for the blue team, from 325 he is now down to 319. Hap is up he was 373 pounds and now he is 358. Chelsea is up next, from 223 she is now 220 pounds; Bob is surprised by his team’s weight loss so far. Holley lost six pounds this weight in and now Bobby is up from 328 he is now 321 pounds. The blue team have a total of 27 pounds of weight lost, it seems that the equipment lost made a big impact on them.

Ruben is upset with the number he got, he doesn’t want to be the one who’ll be going home tonight. Tanya is up next, from 242 pounds she is currently 242 pounds; this week she lost no weight at all. It looks like Tanya is going to be going home tonight since she lost the least amount of weight tonight. Dolvett decides to use his save on Tanya tonight, personally it wasn’t a great choice; but let’s hope she makes the most of it.