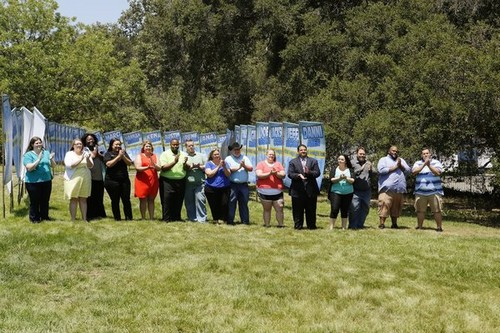 THE BIGGEST LOSER returns to NBC tonight with a new episode.  On tonight’s show a roll of the die determines whose weight will count at the weight-in.  Did you watch last week’s premiere episode?  We did and we have a full and detailed recap, right here for you.

On tonight’s show the dreaded “week 2 curse” is on all the players’ minds, especially when they learn that only one person’s weight on each of the three teams will count at this week’s weigh-in. And they won’t know who it is beforehand, only when a roll of the die at the scale determines who will represent the red, white and blue teams. One lucky group will get a weigh-in advantage if they win the first challenge of the season, a water-bucket race that ties each team’s fate together in more ways than one. Also this week, one player gets sobering health news from Dr. H, another contestant connects with a very special family member and the show catches up with one of last season’s popular child ambassadors to see how they are doing now.

RECAP: Jillian talks to Craig one on one to talk about giving him a second chance, Craig tells Jillian that he’s here for his children. Craig admits that he’s scared ever since his dad passed away at the age of 32, Craig then tells her that he blamed his self at first. Jillian tells Craig this isn’t how he’s going to honor his father, losing weight won’t get rid of the guilt; he needs to forgive and forget. Jillian wants Craig to do it for his kids not for his father, to make a change for his children’s lives. Dolvette brings Ruben to the doctor to get him checked out, because of heart problems he’s had. The doctor did three different tests for Diabetes and it seems that Rubin has had high blood sugars, it turns out that Ruben is diabetic. Rubin admits that he’s afraid of this, he doesn’t want to live with health problems. The doctor tells Ruben that type 2 diabetes is reversible through will power and determination; and it seems that Ruben is prepared to get healthy. Bob is training his team hard, because they won’t be able to lose the same amount of weight that they did in the first week. Chelsea is confident in her self and with working out. Jillian’s training her team hard, Craig talks about how he’s prepared to work hard. Fernanda admits that she’s here at the Biggest Loser camp because she wants to save her relationship with her husband and children, being overweight makes it hard for her to be the mother her children deserves and the wife her husband deserves. Ruben says that thinking about the things the doctor said during the workout, makes him push himself hard. Dolvette is worried about Jennifer because she’s struggling with the working out, Jennifer admits that her daughter isn’t healthy, because she ended up learning eating habits from her. Jennifer just wants to make her family healthy, Jennifer wants to help herself before she’s able to help her daughter. Dolvette gives Jennifer a pep talk to see her stop struggling, to make her work hard during the working out sessions. Jennifer looks like she’s pumped and ready to go.

The Biggest Loser’s first challenge is about to begin, there’s dice and buckets of water placed everywhere, the contestants seem nervous about it. It turns out that only one person’s weight will count at the team weigh-ins, if they role a dice and they’re face appears on it then they’re the one who’s weight will count. Who ever wins the challenge will be able to roll the dice again and be able to choose from to people’s weight to count for their weight in. The challenge is for them to take a number of buckets over a hill, depending on what the number of the dice they role is how many buckets they can bring. Craig wants his weight to count because he wants to show his second chance won’t be wasted, Bobby doesn’t want his weight to count and same with Tanya. The challenge begins and the three teams are off competing. Matt admits that he postponed his wedding for this second chance, to go back with his weight lost and to be fully prepared for his wedding. The three teams are getting close to filling their tanks full of water, so far it looks like the red team is ahead, but blue is very close to them; the white team is struggling hard with their rolls of the dice. The blue team almost got it over the yellow line, but sadly they didn’t get enough and the same thing happened with the red team. Now the red team and blue team race over the hill to roll the dice and make it back.

It turns out that the blue team wins the challenge, the red team were so damn close, but didn’t make it in time. Chelsea is proud of her team, Tanya wants a rematch. Blue team has won the first challenge and will be rolling two dices at the wight-in this week. Hap received a call from his wife that she’s currently in labour, he then goes on Skype and video calls his wife to see his new born son. Hap looks pretty emotional from it all, but happy at the same time. This has got to motivate him to work hard lose wight for his family, can’t wait to see what he does from now on. Now they’re showing one of the kid ambassadors from the last season of The Biggest Loser, Lindsay talks about how she used to be a couch potato, but she is now a cheerleader. Jonathan, Lindsay’s brother was inspired by his sister and also began to lose weight also. Lindsay is proud of the person she’s become no after becoming a more healthy person.

Dolvette talks about a healthy snack for people to have, there are six flavours to choose from of these Uber bars. The blue team are training hard, Bob hates the roll of the die, because it makes it harder to prepare for the weigh in; though he’s happy to have the two rolls. Hap is working hard, in this last chance workout he’s training so damn hard and is looking like a champion. Happy is not taking the opportunity for granted, he wants to work hard to become a champion for his new son and to become the one he knows he is. Bob is very impressed with Hap, Hap ended puking he pushed himself that hard. Hap is very confident with the weigh in. Jillian doesn’t believe that she has the most luck at this point, the white team are working hard; Craig is just pushing himself so hard to get results because he wants to be the one to represent the team. Dolvette’s team is working hard, Dolvette is asking if his team is ready to represent the red team. The contestants talk about how they’re ready for this weigh in, that they’ve worked hard and will show results. Dolvette is first to roll his dice, Jennifer, Rachel and Ruben want to be chosen to represent their team.

Fernanda only lost 2 pounds and could have failed her team, such a low number. The red team are up on the scale, Jennifer goes first from 255 she is now 246 pounds. Ruben goes up and from 441 he’s now 431. Rachel goes up from 239 she’s 231 pounds. David goes up and from 371 he’s now 360. Tanya is up next to represent the red team, she steps up to the scale; from 246 pounds she is now at 242. It was very close, Tanya was two pounds away from failing the weigh in. The white team have los tonight’s weigh in, Fernanda will be going home now. Fernanda is not the Biggest Loser, she’s disappointed that she is the one who’s going home first.