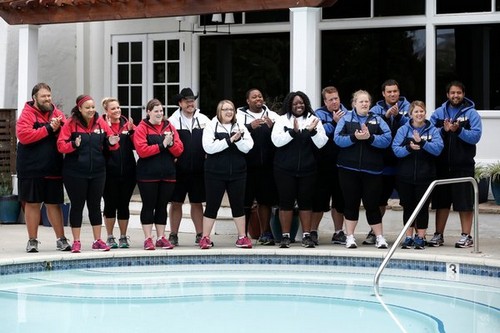 THE BIGGEST LOSER returns to NBC tonight with a new episode.  On tonight’s show contestants compete in a fun cooking challenge with last season’s kid Ambassadors and White House nutrition expert Sam Klass.  Did you watch last week’s premiere episode?  We did and we have a full and detailed recap, right here for you.

On last week’s show it was Halloween at the ranch, and that meant a pumpkin challenge and the contestants’ first temptation of the season. Off the players went into a field of 100 pumpkins filled with candy treats, cash prizes and a winning ticket giving one lucky player one of the biggest prizes ever awarded in a challenge – immunity for their whole team. Later, one trainer brought a special group of people to work out with his team, while another trainer had a heart-to-heart talk with a contestant about their challenging childhood.  We got to catch up with last season’s child ambassador, Biingo, to see how his life – and the lives of his family members – had changed since he was on the show.

On tonight’s show aast season’s kid ambassadors Biingo, Lindsay and Sunny return to the ranch and are joined by the White House Senior Policy Advisor on Nutrition, Sam Kass, for a fun cooking challenge with the contestants. Well aware that kids are often the toughest food critics, the red, white and blue teams race against the clock to prepare a nutritious and tasty dish that will be a hit with the kids – and earn the winning team members an incredible prize. Also this week, one team works out with a very special and inspiring group of women who have survived or are battling cancer. Later, it’s time for the weigh-in and saying goodbye to another contestant.

RECAP: Now the red team and White team are now down one player each, it goes to all three teams sitting together; Tanya talks about how they’ve had big losses with Ruben and Fernanda going, Tanya’s upset with Ruben leaving because of how committed he was to losing weight and wanting to eat healthy. Craig agrees that Ruben was a strong competitor and that it’s sad to see that he’s left the Biggest Loser camp, Rachel believes that Ruben was the light in their team and hopes the red team is able to stay strong without him. Dolvette knows that the red team could use some more motivation, he brings them to a group of cancer survivors who are working out trying to stay healthy, and he wants to show that if these individuals can do it then the red team can. The woman who’s the leader of the cancer survivor group says that many people have been touched with it and she wants those who survive it to live healthy after it; David mentions how his wife died of cancer, that he’s seen his wife take her last breath and he even had to tell his daughters the bad news when it happened. David finds it incredible what these ladies are doing; it inspires him to workout hard today with them. They begin with jumping jacks, Rachel says that they’re going to take this motivation and use it to win this week; that they’re ready for it. Tanya talks about how much of a beautiful spirit that was felt during the workout, she mentions how what they’re fighting threw during the workouts isn’t as bad as those who are going through chemo therapy; which means that have no reason to complain. It turns out that today it’s not about exercise, it’s about nutrition; there as a special guest is the nutritionist at the White House, today is going to be a cooking challenge. Tanya feels that she’s very confident with cooking; Holley is intimidated by this because she’s no confident with how well she’ll be able to do competing against the others. Last season’s three child ambassador’s show up showing much progress in their weight loss and health. All of the kids are prepared to be very blunt and honest with the food they make, since they’ll be the taste testers. They’ve got thirty minutes to make a dish, it’ll be graded on taste and healthiness; the winner of the challenge will get $5,000 worth of groceries for a year. The challenge begins, Holley takes a second to strategize about what they’re going to do they decide to do a quesadilla because It’s something that everyone likes; with fresh fruit and kale chips. The red team is going to do an around the world kind of dish with making several different meat pita things along with Greek yogurt and fruits. They mention how they’re focusing on using healthy ingredients, and making them taste well. Holley begins cutting the vegetables for the blue team, getting them ready. There are three minutes left to cook everyone is getting ready to plate their dishes before time runs out, they all made it in time. Now it’s time to judge the food. The red team present their dish, which is only 380 calories it seems like they did pretty well. White team show their quesadilla with kale chips, all of them are quite impressed by it. The blue team present their quesadilla and Bingo really liked it. Sam Kass was impressed with all their meal, he brings up that the kid ambassadors are great. Sam believes that the blue team had the best dish; they were able to get Bingo a young man who hates vegetables to eat more of it. The blue team win again, Hap is extremely happy with winning the challenge. After the challenge Jennifer wants to talk to Bingo and his mother to speak about her daughter and how to make changes within the family to lose weight and become happy. Bingo brings up some golden advice about not having any junk food in the house so there is no temptation; Bingo’s mother then says if she doesn’t bring in bad food then her family won’t be getting it. Bingo’s mother believes that Jennifer can do it; Jennifer is excited to go home and share what she’s learned in the Biggest Loser camp. The white team are swimming and working out, Craig mentions that the blue team still has a save and none have their team mates have left. Craig is having a hard time with swimming, because he doesn’t know how to swim and he’s afraid of water. Jillian says that she wants Craig to face it and win this competition; he needs to conquer his fear in swimming. Craig knew that Jillian really wanted him to do it after she jumped in the water, Craig talks about how his father passed away when he was ten; he wants to become the father his father wasn’t able to be. Craig begins to swim and conquer his fear to show that he really wants this, way to go Craig you did it like a man. Craig is really showing progress and he’s grateful for how Jillian helps push him.

Dolvette tells the team that Tanya isn’t going to be making it to the workout today, she’s sick and can’t get out of bed; Dolvette wants everyone to pull it through, Rachel is worried that Tanya isn’t at the workout. They need to win this weigh in, Bob tells the blue team that they can’t rest even though they’ve been winning the challenges; they need to prove there’s a reason why they keep winning the challenges. Chelsea is surprised with how much stronger she’s gotten, she can notice the difference compared to when she arrived. The blue team are working hard. The red team are also working hard, to make up for being one team member down; they’re on fire and I hope that this time they win. Tanya talks about the problems she had this morning that she could barely move and walk; she mentions how the red team lost Ruben, she goes to the gym and workouts more. All the teams enter the weigh in room and prepare themselves, last week Jillian broke the rules and gave caffeine supplements to her team without telling the doctor; now everyone on her team will have a handicap on their weight loss, Ruben will be coming back next week. Jillian is very sorry for this; she’s upset because this only affects her team. Bobby gets on the scale from 317 pounds he is 297 pounds, Holley lost 19 pounds, Hap lost 15 pounds, Chelsea lost 13 pounds and Mat lost 21 pounds. Craig gets on the scale from 350 he is now 336 pounds, Marie gets on the scale from 225 she is now 213, Jay gets on and loses 13 pounds, Tumi lost 13 pounds. The red team get on the scale; David lost 13 pounds, Jennifer loses 12 pounds, Tanya gets on the scale from 239 pounds she is now 224 pounds, Tanya is happy that she’s finally lost weight it’s about time honestly. Rachel gets up onto the scale from 216 pounds she is now 198 pounds. This week the red team wins, looks like the white team has lost tonight, Craig is going to be going home. Craig says that no one should feel bad for him, that everyone’s going to have their time. Craig lost 49 pounds while being at the Biggest Loser camp, now he’s been given the strength to do anything. Craig says that the next time America sees him they will see a happier and healthier Craig.