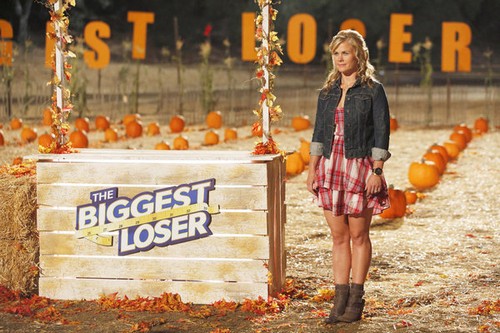 THE BIGGEST LOSER returns to NBC tonight with a new episode.  On tonight’s show contestants race through a pumpkin patch looking for one of the biggest prizes ever awarded in a challenge.  Did you watch last week’s premiere episode?  We did and we have a full and detailed recap, right here for you.

On last week’s show the contestants were surprised to find that the gym was empty – and the only equipment they’ll be able to use is equipment they’ve successfully bid on with “Biggest Loser” bucks in the show’s first ever auction, run by host Alison Sweeney. Trainers Bob, Jillian and Dolvett and the players had to get creative to make the most of their limited equipment. Later, one player opened up to her trainer about her difficult childhood, and all of the contestants re-charge their spirits with a very special treat – getting to skype with their loved ones back home in emotional, heartwarming family visits. Then it was time to head to the gym for a very emotional weigh-in. Also this week, the show caught up with season 12 fan favorite Vinny Hickerson.

On tonight’s show It’s Halloween at the ranch, and that means a pumpkin challenge and the contestants’ first temptation of the season. Off the players go into a field of 100 pumpkins filled with candy treats, cash prizes and a winning ticket giving one lucky player one of the biggest prizes ever awarded in a challenge – immunity for their whole team. Later, one trainer brings a special group of people to work out with his team, while another trainer has a heart-to-heart talk with a contestant about their challenging childhood. “The Biggest Loser” catches up with last season’s child ambassador, Biingo, to see how his life – and the lives of his family members – have changed since he was on the show. And later, the players get a motivational boost with coveted letters from home before heading to the weigh-in, where another player is eliminated.

Craig from 357 he is now at 350. Tumi gets on the scale, from 287 she is now currently at 280 pounds. Jay gets up on the scale now, he’s scared to death about this weigh in though. From 253 he is now at 244 pounds. Now the red team needs to lose more than 35 pounds to win the weigh in, Rachel is first from 224 she is now 216 pounds. David steps up on the scale now, from 354 he is now 347 pounds. Jennifer is up next from 242 pounds she is now at 236. Tanya is up next, she gets up on the scale from 242 pounds she is now currently at 239 pounds. Tanya is extremely disappointed with how much she didn’t lose. Ruben is the last to weigh in from 428 pounds he is currently now at 423, Ruben worked so damn hard this week; but he surprisingly didn’t lose what he expected to lose. Tonight someone will be eliminated from the show, tonight Ruben will be eliminated from the Biggest Loser; this isn’t fair at all. To see that Tanya is staying while Ruben is going home, it’s a sad thing to see a man who works so hard leaving. If only Dolvette didn’t use his save card last week, things could have been better for him.