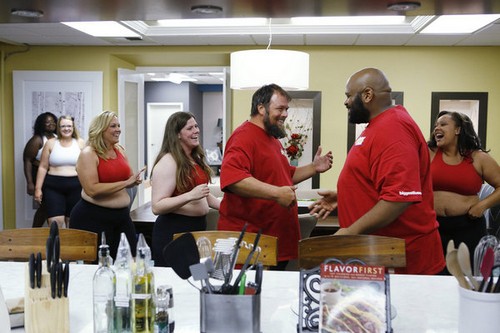 THE BIGGEST LOSER returns to NBC tonight with a new episode.  On tonight’s show music icon David Foster guest stars, along with Season 14 winner Danni Allen.  Did you watch last week’s premiere episode?  We did and we have a full and detailed recap, right here for you.

On last week’s show a past season’s kid ambassadors Biingo, Lindsay and Sunny returned to the ranch and were joined by the White House Senior Policy Advisor on Nutrition, Sam Kass, for a fun cooking challenge with the contestants. Well aware that kids were often the toughest food critics, the red, white and blue teams raced against the clock to prepare a nutritious and tasty dish that will be a hit with the kids – and earned the winning team members an incredible prize. Also this week, one team worked out with a very special and inspiring group of women who have survived or were battling cancer.

On tonight’s show it’s a busy week at “The Biggest Loser” ranch, which kicks off with a fun bouncing ball challenge that will award members of the winning team a welcome cash prize. All of the contestant take an emotional walk down memory lane watching their casting audition videos, reminding them why they are at the ranch — and how far they’ve come in just six weeks. Ruben and Dolvett visit music icon and 16-time Grammy Award winner David Foster at his home, where Ruben isn’t the only one stepping up to the microphone. And the show’s most recent “Biggest Loser” winner, Danni Allen, stops by for lunch and a pep talk with the contestants. Then it’s time for another tense weigh-in, where one more contestant will face elimination.

RECAP: We see Craig who’s lost a ton of weight, now he’s looking pretty good; when Craig got home he went and spoke to his father at his grave, because now he feels that he can finally talk to him. Now Craig realises how losing his dad affected him in a big way, now that he’s at where he’s at, Craig believes that he can do anything at the moment. Craig trains every day at the gym and can’t wait to show off at the finale, it cuts to Ruben who’s now given a second chance to stay at the Biggest Loser camp; Tanya enters the house first and see’s Ruben sitting there waiting for his fellow red team members. Tanya is happy that Ruben is back, because he’s a very encouraging man. When Ruben left he continued eating right and exercising at the gym; everyone is glad that he’s back. Jillian goes and talks to her team members alone, she apologises to the White team; she mentions how she makes her decisions for the best for their health. Jillian feels bad; because her team did nothing wrong and they’re the ones who have to suffer for her mistake. Jay says its fine and that they need to move forward and work together as a team, they need to stay strong with their few team members in order to win. Rachel is excited for the challenge tonight and for having Ruben back. Tonight’s winners for this challenge will go home with a thousand dollars, Dave likes the money; but he also wants to win to prove how much stronger he’s gotten. The challenge is to bounce a ball over a ravine to a team mate, then that teammate needs to bounce that ball into a bin worth points; they need to reach 30 points to win the challenge. Hap wants to win every challenge from here on out, Matt knows that they’ve got a lot of momentum tonight. The red team wins the challenge, David showed off some extremely impressive skills with his timing and hitting the balls into the three points worth bins; each team mate wins a thousand dollars

Dolvette is making his Red team work their asses of, Dave believes that the Red team has finally gotten that mentality that they are winners; that they can succeed in beating the blue team. The Red team are pumped after beating the blue team during the challenge; I believe that’s where they’ve gotten their confidence from. Rachel is happy that she’s finally gotten friends now, compared to the life she was living before; she believes that they’re like a big family. Dolvette tells them all that he appreciates their motivation and hard work in the workout this week. Bob is pushing the blue team hard, he wants them to stay focused because he knows that the Blue team might feel a little discouraged after losing the challenge. Bob can see that Chelsea is working hard, and Chelsea wants to make a difference with herself. Matt wants to work extremely hard to make sure Bob doesn’t have to use his save to help him out; he wants to go all the way without a save. Jillian wants the White team to work extremely hard; she wants them to push themselves to their full potential. Jay understands that the stakes are high this week, while running on the treadmill Jay ends up throwing up; after ding it he doesn’t give up he keeps going, Jay knows what he’s worth and is willing to take the hits in order to strive for success.

All three teams walk into the kitchen, and find three DVD’s and a card; they get to the computers to find out what’s on the DVD’s. David believes that this will give them a new found motivation, the DVD’s are about themselves in the past; their videos of them wanting to lose weight. While watching himself in the past Matt can see how hard it was, that it’s not a silly video that it’s in fact serious. Rachel gets emotional from her videos; Jay can’t believe how big he was back then. Hap says the best part of it was the end of the video, when it went black and he could see his reflection off of the screen. Everyone’s watching David’s video together, in the video you can see the difference in him from then and now; in the video it tells his story of his wife dying of cancer, everyone looks pretty emotional from watching it. Danni Allen comes to give a surprise a visit for the new biggest losers; she wants to have lunch with them all. Danni tells them all that she won her first marathon, Rachel feels that she’s a very motivational woman; Danni tells them about how Subway is something good to eat. Dolvette takes Ruben to his music producers house, he gets to meet David Foster in person; David is proud of Ruben for what he’s doing. David understands that losing weight will make Ruben’s performance far better and give him more confident. Ruben’s lost so far 50 pounds, David looks proud of him. David wants to find a song for Ruben to sing, a song that’ll kind of represent what Ruben is going through as of now. Dolvette wants to watch Ruben at work, since Ruben has seen Dolvette at work; to have a better understanding of each other. Dolvette says that it’s amazing to see Ruben sing in person; now David wants Dolvette to try and sing the song. David says that Ruben is doing great work with losing weight; David mentions that he appreciates how Dolvette is helping Ruben it’ll make everything easier.