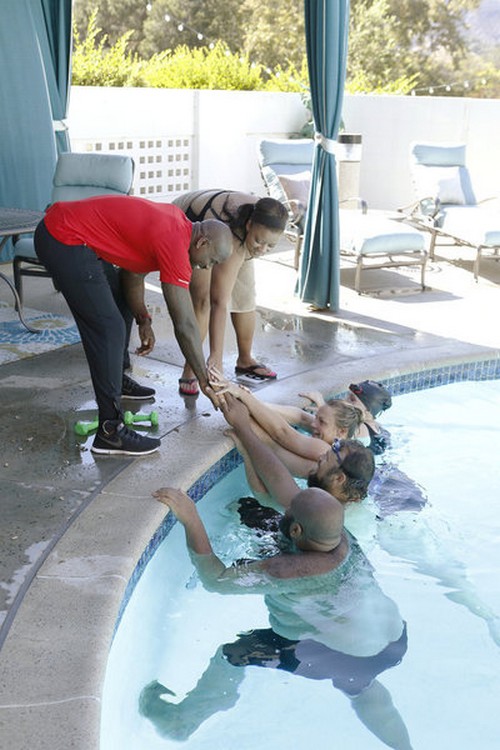 THE BIGGEST LOSER returns to NBC tonight with a new episode.  On tonight’s show one contestant goes home with their trainer, and has to lose enough weight to keep their whole team safe.  Did you watch last week’s premiere episode?  We did and we have a full and detailed recap, right here for you.

On last week’s show the contestants celebrated Thanksgiving week with a special challenge – racing to load boxes of Thanksgiving food into trucks headed to help tornado victims in Moore, Oklahoma, where one player had a special connection. Members of the winning team were very thankful for their prize – a holiday dinner shared at the ranch with loved ones flown in for the celebration. Emotional reunions followed, as the winning team, their trainer and their family members gathered for a Thanksgiving feast and shared what they are most grateful for. Also, one player got encouragement from his trainer to talk to his family about a long-kept secret, and the show caught up with one of season 14’s child ambassadors, Sunny, to see how she was doing today. Then it’s time for weigh-in and another elimination, which left one trainer giving a very tearful and emotional farewell to one of their players.

On tonight’s show host Alison Sweeney kicks off this week’s episode with a shocker – one of the contestants is going home and taking their trainer with them, and their weight will be the only weight that counts for their team when they return in time for the weigh-in. A simple spin of the wheel determine who will be chosen among the players, who would love to reunite with loved ones but are understandably anxious about the intense pressure they’ll face trying to lose enough weight to keep their whole team safe another week. Meanwhile, one trainer brings their contestant back to a sport they once loved, and two players celebrate milestones at the weigh-in before another contestant is sent home.

The Biggest Loser season 15 episode 8 airs at 8PM on NBC and we will be live blogging it with all the up-to-the-minute details. So make sure to come back to this spot and spend the evening with us!  Make sure to refresh often to get the most current details and updates!

RECAP: All the teams had to say goodbye to Holley, but she’s not the only one leaving the ranch; tonight is a double elimination, but it turns out they’ll be in the next weigh in. One person will be chosen to represent their team in the weigh in next week, it’ll be decided by the spin of a wheel. No one is wanting to go home, Rachel is up first to put her picture on the wheel. Whoever goes home will have to go home with their trainer also, Hap is up next to put his picture up. Everyone has already put their pictures on the wheel, and the wheel is now spinning. Jay wins the spin, he wants to go home; Jillian feels worried about Jay going home because she feels like he won’t come back. Jay is excited to bring Jillian home to meet his family. Jay is now going to visit his family, he can’t wait to pack and go see his family. Jay says it means everything to go home, to show his family the results of his hard work so far. Jay arrives home, he’s already tearing up just getting there. Jay opens the door and his family and friends are all there to see him. Jay is hugged by his wife an children, Jay says all the hard work he did has been worth it so far; that his family are the main reasons why he could work so hard at the ranch. His wife says that Jay looks like a new man now, Jay says that coming home also came with a sacrifice; he introduces Jillian to his family. Jillian is shocked by how much of a close community he has supporting him. Jillian says it’s great for Jay to be with his family, but his weight is the only one that counts and they need to work hard. Holley shows her after results, she mentions how she’s now training for her first competition in a while; Holley wants to lift a heavier weight than what she was doing at the Biggest Loser. It shows Holley lifting heavy to show that she’s training for the Olympics.

Dolvette’s workout is like an NFL combine, he knows that there’s competition in the house; the biggest loser is Rachel, but Jay is right behind her. Dolvette says that this workout would have been great for Ruben if he was the Ruben who was 17, Dolvette brings Ruben his Football jersey he wore when he was 17 years old; now Ruben feels more motivated. Dolvette knows that Ruben has a lot of work ahead of him and he wants to make sure he worked hard. Bob says that he knows the white team doesn’t have a trainer because Jillian is with Jay. Bob says that even though Jillian is gone, Bob says that he won’t let them get away with not being able to keep up. Bob is making what’s there of the white team at the ranch and the blue team work hard, showing that no matter who your trainer is they want you to have the same results. Bob knows that Jillian is with Jay at his hometown and he knows that Jillian is killing Jay. It shows Jay working hard with Jillian alone, they’re working out in his barn. Jillian says that the gym has state of the art equipment and what not, though she knows that all she needs is body weight to give Jay a good workout. Jay understands that he’s home and would love to spend time with his family, but he has something much more important to do in the meanwhile. Jay look like a beast, no one can mess with him on the scale.

Dolvette decided to take Rachel to the pool today, he wants her to swim; Dolvette wants to see Rachel at her best. It’s been six years since Rachel has ever been in a pool, Dolvette know that she has a fear of swimming and he wants her to face those fears. Rachel used to be a national swimmer and had scholarships offered for it, she chose to be with their boyfriend instead of taking the scholarships she was offered. A bad break up came up after and she reiected on food to help ease the pain. Rachel couldn’t swim as fast as she used to, Dolvette has Rachel swimming more to beat her time. Jay tells Jillian how he’s lived at this farm for awhile, he wants Jillian to learn more about him so she can get to know who he is better. Jay shows Jillian many locations around the farm, he talks about his parents getting divorced and his child hood home being burnt to the ground. Jillian wants to know what this place means to Jay, he says it means everything too him because this is where he grew up as a kid. He mentioned that there were several things in the house he wished didn’t burn, Jillian wants to know what died after the situation. Jillian wants to know what died that day his child hood home burnt down, Jay says he did and tears up a bit. Jay says he doesn’t know how to deal with it, Jillian says the best way is to let it be and not move on. Jillian wants Jay to channel his anger into productivity like his workouts, to bring more power into them. Jillian admits that she’s glad she got to visit Jay’s home.

Dolvette says that this week is the Red team and the Blue team vs Jay, Dolvette wants the red team to work twice as hard to go up against Jay a man who puts up amazing numbers every week. Jennifer is so proud and thankful that she has made it so long and is still hanging in there. David says that week eight is another milestone for hi, he wants to work hard for his family.Ruben says that he feels great being in the 300 pound mark now, Dolvette says a new Ruben has appeared and that he’s realized the work he needs to put into this. Bob says he needs to get his Blue team to stay focused and work hard, he wants them to win the weigh in. Hap talks about how stressed he is, because hes working so hard and is surprised how Bobby doesn’t work as hard and is putting up bigger numbers than him. Jillian is training with Jay using boxing equipment, he’s training in the place he used to train his horses. Jay is working hard, he understands how much effort he needs to put into his workouts because there are people relying on him. Jay is going hard than he’s ever gone, this is what true motivation looks like.