The Blacklist Battle: James Spader Hates Working With Megan Boone – Becomes A Bully On The Set 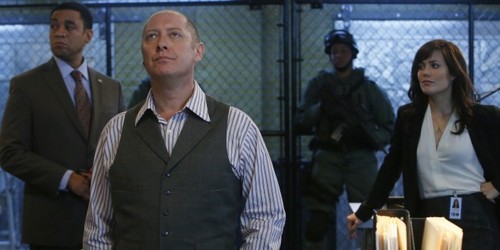 Megan Boone really hit the ground running when she was cast as Agent Liz Keen in NBC’s instant smash-hit The Blacklist, but nothing could have prepared her for working so closely with James Spader. He has decades worth of experience to Megan’s short-lived stint on Law & Order: LA and it really shows during filming. According to the Nov. 11th print edition of National Enquirer on one particularly bad day Megan blew 12 takes which left James to keep rehashing complicated dialog until he lost it.

Those set side say that Megan’s inexperience is really showing and rather than trying to help her through it James ends up losing his patience until he turns into a big bully. Also being a great method actor means that James in in character as long as he is on set which totally creeps people out. That much I can understand. How can you go from being normal and a nice guy to a total psychopath once the camera rolls? It’s probably better to remain in character, making him far more believable in the role of Ray Reddington.

I think that the onscreen chemistry between James and Megan is definitely working in spite of her kind of needing to find her way as she goes. It was also a predictable situation don’t you think? James is the equivalent of an acting genius and putting him with a novice on screen was going to have its share of problems. In spite of that, the show is clearly working and the powers-that-be have absolutely no intention of changing anything at this point so it sounds like Spader is going to have to bite his tongue a little more while Megan catches up. Are you a Blacklist fan? What do you think the real connection between Keen and Redd really is? Tell us your thoughts in the comments below!