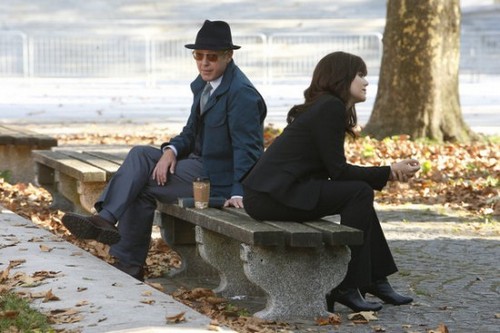 Tonight on NBC their new criminal drama, THE BLACKLIST starring James Spader continues with a new episode called, “Gina Zanetakos.” On tonight’s show Red informs Liz and the FBI that the next name on the Blacklist is beautiful and deadly corporate terrorist, Gina Zanetakos. Did you watch last week’s episode? We did and we recapped it right here for you!

On last week’s episode Red found out that The Courier – a middle man that no one crosses – was delivering a package worth millions of dollars to an Iranian spy. Only the Courier is a ghost no one including Red, knew what he looked like. While racing to stop the mysterious criminal transaction, Liz, inadvertently found herself thrust into a dangerous kidnapping plot. Meanwhile, Ressler had to finally accept that Liz is a valuable asset to the team.

On tonight’s show after Tom (Ryan Eggold) confronts Liz (Megan Boone) about the box – he claims he’s innocent and insists that they turn it into the FBI so his name can be cleared. Elsewhere, Red (James Spader) informs Liz and the FBI that the next name on the Blacklist is beautiful and deadly corporate terrorist, Gina Zanetakos (guest star Margarita Levieva). Diego Klattenhoff, Parminder Nagra and Harry Lennix also star.

Tonight’s episode 6of The Blacklist is going to be great and you won’t want to miss it. So pop some popcorn, grab a snuggle buddy, and definitely tune into this hot new series! While you wait for our recap, hit the comments and let us know if you are excited about this new series.

RECAP: We see a man and a woman, they blow up a car and the woman wants it radioactive, in 36 hours. Liz and Tom are having a fight, he says that the passports don’t belong to him, nor the money and gun. Tom says he does not go around assassinating people, it is her job that got him beat up. Tom says that anything evil or bad comes from what she does, not what he does. Tom tells her to call the FBI if she thinks he does things bad, she picks up the phone and he then tells her it is a huge misunderstanding. Liz makes the call, she makes clearance for an incoming client, her husband.

Tom is under custody, Liz tells him he is going to be ok, he just needs to tell the truth.

Cooper meets with Liz and tells her that she does good work, especially since she has been with Red. Cooper wants to know more about her husband. Liz tells him that she found the passports, money and gun in the floorboards of her house. Cooper tells her that he is putting her on leave until this is all over with her husband. Malik is the one who interviews Tom.

Red meets with Liz, he tells her that there is a woman Gina, she is a corporate terrorist and she needs to find her, she is his lover.

Red is talking to Cooper, he tells him about someone dangerous; then he threatens Cooper and reminds him about an incident in Kuwait.

Malik is still interviewing Tom, he claims that he had a meeting by coincidence at the same time that there was an assassination at the Angel hotel. Liz tells Cooper and Kessler about Gina, they do a search on her and find out that she is in town. Liz looks at Gina’s ID and feels like she has seen her before.

Gina is in a hotel with some guy, she is dressed in a blond wig, once she finds out that he did what she wanted him to, she kills him. Gina makes it look like a suicide. Meanwhile, Liz and Ressler arrive at the hotel too late, they find the guy passed out on his floor. Ressler catches an elevator and doesn’t realize that he is in there with Gina. Once other people get out of the elevator, Gina attacks Ressler’ she wins, he’s passed out in the elevator.

Gina dropped her phone, it gives the team some valuable information.

Liz meets with Red, tells him there wasn’t a single message on Gina’s phone to Tom, she believes he is innocent.

Malik is back with Tom, she shows him a photo of Walter Buress; the head master who he was supposed to meet with. Liz thinks Tom is being set up, she is watching him behind a glass while he is being interviewed. Liz leaves the room and goes to look at some of the other pictures, she sees one of the Angel hotel the day of the murder, Gina was outside of it. They find Gina’s room, Liz and Ressler are there and there are lots of guns. Liz is looking trough stuff and she finds a box similar to the one she found in her house and it also has photos, passports and money. One of the guys that is there with them finds a picture of Tom by Gina’s bedside. Ressler tells Liz that even though he admires her for taking her husband’s side, it is time she protects herself.

The team found that Gina was having funds sent to Maxwell, a bomb maker and they want Liz to go to Red to find him. Red goes to see Max and tells him that he needs more information about the bomb that he made for Gina, he won’t tell. Red tells Max he had this deal with Syria and could get him a cut if he helps.

Meanwhile, Tom is still in the questioning room and talking to the wall, he says he knows Liz is there and he did not nothing.

Max tells Red that the bomb will detonate in 19 hours. Red then tells Max to find out where the bomb is, call Gina, he promises that he will never be involved in this.

Ressler and Liz are ready to go, they know where Gina is thanks to Max and for Liz, once she gets Gina, she gets Tom. Gina makes a break for it, she knows that she is being followed. Liz is after her in an instant, she follows into a restroom and the two gets into a fight, slamming each other all over the place. Gina has the upper hand, she is about to stab Liz and Ressler shoots Gina about four times. Liz is so upset, she jumps down to Gina and tells her not to die.

Liz is furious that Gina was shot. Liz figures out that the target is the port of Houston, Gina was hired to bomb the port. Liz and Kessler arrive at the port and there are tons of storage containers; the bomb could be anywhere.

Malik goes in to see Tom, tells him his girlfriend has been shot, he thinks she is talking about Liz, but she throws down pictures of Gina on the table. Malik asks for the container number where the bomb is, Tom remains firm that he has nothing to do with this.

Liz thinks something is missing, she thinks that maybe the cargo got in by bypassing inspection; they find the bomb. Liz tells them to push the car into the water, let the bomb go off there to cause no damage.

Malik, Liz and Ressler go into the hospital to interview Gina, she is still alive. Gina tells them Red is the one responsible for everything and when Liz shows her a photo of Tom, she says she has never seen him before. Liz heads to the bureau and hugs Tom, she now believes that he had nothing to do with it.

Liz and Tom are heading to bed, the cameras are still on them – obviously I am not the only one who thinks Tom is dirty.