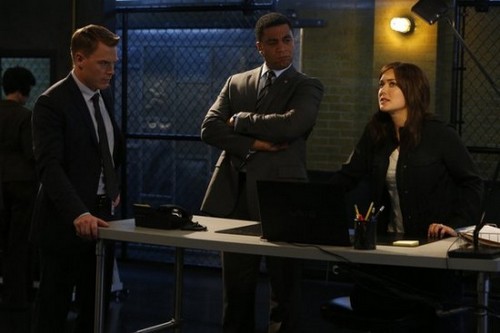 Tonight on NBC their new criminal drama, THE BLACKLIST starring James Spader continues with a new episode called, “The Courier.”  On tonight’s show Ressler (Diego Klattenhoff) must finally accept that Liz is a valuable asset to the team.  Did you watch last week’s episode?  We did and we recapped it right here for you!

On last week’s episode while continuing her investigation into the truth about Tom, Liz testified against drug lord, Hector Lorca. Later another witness was abducted when he was forced to testify against the dangerous drug trafficker.  Red’s interest is peaked and he informed the team that the witness might have been taken by “The Stewmaker” a man responsible for hundreds of missing and presumed dead people. Meanwhile, in an unlikely twist of events, Red and Ressler had to work together for the first time. Harry Lennix and Parminder Nagra also starred.

On tonight’s show Red (James Spader) finds out that The Courier (guest star Robert Knepper) – a middle man that no one crosses – is delivering a package worth millions of dollars to an Iranian spy. Only the Courier is a ghost no one including Red, knows what he looks like. While racing to stop the mysterious criminal transaction, Liz (Megan Boone), inadvertently finds herself thrust into a dangerous kidnapping plot. Meanwhile, Ressler (Diego Klattenhoff) must finally accept that Liz is a valuable asset to the team. Ryan Eggold, Harry Lennix and Parminder Nagra also star.

Tonight’s episode 5 of The Blacklist is going to be great and you won’t want to miss it.  So pop some popcorn, grab a snuggle buddy, and definitely tune into this hot new series! While you wait for our recap, hit the comments and let us know if you are excited about this new series.

RECAP: Liz has a bad dream that she confronts her husband and he tries to smother her with a pillow. She wakes up and her husband tells her that he has good news, their surrogate is going to go ahead with the pregnancy, they are going to have a baby.

We then see a guy who at this point I am thinking is “The Courier” who has someone named Seth Nelson tied up, he is going to kill him but Seth grabs his knife and stabs him. The guy is still ok and closes some sort of coffin over Seth.

Liz is at the bureau, she tells Ressler she has a done a profile on him, she then tells him that she knows that he doesn’t trust her and resents the fact that Red wants to work with her and not him.

Liz goes to see Red, he talks to her about Frederick, a great writer who died before anything was published and Red bought his house. Red is drinking something, Liz wants to know why she is there. Red talks to her about the courier. Once he is paid to do a job, he cannot be stopped, he will carry it out.

Red tells her that the courier is going to deliver a package to an Iranian spy named Hamid and he knows the location, a farmer’s market in Virginia.

Liz and Ressler are watching Hamid in the market, he makes contact with the courier and asks if he can break a hundred. All of a sudden there is gun fire and the Hamid is shot dead. The courier is on the loose, Liz and the team fast behind him. The courier stops his car, pulls out a machine gun and starts shooting. Malik is driving the car that Liz is in and she drives right into the courier’s car and slams it. The courier is out of his car, he hides behind a building and inserts something into his chest. Malik and Liz take him in and question him about the package.

Red won’t give any more information, he says that he gave them a blacklister, his job his done. Liz tells Red that the courier has all cuts over his body, he tells her to get a doctor. The doctor examines him, he tells them that he has a rare disorder, he can’t feel pain. The doctor examines the courier’s chest and finds something implanted in it. It is a video of Seth, the guy he killed.

Cooper is surprised that Seth is worth 20 million dollars. Liz says that they need to make the courier talk, Red is the guy who can do it. Liz goes to see Red and asks him what he knows about the courier that he is not telling. Red asks her what she has learned about her husband. Liz says that the gun she found in the box is linked to an open homicide. Liz tells Red that she and her husband were in Boston at the time of the homicide.

Red tells Liz that the courier has a drug dealer, he may be able to find the safe house address.

Liz and the team find the safe house: Liz finds a photo of two boys, also photos of Hamid who he was surveilling for days. The doctor tells Liz and Cooper that the courier has other things embedded into his skin. The courier, whose name is Tommy, finally talks, he says he will trade immunity for Seth’s life. Liz pulls out a photo of the two boys, she asks the courier if there is something he wants her to tell his brother when she brings him in.

Liz goes to see his brother who is in prison, she asks him about the courier. He tells Liz about these dog fights their father used to host but it wasn’t against two dogs, it was against a dog and Tommy. What it did to Tommy over time, he is broken, somewhere in his head a switch flipped.

Liz gets a call from Tom, he wants her to come home and he starts yelling at her. Liz tells him that she can’t leave, he is upset. After they hang up the phone, we see Tom looking into the floor panels and his secret box is not there.

Ressler pretends to be the courier and forces himself into a club to meet with a woman that used to work with French intelligence, Deschampbo. and she is upset that he shows up at her front door. Ressler tells her that he was set up, she says no, they were both set up. She wants proof that he is really the courier, she tells him that he can’t feel pain, prove it. Ressler takes a piece of glass and cuts his arm, she tells him he made one mistake, the real courier would have killed her if the Iranian was dead. Ressler fights to get out of the club,

Liz keeps getting text messages from Tom, she tells Ressler they have to make a deal with the courier, the life of Seth for his brother. The courier is loose, he cut himself.

Red interviews Deschampbo, he tells her she is going to be dead next, if she gives him info, he will guarantee her safety. She tells him that Seth is worth 20 million and she doesn’t care who he is. Red tells her that the courier knows who she is, where she lives and he gives her a day and a half before he finds her. She changes her mind, she will help him.

Ressler and Malik are out side in front of this cabin, they are looking for Seth and find a man walking and holding a bag, it is the courier and he is dead. Seth has 40 minutes left or to save him.

Red and Liz are trying to figure out where Seth can be, he now only has thirty minutes top. Red and Liz head to a refrigerator junk yard and Red figures out that Seth is buried under the dirt. They find him, Cooper tries to revive Seth and it works.

Red sends Liz a folder, it says “the answers you seek”, it is a file on her husband; he is a killer. Liz goes to see Red, he has a drink prepared for her, she is crying. Liz sits down, Red tells her that his favorite view is the light from the trees. Liz tells Red that she doesn’t even know why she is here, then she drinks.

Liz arrives at home, she calls Tom and finds him sitting in the living room. Liz tells him that they need to talk, he says that’s funny, he was just going to say the same thing to her. Tom pulls out the box with the cash and passports.