BY Dorothy Gale on October 14, 2013 | Comments: one comment
Related : Recap, Television, The Blacklist 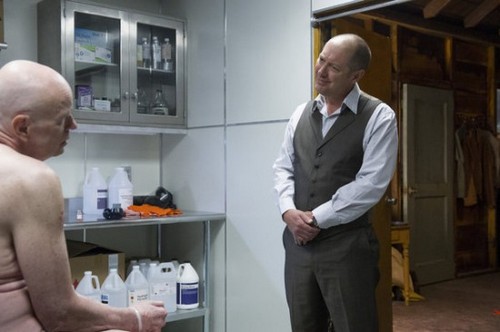 Tonight on NBC their new criminal drama, THE BLACKLIST starring James Spader continues with a new episode called, “The Stewmaker.”  On tonight’s show Red and Ressler (Diego Klattehoff) must work together for the first time.  Did you watch last week’s episode?  We did and we recapped it right here for you!

On tonight’s show while continuing her investigation into the truth about Tom (Ryan Eggold), Liz (Megan Boone) testifies against drug lord, Hector Lorca (guest star Clifton Collins Jr.). Later another witness is abducted when he is forced to testify against the dangerous drug trafficker. Red’s (James Spader) interest is peaked and he informs the team that the witness may have been taken by “The Stewmaker” a man responsible for hundreds of missing and presumed dead people. Meanwhile, in an unlikely twist of events, Red and Ressler (Diego Klattehoff) must work together for the first time. Harry Lennix and Parminder Nagra also star.

Tonight’s episode 4 of The Blacklist is going to be great and you won’t want to miss it.  So pop some popcorn, grab a snuggle buddy, and definitely tune into this hot new series! While you wait for our recap, hit the comments and let us know if you are excited about this new series.

RECAP: We see a man with his dog, he is taking a suitcase out of his car. The man removes his clothes, his teeth and glasses, his hair; the man is bald. He then heads into the shower and shaves everything. He then cleans up the tables puts plastic on the walls, the beds and covers the lamps.

Lizzie is in evidence room and she has discovered a box labeled “Angel Station”, it has something do with her husband again. Lizzie is back at the office and writing down the name “Angel Station”. Ressler walks in and tells her he wants to join her in court and watch Lorca put away for ever.

Red is sitting outside, Lizze walks up and tells her that he is very impressed with her but her case is about to go sideways. Lorcas people have reached out to Red, their request is of great interest because it concerns Lizzie. Lorca wants a new identity by the following night, for some reason he thinks he is going to be a free man. Lizzie says she has a witness and Red says he doesn’t think she is going to have a very good day at all.

In court, the lawyer talks about all the victims, 109 over six years. The witness identifies one of the victims as his son and says he knows who did it, he screams he knows who killed his son and then he falls over. The judge orders the courtroom to clear, Lizzie takes the witness and then hands him off to someone else. She goes down stairs to see Ressler and finds out that a juror was poisoned. Lizzie runs back up the stairs to get her witness and it is too late, he is gone.

Red is now in Haiti, he gets a phone call, it is Lizzie. Lizzie tells him that her witness is gone and a man’s life is at stake. Red tells Lizzie to go pour herself a drink and move on, the witness is probably dead.

We then get to see the Stewmaker again (the man who was shaving himself in the shower) he has the witness’ body, he throws him into a tub and pours acid over him, but first he takes a photo.

Lizzie can’t get that “Angel Station” off her mind and Googles it, but Tom walks in and she stops. He tells her that she is doesn’t look fine and he always knows when she is lying so no sense telling her otherwise. Tom looks at the note pad where Lizzie wrote a date, her wedding date. The two look at photos of them together in Boston and Tom asked when was the last time they did that, they need that, like right now. Before Tom leaves he tells Lizzie she is an open book and he always knows what she is thinking.

Lizzie gets a call from Red and she tells him that she found nothing from the crime scene. He then tells her to run her fingers on the tub, she smells chemicals, he tells her to get a plumber. Red tells her that the chemical expert has taken her witness and gotten rid of him, but he’s a trophy collector and he would have kept a piece of something to remind him of his kill. The Stewmaker is the key to so much more, anyone with a need and a means to pay, he has the answers to hundreds of unsolved murders.

Lizzie tells Red that Lorca knows where the Stewmaster is, Red agrees but they need to react fast.

Malik and Lizzie speak to Lorca, he says he has no idea where the Stewmaster is. Lorca advises that the Stewmaker is much more dangerous than they think and he would personally like to stick with Homeland than be released at the moment. Lizzie turns Lorca over to Homeland, he is about to get into a helicopter when it blows up. Shots are fired everywhere, Lorca is loose and Lizzie is taken.

Red finds out the Lizzie is taken and Ressler threatens him that he better not have anything to do with it. Red wants to meet with Lorca alone to bargain his way into getting Lizzie. Red tells Ressler that he lost her, he can find her. Ressler wants to go with him, Red says ok, but no wires.

Kessler is alone with Red who tells him to follow his lead. The two head into a bar, get frisked and then go through the kitchen to meet Lorca. Ressler gets pushed down to the floor with a blade to his neck, Lorca tells his man to be ready to cut off his neck. Lorca tells the guy to cut off Ressler’s neck, Ressler pulls the guy over and throws the knife down. Red gives Lorca all the papers he has been asking for, then tells him he will go to Venezuela in the morning. Lorca wants to leave right away, Red tells him it is impossible because everyone is looking for the FBI agent that he took. Lorca says that agent Keen will soon disappear it is the price they are going to pay or everything. Red wants the man who has Keen, Lorca says he doesn’t have a name and has no idea why the guy took her. When Red is about to leave, Lorca says he has a contact, that is all.

The Stewmaker has a name, Stanley Cornish. We now see Lizzie with the Stewmaker, he has her bound and he is walking her somewhere.

Red is in the car, he calls animal control and pretends to be Stanley Cornish, says that he lost his dog and needs his tracking device reset.

Lizzie is still bound, but she is sitting in a chair. Stanley finally talks to her, she tells him that she knows the name that people out there call him; he takes off her blindfold. Lizzie tells him he is called the Stewmaker because of how he disposes of dead bodies. Stanley says it is nature, he does it faster and cleaner.

Ressler storms into Cornish’s house, his wife is upset and wants to know what they want with her husband.

Lizzie is still trying to speak to Stanley, she starts to ask about his son, he is eleven. Stanley says he married late and his wife is not a nice woman. Lizzie says that it is her job to read people and she knows he is not a killer, he takes some metal rod and inserts in her neck, she screams.

Stanley’s wife tells Ressler about this place where her husband goes up north.

Lizzie asks Stanley what he just gave her, it is a sedative that will eventually causes paralysis. Lizzie starts screaming at him, tells him he doesn’t take life he just gets rid of them when they are done. Lizzie gets out of the chair, hits Stanley and then get out and runs as fast as she can. Meanwhile, Ressler is getting closer, hopefully he can find her in time.

Stanley and his dog have found Lizzie, he hits her in the jaw and then drags her body back into the cabin. Stanley takes a picture of her, she tells him she was wrong about him, he’s not perfect. All of a sudden, Red hits Stanley in the jaw and Lizzie passes out. We see Stanley’s dog with raw meat that Red gave him, he awakens Lizzie and tells her the effects are going to wear off and she is going to be fine.

Red asks Stanley, “should we get started”.

Red says, a farmer comes home one day to find out that everything that he loves is taken, he makes a promise to himself in those first few hours, years go by and his suffering becomes complicated. One day he stops, the farmer is no longer a farmer and sees the wreckage he has left in his way, he who slaughters and he knows in his heart that he must pay, doesn’t he Stanley? Lizzie says he couldn’t help it. Red says maybe, maybe he could make amends to all those that he has hurt so terribly or maybe not, then red takes the man and puts him into the bath that he intended for Lizzie.

Ressler and his team storm in and Red says it is all over. Red puts on his jacket and then looks at an album of Stanley’s victims, he takes out one photo. Ressler takes Lizzie out of the house, she almost falls and he hugs her while she is crying.

Later, Red gives the album to Lizzie and she tells Red that he is no better than Stanley, he is a monster, he says yes. Lizzie then asks Red how can he live with that and he says by saving her life.

Ressler tells Red that Lorca got away and he says it is the cost of doing business.

Lizzie is home, Tom surprises that he booked a trip for the two of them, tells her it will be fun. Lizzie looks at the brochure and it says, Angel Station Hotel.