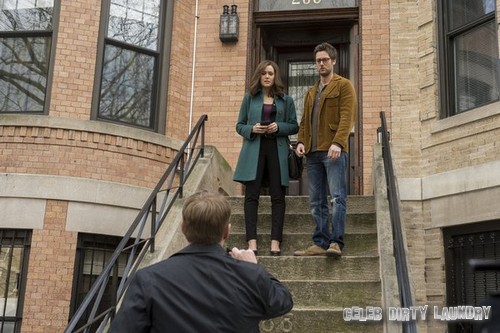 Tonight on NBC their new criminal drama, THE BLACKLIST starring James Spader premiere with its pilot episode.  The show centers around a shady character who, for many years, was known as “The Concierge of Crime.” But now he’s mysteriously turned himself into the FBI, and he carries with him a hard-to-refuse offer: he’ll help them catch some of the world’s baddest baddies, so long as he works exclusively with Elizabeth “Liz” Keen (Megan Boone), who’s fresh out of Quantico.

Here’s the official synopsis for th pisode: WHO IS “RED REDDINGTON?” – SERIES PREMIERE – Ex-government agent and one of the FBI’s Most Wanted fugitives, Raymond “Red” Reddington (James Spader) mysteriously turns himself in to the FBI and offers to give up everyone he has ever worked with including a long-thought-dead terrorist but under one condition – he’ll only talk to newly-minted female FBI profiler, Elizabeth Keen (Megan Boone) with whom he seemingly has no connection. For Liz, it’s going to be one hell of a first day on the job and what follows is a twisting series of events as the race to stop a terrorist begins. Also starring are Diego Klattenhoff, Harry Lennix, and Ryan Eggold.

RECAP: Red Reddington goes to the FBI office and takes off his hat, then his coat and turns himself in. Sirens go off and he kneels down and puts his hands on his head as several armed officers pull out their guns. FBI agents are shocked that it really is Red, but before they talk to him they want everything on him. Red has no country, no political agenda, he will do anything for the highest bidder. Red starts talking to agent Cooper over the camera, he tells him that he can tell them about wanted people that he can find for them, their interests are now aligned. Red tells agent Cooper that he will help him find a criminal named Zumani but first, he will only speak with FBI profiler, Elizabeth Keen.

Elizabeth is late for work, her husband tells her to hurry up because it is her first day and they talk about how it is so very important for them to become a family and have children. All of a sudden, cars and helicopters show up to get Keen and she is shocked. Once in the office, agent Cooper asks Keen what is going on and she clearly don’t know anything. Cooper asks her to profile herself. Keen says she has been with the bureau for 4 years…then Cooper says he read her resume. Keen says her colleagues call her sir, they think she is a bitch. Cooper asks Keen if she thinks it is weird that Red surrenders the day she becomes a profiler. Keen says that she thinks Red may be considering that she is new and he can manipulate her.

Keen is brought into a room to meet Red and he says to her that she got rid of her highlights and asks if she has been back to Baltimore lately. Red tells Keen what Zumani plans to do, kidnapping a daughter of some official. Then Red tells Keen if there is anyone that will give him a second chance it is her. Keen knows all about Red’s past and tells her that he is going to make her famous.

Keen leaves the room and is pissed that Red knew so much about her. Keen calls Tom and tells him that she cannot get away right now, she is sorry. An agent walks up to her and she has to hang up, she tells him the whole day is classified and she cannot talk but her family is the only thing that matters.

The FBI head to a ballet class with Keen where the daughter of the official is practicing, her name is Beth. Keen is in a car with Beth taking her to a safe place when they approach a barricade, there is a road closed and they have to turn around. All of a sudden, a truck hits the car and a man outside starts shooting at them, another man is pouring gasoline everywhere. Keen and Beth are still ok, Keen shoots outside the window. There is a lot of smoke, Keen puts a mask on Beth’s face and tells her the men are going to take her but she will find her. Keen is consumed with smoke, she pulls herself out of the car just as a guy throws something into the spilled gasoline and there is a huge explosion. Beth is gone, the men got away with her on a boat.

The FBI take Red out to look at a board of photographs that they have and he moves them around and recognizes a chemist who he thinks is involved. Red asks Keen to figure out what Zumani desperately wants. Keen figures out that Zumani’s family died and he is looking to settle the score with Beth. Red tells Keen if she finds the chemist, then she will find Zumani. Red tries to negotiate a deal, information for a comfortable hotel room and no hand cuffs.

The FBI soon finds the chemist, while Red is living it up in the lap of luxury with cameras all around watching him. Keen leaves, she needs to take a shower and see her husband. When she walks into the house, she finds her husband and a basket filled with balloons that says “it’s a girl”. She is so excited, she then goes into the kitchen and finds her husband tied up and beaten. Zumani is in her house and wants to know what else she knows about his plan. Sumani stabs Keen’s husband in the leg and tells her that she is not as smart as Red told him she was. Zumani tells her that she has a choice, save many Americans or save her husband, he stabs him again. Zumani leaves and Keen calls 911, she keeps telling her husband that it is going to be ok.

Keen goes to see Red and yells at him because her husband is on a ventilator; she tells him that Zumani told her Red was obsessed with her. Keen is still yelling and stabs Red in the throat, threatens to kill him. Red tells her that if he dies, she will never know the truth about her husband.

Keen is back home and frustrated when she is trying to scrub the blood out of the carpet.

The next day, Keen heads to the office and begs to see the chemist; when she goes into the room she finds him gone.

Red is on the loose, he meets up with Zumani who tells him he paid Keen a visit like he asked and took care of the husband like he asked. Red tells Zumani that the General’s daughter is such a risk. Zumani says that he is giving this day to the children and in sixty years they will be talking about him and his legacy.

Red calls Keen and tells her that Zumani wants more than the General’s daughter. Red tries to get her to remember what happened the day her husband was attacked, she noticed a Zoo tattoo on Zumani, he is planning on hitting the zoo.

Red is at the zoo and finds Beth, they sat her on a park bench and told her to wait for her dad, she is dressed with explosives.

Zumani has a switch in his hand, the FBI finds him and shoots him but not before he pulls the tracking switch.

A friend of Red’s shows up to deactivate the bomb on Beth, Keen tries to keep her busy talking to her. The bomb is deactivated and the guy runs away with it. Red shows up and so does Beth’s father and the rest if the FBI. Red is handcuffed, he turns around to Keen and tells her they make a great team.

The FBI is upset with Red because he let his friend get away with the bomb, Red tells Connor that it was fun and he wants to do it again. Red then tells them that Zumani was only the first name on the list, the Black List. Red says he has been making the list for 20 years of the criminals that matter and Zumani was just a small fish. Red then tells Cooper what he wants and whatever he tells them falls into an immunity package that he creates himself and he will only speak with Keen.

At home Keen is tearing up the carpet with the blood on it and finds a secret trap in the floor, in it is a box and it is filled with money and tons of passports with her husbands pictures on all of them and a gun.

Keen goes to see Red who tells her that he knows she discovered something curious about her husband.