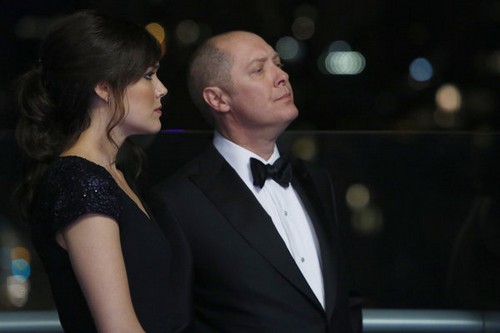 Tonight on NBC their new criminal drama, THE BLACKLIST starring James Spader continues with a new episode called, “The Freelancer.”  On tonight’s show Red and Liz work togehter to track down ad criminal who disguises his killings in the headlines of everyday tragedies.  Did you watch last week’s premiere episode?  We did and we recapped it right here for you!

On last week’s premiere episode Ex-government agent and one of the FBI’s Most Wanted fugitives, Raymond “Red” Reddington (James Spader) mysteriously turned himself in to the FBI and offered to give up everyone he has ever worked with including a long-thought-dead terrorist but under one condition – he would only talk to newly-minted female FBI profiler, Elizabeth Keen (Megan Boone) with whom he seemingly had no connection. For Liz, it was going to be one hell of a first day on the job and what followed was a twisting series of events as the race to stop a terrorist began.

On tonight’s show  Red (James Spader) predicts an impending catastrophe, rooted by the work of an assassin, called “The Freelancer.” Together, Liz (Megan Boone) and Red go undercover to prevent from having his next target, Floriana Campo (guest star Isabella Rossellini) from being killed. Elsewhere, Ressler (Diego Klattenhoff) and newly re-hired CIA agent, Meera Malik, (Parminder Nagra) who’s been added to Red’s private security detail, keep an eye on them from a distance. Meanwhile, Liz considers what she should do next concerning Tom (Ryan Eggold) and the mysterious box she found hidden under the floorboards. Harry Lennix also stars.

Tonight’s episode 2 of The Blacklist is going to be great and you won’t want to miss it.  So pop some popcorn, grab a snuggle buddy, and definitely tune into this hot new series! While you wait for our recap, hit the comments and let us know if you are excited about this new series.

RECAP: We see Red still in chains, then we see Elizabeth asked questions while on a lie detector and then Red as well. Cooper is talking to a group of officials and they are wondering if some how Red is involved with Elizabeth’s husband. Red tries to warn that something terrible is going to happen at the Decatur Industrial Park at 11am. Ressler is on site and soon sees a passenger train that derails.

Elizabeth is at the hospital with her husband and she tells him that she is sure that Red planted the passports and the money; she wishes he was here to defend himself.

Sixty people are dead because of the train crash, Red tells Cooper to listen to him next time and it won’t happen. Red suggests to Cooper that the derailment is an assassination as there was a very important woman on board; but he won’t say anything else unless it is to Liz.

Liz is now in front of Red, she tells him if he screws with her she walks and they are never going to give him immunity. Liz wants to know everything about the train accident, Red says the guy behind it is prolific and has caused other tragedies that are masked behind what looks like accidents. Red tells Cooper and Liz to look closer, there is a pattern. Red reveals that the “freelancer” can be found in Montreal. Liz is alone with Red, she tells him that she thinks he planted the passports and money. Red tells her it’s an impossible situation, she can blame him, but she will always doubt her husband.

Liz is with Red in a car, he tells her they need to eat so they head to a restaurant; they are now in Montreal and Red speaks French.

Red tells Liz to tell him about her job, he is fascinated; he then asks her how close does she think she can get to the truth. Ressler is listening in. Liz reads off Red’s bio to him. Red asks Liz if her husband knows her as much as she thinks she knows him. Liz asks Red if he knew her parents. Red says to Liz, what if I am about to tell you that all the things you thought you knew about yourself was a lie. Red excuses himself for a minute, he walks off, grans his hat and heads out of the restaurant. Ressler and the rest of the team storm in to the restaurant, but they don’t find him.

Ressler gets into an argument with Liz, he is mad that Red got away. Ressler finds Red in their van and he says that he did meet his contact even though Ressler didn’t catch on. Red’s contact gave her the name of the next victim, she is a humanitarian that spent 15 years with the UN. Her non-profit has raised over 25 million dollars to end sex trafficking.  There is a fund raising event coming up and Liz wants the woman to cancel it but she won’t.

Liz goes to Red and tells her that he will no longer help her until the terms of his deal are met. The terms of Red’s deal are met and he gets an invite to the party.  FBI agent Mira Malik has been put on the case to keep an eye on Red. Cooper and Ressler are at the part as well. Liz is keeping an eye on the woman who is the next target who is actually speaking and something looks like it is about to go down. Red tells Liz that the freelancer is in the room and to clear it right now. Ressler runs after him, the guy ends up on a balcony and just before Ressler shoots, he jumps. Ressler is hot after the guy, jumping and running to catch up with him. The guy is now running through the streets with Ressler running after him and Liz has taken over a cab to meet up with them. Liz runs the guy over with the cab.

Ressler interrogates the freelancer and soon figures out that Red is the one who targeted the humanitarian, Floriana.

Now we see Red, he is with the woman and she knows him. He tells her that he never liked her, she says she runs her business and she is whined and dined by the city’s elite. Liz is looking for Red, she heads to the apartment and finds Red and the woman together. Red tells Liz that Floriana is not the woman she thinks she is. Red tells Floriana to tell the truth, she is the one who is trafficking the girls. Floriana hits the floor, Red poisoned her and has the antidote in his pocket but won’t give it to her unless she tells the truth.

Liz and Red are outdoors sitting on a bench; she asks him what he would have done if the anecdote didn’t work. Liz then tells Red that he was right, Floriana was a bad person who was trafficking the girls. Red then asks Liz what she is going to do about her husband Tom? She doesn’t answer.

At home, Liz puts the box she found with the money and passports, back in it’s hiding place under the floor boards. At the hospital, Tom is waking up and Liz gets new carpet put in. We then see Liz wheeling Tom out of the hospital.

In bed at night, Liz is laying there and can’t sleep even though Tom is finally home and safe.

Red is having dinner with friends somewhere, while Liz is sitting on the staircase playing over and over again in her mind the day that Tom got attacked. Liz goes through all the blood soaked clothes, she finds a USB stick with “background profile, Elizabeth Keen”. Liz plays it and Tom is talking about how she didn’t want a biological child, she wanted to adopt. Liz just sits there and cries.