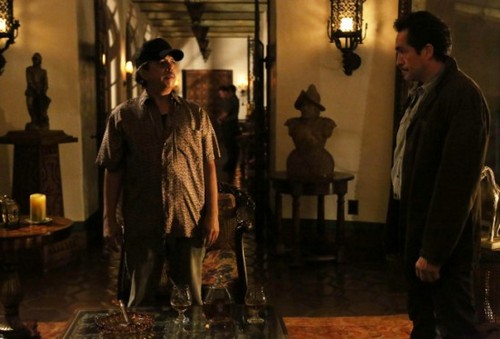 Tonight on FX their new crime drama thriller THE BRIDGE returns with the finale of their first season called, “The Crazy Place”.”  On tonight’s Marco makes a decision that could change everything.  If you missed last week’s show you can read and detailed recap, right here.

On tonight’s show Sonya and Marco search for a missing girl. Charlotte meets someone who knows too much about her new business venture. Marco makes a decision that could change everything.  Tonight’s episode written by Elwood Reid & Dario Scardapane  anddirected by Gwyneth Horder-Payton

Tonight’s episode is going to be another action packed one, which you won’t want to miss, we are down to the last episodes. So be sure to tune in for our live coverage of FX’s The Bridge Season 1 finale — tonight at 10 PM EST! While you wait for our recap check out the sneak peek video below of tonight’s episode!
Tonight’s episode begins now – Refresh Page for Updates

Eva is coming down from some of the drugs the officers must have given her to be obedient but her driver thinks they can fix her up and keep her. That is until another man hands him a gun. It seems there is no retirement for those unfortunate to be caught up in sex trafficking. The driver has to kill and dispose of Eva as if she was nothing.

Sonya wants to work Eva’s case and before she does she wanted to check in with the Lieutenant. Even though he has a soft spot for he can’t help warn her away. For years there has been numerous police force and money driven in to the search for missing girls and women. It’s a dead end. They never get to the head of the snake. That doesn’t matter to Sonya. She wants to look anyway and she was Ruiz to help her.

Ruiz can help her. He already knows why these cases have always been a black hole. That’s because they are dirty cops involved. Even at that very moment, Celia is doing her best to keep her head down. Now that she’s willing to talk she has to be careful.

Ruiz doesn’t go to his captain to talk about the situation. He goes to Sonya. He says he had to go to someone he trusted first. These situations tend to have many layers. Dangerous layers. If they’re going to do this then they have trend carefully.

Another person that was told to take it easy was Daniel. He wants to jump back into the spring of things but instead he was given an assignment on someone’s birthday. He thinks it’s going to boring when it turns out that lady lick must have been on his side. When arrived at the house he and Adriana found the occupant dead. Daniel goes to try and get help when he finds out that a closet stacked with money. Their story just got a whole lot more interesting.

60-65 million was confiscated and half of it was in euros. The feds aren’t talking but someone did send an anonymous bill with a mysterious culprit written on it. Could the case have something to do with Charlotte’s new venture? She did go into a partnership with Fausto. Hate to see that blow up in her face.

Ruiz snuck in Sonya at his station. She was able to find surveillance video of Eva and who Eva was last seen with. A detective Ruiz knows. So Ruiz drops in on him in the other man’s car. He was the man driving Eva earlier. Ruiz did try to ask nicely but he was receiving no cooperation. Ruiz beats the information out of him, whether that was necessary or not isn’t up for discussion, not even from Sonya who witnesses the whole thing. Ruiz learns the first piece of good new yet. Eva is alive.

The man couldn’t kill her when he was told to. He dropped her off at a former monastery that treats the “damaged”. When they find her she isn’t talking but she appears ok. Ruiz knows they have to get Eva out of Mexico. She won’t be safe if she stays. He suggests Sonya help sneak her over the border. Sonya agrees on one condition. These parties that some of the police become involved it must stop.

Sonya leaves the case to Ruiz in the meantime while she takes Eva to Hank. Once she got Eva sttled in she returns to Ruiz’s. She needs to know that his beating won’t become the usual. That he hasn’t changed all that much. He can’t reassure her. Not when she knows what he really what to do is kill Kenneth.

A mysterious man has been following Ray around. The same man then approached Charlotte at the supermarket. He’s not a fed but the “we” he refers to have been watching Charlotte for a long time. They even know about her tunnel. The confusing part is they don’t want her to stop. They want her to make her meeting with Fausto as if business as usual.

No one forgot Steven. They called him to tell him where Eva was and he came out to see her straightaway. As he gets some peace another family loses theirs. There is another missing girl. Adriana’s sister never came off the bus she was supposed to take home. If her case is similar to Eva’s then she won’t be as lucky with her executioner. That man was killed.

In a season finale shocker, Ruiz crosses a line he shouldn’t have. He makes an arrangement with the devil to personally kill Kenneth.