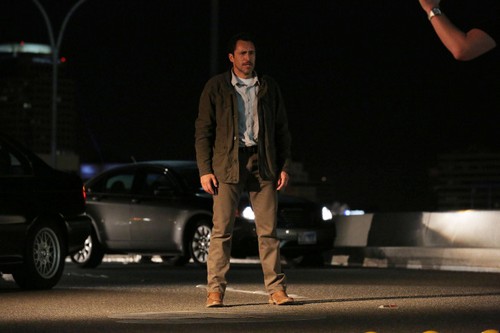 Tonight on FX their new crime drama thriller THE BRIDGE returns with a new episode called, “Take the Ride, Pay the Toll.”  On tonight’s show Killer reveals his endgame.  If you missed last week’s show you can read and detailed recap, right here.

On last week’s show Sonya and Marco closed in on the Killer. Charlotte took drastic measures to protect her ranch. Frye learned that demons from his past were not done with him yet.  The episode was written by Patrick Somerville; directed by Alex Zakrzewski.

On tonight’s show showdown on the bridge as the Killer reveals his endgame. Written by Dario Scardapane; directed by John Dahl.

Tonight’s episode is going to be another action packed one, which you won’t want to miss, we are down to the last episodes. So be sure to tune in for our live coverage of FX’s The Bridge Season 1 episode 11 — tonight at 10 PM EST! While you wait for our recap check out the sneak peek video below of tonight’s episode!

Ray was just dumping the body of once very good friend when he came upon a massacre. It seems the underground bunker several people were enjoying with music and booze has turned into the ultimate dumping ground. Anyone besides Ray would be more than a little freaked out but Ray decides to stage Tim to just another victim. It was cold and yet kind of smart. Hopefully Charlotte would agree the decision he made.

In the meantime David/Kenneth drove Ruiz to the place where his son died. Ruiz could have stopped for help but he didn’t want to risk what would happen to his son. Suddenly Kenneth has decided he’s done talking and he swing his car to stop all traffic on the bridge. It seems his whole plan was going to start where a man named David became the serial killer Kenneth.

If Ruiz thinks now is the time to pull his gun then he’s wrong. Kenneth one upped him by strapping a bomb to himself. However this isn’t the end. Kenneth has one more piece in his game. He releases Daniel from the trunk of the car.

Back at the office, Sonya had only recently admitted to Ruiz meeting with Kenneth when they hear about a suicide bomber on the bridge. Everyone is rushing to make it to the scene. Even Adriana who wants to go with the police both for the story and Daniel. It’s only Sonya that doesn’t want to go. She suspects there’s more to Kenneth’s plan. That and she is taking a lot of painkillers. Probably more than she was supposed to.

On the Bridge, Kenneth revealed the final piece of his plan. He tells Ruiz his son is dying but now by how. He tells him he could save his son. All he has to do is kill Daniel. If he doesn’t then everyone dies. Kenneth already has finger on the detonator.

Ruiz doesn’t want to kill an innocent man. Kenneth tries to convince Ruiz to do it anyway. He tells him all about Daniel’s drug habit. The same habit that is ruining the place Ruiz love so much. But still Ruiz can’t. For one he doesn’t even know if his son is still alive. Gus can be dead by now. Ruiz isn’t going to take Kenneth on trust.
Ruiz refuses to do it. Yet it never mattered anyway. Kenneth shoots Daniel instead. Daniel was trying to run away but he got to the edge of the bridge and the gunshot made him go over into the water. Ruiz’s bravery did Daniel nothing. Kenneth wants Ruiz to become him. That’s how he’ll get his revenge.

Kenneth removes his bomb. He’s hoping the sniper will get him. If they do then Ruiz will never know what happened to his son or so he thought. The pills didn’t affect Sonya negatively. She’s the same brilliant investigator she’s always been. She double checked an old location they had searched. She found Gus. Although is it too late? The water did fill the container to the brim.

Sonya races to the bridge. She finds Ruiz with a gun on Kenneth. Kenneth had told him that Gus was dead. Sonya tells Ruiz she found Gus but she didn’t state it clearly whether or not Gus was alive or dead. Kenneth goaded Ruiz into asking her. Then by implying Sonya was lying which made Ruiz face her when he asked again and again. Kenneth was right. Gus is dead.

Before Ruiz can shoot Kenneth, Sonya shoots and disables him. Then she disarms Kenneth. The officers take Kenneth away but Sonya is left holding Ruiz together. It didn’t matter that Ruiz never got the chance to sink to his level; Kenneth won.

Later Ruiz can’t even look at Sonya. He’s taking out all of his anger at Kenneth on her. She was the one that stopped him from killing Kenneth. That’s why he’s pushing her away and trying hurt her. He tells her they were only ever partners. Never friends.

To anyone else they would know he didn’t really mean it but it’s hard for Sonya to process. Ruiz is grieving. He goes to see Gus in the morgue and even then he didn’t allow himself to fully cry.

The only good news is that Daniel is alive. He’s in the intensive unit but he’s alive. Adriana will by his bedside trying to help in any way she can.