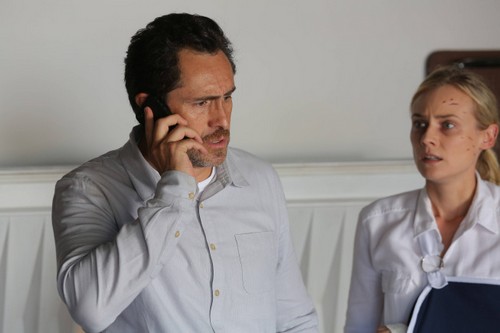 Tonight on FX their new crime drama thriller THE BRIDGE returns with a new episode called, “Old Friends.”  On tonight’s show Frye learns that demons from his past aren’t done with him yet..  If you missed last week’s show you can read and detailed recap, right here.

On last week’s show Sonya pursued a cold lead despite Marco’s insistence that it was a dead end. Charlotte found out that Ray had jeopardized her ranch.

On tonight’s show Sonya and Marco close in on the Killer. Charlotte takes drastic measures to protect her ranch. Frye learns that demons from his past aren’t done with him yet.  Written by Patrick Somerville; directed by Alex Zakrzewski.

Tonight’s episode is going to be another action packed one, which you won’t want to miss, we are down to the last episodes. So be sure to tune in for our live coverage of FX’s The Bridge Season 1 episode 10 — tonight at 10 PM EST! While you wait for our recap check out the sneak peek video below of tonight’s episode!

Gus Ruiz can’t understand why he’s been kidnapped. He awoke to find himself handcuffed in the back of Kenneth’s car. At first, Kenneth seems like he wants to be sympathetic when he asks Gus’s age but when he finds out he was so close in age to his son, all sympathy is gone. He tells Gus his son’s death was punishment for his mother — just the same way Gus’s death will be for Ruiz.

Ruiz is just finding out his son was taken. Sonya has to be taken to the hospital. Meanwhile, Adriana comes upon a drunk Daniel. She tries to get him to at least speak clearly, and she finally gets him to admit his part in David Tate’s tragedy. He was a witness to the accident involving the wife and son, but he got bought off from testifying. He sold himself for a job at a newspaper. Adriana doesn’t chastise him for what he’s done. All she wants is for him to clean up his act and sober up.

Kenneth has grown tired of listening to Gus cry so he uses his stun gun on him before putting the kid in his trunk.

Adriana goes with him to an AA meeting. When it comes time for him to open up, he begins crying while making jokes. Later, he’s outside waiting for Adriana to meet him when he gets injected by a mysterious substance. Kenneth found him and now he wants his revenge.

Alma is angry and she isn’t letting Ruiz off the hook. For one, she doesn’t understand why her family was targeted. Once Ruiz explains the situation, she doesn’t feel comforted. It’s not easy understanding how your husband could easily betray such a close friend. Especially now that the friend has Gus.

Sonya checked herself out of the hospital against doctor’s orders. She has to be there for Ruiz. She feels too guilty that she let Gus get taken on her watch. She also suspects Kenneth may be toying with them for a while over whether he’s killed Gus already. Which proves true when a fresh grave was reported to them. Sonya tries to calm Ruiz down but it’s hard. To him, this isn’t a game — no matter what Kenneth does.

On the other hand, Charlotte heard the reading of the will. All she got was the land and Kate, her lovely step-daughter, got everything else. Now what’s she going to do? Now that she’s a cold blooded killer, she and Ray meet with Tim about the transmitter he planted on her. Tim revealed he’s working for ATF. Charlotte wants Ray to kill him and when he can’t she takes the gun and finishes it herself.

Adriana goes to the police. Although all she saw was a speeding car, it didn’t look like Daniel was driving. She thinks Daniel has been taken and with all the dead leads Sonya and Ruiz have been following at least they get another clue in the puzzle with Adriana’s help.
But Ruiz does have something up his sleeve. He remembers back to the moment when Kenneth mentioned he had an uncle. They go to the house only to find it deserted. Luckily, Kenneth decides to make a call. He’s willing to meet Ruiz, but he has one condition: come alone. Before he meets his arch nemesis though he’s smart enough to grab Sonya’s gun.

Sonya covers for him back at the station but he really does need her. Kenneth loves to bait him and, even after they meet, he feels no remorse. He’s killed so many people out of rage, a rage that he says originated after he lost so much of his family.

Gus doesn’t have the chance to see his father. He’s no longer in the trunk. He’s in a barrel that is slowly filling up with water. Kenneth will probably tell Ruiz where he is when it’s too late.